Frogs are considered by many to be the amphibious version of the proverbial ‘canary in the coal mine’ for planet Earth – a warning to humans of impending doom through their mutations, deformities and extinctions. If that’s the case, we may be in really big trouble with the discovery in a heavily polluted Russian city of a completely transparent frog.

The frog, along with others with multiple limbs and other deformities, was found near the central Russian town of Krasnouralsk in the Sverdlovsk oblast. You know this isn’t a clean place when local reports refer to the “five-kilometer buffer zone of contamination around the city.” Krasnouralsk was formed in 1832 when gold was found there but grew with the discovery of copper pyrites and the building of a copper smelter for processing it. That may be the abandoned chemical plant referred to in the report where hundreds of tons of chemicals and explosives were found. 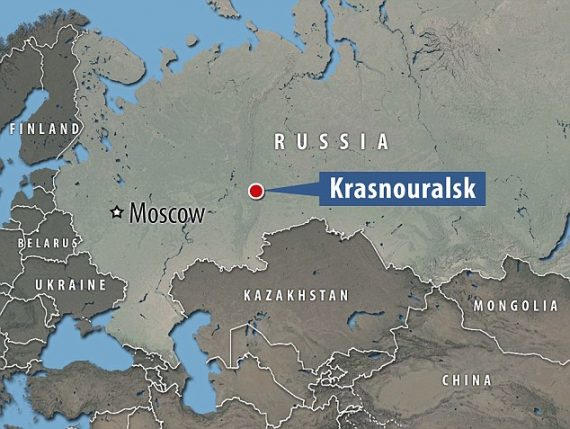 That’s only the beginning. The scientists from the Ural Federal University who captured the frogs say the “orange” lake where they were found was polluted with chemicals from leaks in tanks of oleum (fuming sulfuric acid), and toluene (a benzene solvent). Did we mention that the lake was orange?

Needless to say, Vladimir Vershinin, head of the Department of Zoology Institute of natural Sciences Ural Federal district, was not surprised to find mutants in the orange water. One female frog had extra toes on its legs and extra forearms. The skin of the transparent frog was completely clear, making its skeleton and internal organs (including a beating heart) visible. 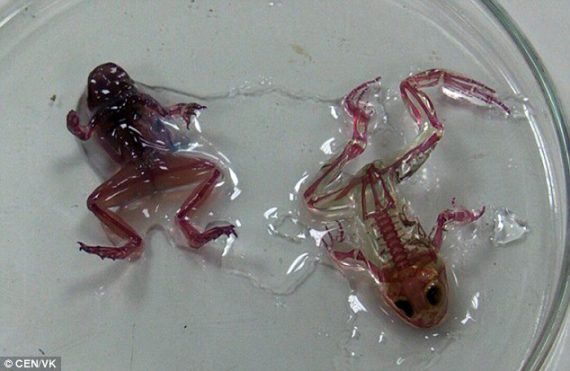 Like a true bureaucrat, Vershinin said tests were being run on the frogs to determine the cause of the mutations and was hesitant to blame the pollution, saying the transparent skin could also have been caused by a parasite. Did he notice that the lake was orange?

Vershinin also said that he would continue to monitor the lake to determine if the transparent frog and the more-than-four-legged one were single anomalies or part of a trend.

Here’s a better idea, Vlad … clean up the ORANGE lake!

Zombie Genes Live On After a Body Dies