For whatever reasons, some locations on this planet of ours seem to have a habit of drawing things in to be erased. It is in these places where forces beyond our control or understanding conspire to lurch forth to suck in those foolhardy enough to venture there, and quite often nothing remains to allow us to piece together what has happened. Many people have heard of the Bermuda Triangle, but what many others might not realize is that this just one of many such predatory places that inhabit various areas around the world. One such place can be found in China, where the largest lake in the country has long earned itself a reputation as not only a place where things launch off into oblivion, but also a wellspring of high strangeness that continues to baffle and stir the imagination to this day.

Sitting within the rugged beauty of rural Jiangxi Province, China, is Poyang Lake. At an average size of around 3,500 square kilometers (1,400 sq. mi), it is China’s largest freshwater lake, and is an essential stop off point for millions of migrating birds every year, as well as the habitat for the very rare freshwater finless porpoise, locally known as the jiangzhu, or “river pig.” In addition to this rich biodiversity, the lake also has a rich history spanning centuries. The formation of the lake in around 400AD occurred when the Gan River backed up to flood the countryside, dramatically swallowing Poyang County and Haihun County, creating a mass exodus of people looking to escape the relentless invasion of the growing lake and its hungry waters. At one point, during the Tang Dynasty, the phenomenal growth of the lake caused it to swell up to a vast area of 6,000 square kilometers (2,300 sq. mi), and its unstoppable formation was responsible for the prosperity of Wucheng Township, in Jiangxi Province, which benefitted from the influx of settlers on the run from the ravenous infant lake.

In 1363, Poyang Lake was the scene of perhaps the largest and bloodiest naval engagement in history, when the massive fleets of the Ming and Han dynasties clashed here during the final days of China's Mongol-led Yuan Dynasty, in what would come to be known as the Battle of Lake Poyang. The intense battle made heavy use of the relatively new technology of firearms and gunpowder for warfare, as hulking floating fortresses called tower ships lurched at and battered each other in ferocious naval combat. In the aftermath of the fierce battle the Ming would emerge victorious, take control of the country, and the leader Zhu Yuanzhang would become the first emperor of the powerful Ming Dynasty.

The lake’s somewhat sinister and violent history is punctuated by a persistent mystery which surrounds it, as it is here where ships have long ventured out to never return, so many in fact, that Poyang Lake is often referred to ominously as “The Bermuda Triangle of the East,” or additionally “The Waters of Death” or “The Place of Death” by locals. One of the strangest such disappearances occurred during World War II, when the Japanese invasion and occupation of China was in full swing. On April 16, 1945, an enormous, 2,000 ton Japanese cargo vessel, the Kobe Maru, along with around 200 troops, was making its way across the lake near Laoye Temple, loaded with stolen treasure, precious artifacts and loot when it inexplicably sank under totally clear conditions. In the wake of this mysterious sinking, the Japanese Navy allegedly sent a salvage team of seven divers to go recover the ship’s valuable cargo, yet only one of the divers survived. When the lone diver was retrieved, he was allegedly speechless and overcome with terror by something he had seen down in the depths. The diver is said to have never divulged what had  happened, and indeed is reported as having been rendered morose, unresponsive, and driven insane by the mysterious ordeal. None of the other divers or indeed any of the crew or even a scrap of the Kobe Maru were ever seen again. 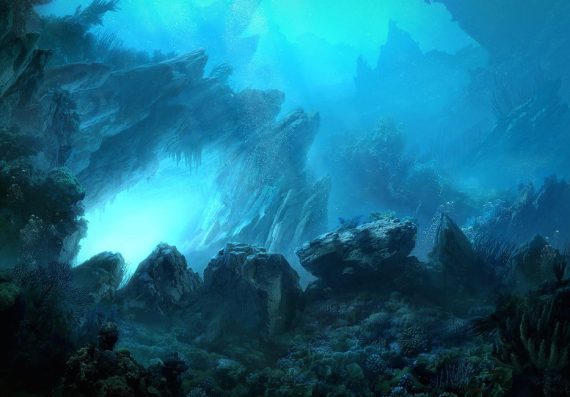 When the war ended, the Chinese government went about trying to salvage the ship, hoping to regain some of the precious antiques and relics that had been stolen from them by the Japanese. The Chinese hired the American salvage expert Edward Boer to find the wreckage, but not only did he fail to find any sign whatsoever of the wreck after an exhaustive one-month search, but several divers are said to have disappeared without a trace. Making this whole case more bizarre is that the ship is estimated to have sunk in only 30 feet of water in the mostly shallow lake. Boer himself remained quiet about the whole search decades later, when he published a rather strange account in the United Nation Environment News. Over the span of the article, the events depicted become increasingly more bizarre. Boer claims that as he was diving with his team there was a blindingly bright light that stabbed up from the murk below, followed by an ear piercing, unearthly screeching sound. He explained that the lake itself seemed to be shaking and that they were being pulled in by some unseen force. Boer would claim that he had managed to pull free of the strange vortex sucking them in, and when he reached a distance witnessed in horror as his team dissolved away into a pulsating bright light on the lake bottom.

The vanishing of the Kobe Maru and the divers who subsequently went to search for it are by no means the only victims of the lake, and these waters have devoured countless fishing boats, pleasure boats, cargo transporters, and military vessels. During the period from the 1960s through the 1980s, a startling 200 ships mysteriously vanished here, along with an estimated 1,600 people, all of which have never been seen again. One clear day on Aug. 3, 1985, a total of 13 ships vanished without a trace in a single day. The few who have managed to come back to tell the tales are often beset with lost memories, lost time, profound disorientation, and chronic mental illness, even stark raving insanity. Boats have continued to go missing at Lake Poyang even up into the present day. In 2001 a large cargo ship carrying sand was suddenly swamped by a sudden large wave in otherwise calm conditions and sank without a trace. One particularly strange recent case comes from March of 2010, in which a huge, 1,000 ton vessel suddenly sank on a clear, calm day near shore for no discernible reason. Its wreckage was never located. 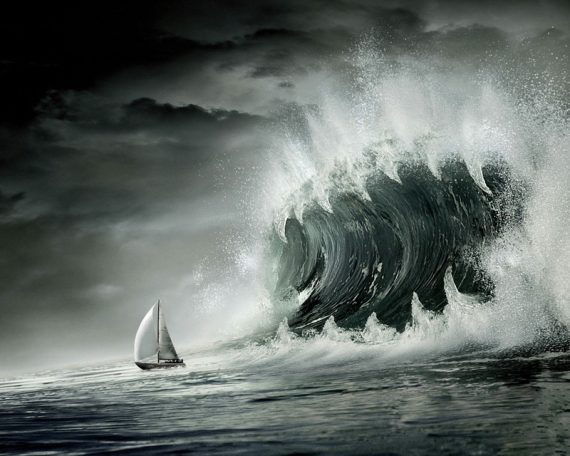 The strangest thing about these disappearances, besides the sheer number of them and the calm conditions under which they typically occur, is that in a relatively shallow lake with an average depth of only 8.4 metres (28 ft) there should be easily found wreckage and remnants of these ships all over the place, yet there are none, despite numerous expeditions that have scoured the bottom here looking for signs of them. One researcher at the Nanjing Institute of Geography and Limnology who has spent considerable time trying to unravel the mysteries here, a Jiahu Jiang, has expressed puzzlement at this, saying that with such a number of reported missing ships on the lake the lack of any wrecks or human remains is “unimaginable.” The only hint of wreckage ever found here was in the early 2000s, when an underwater archeology expedition used advanced sonar equipment and sand pumps to locate 16 magnetic anomalies scattered about the bottom. One of the anomalies was found to have the outline of a ship, but only a few scraps of wreckage were ever recovered. Why are remnants of so many sunk ships on the lake so sparse? Has the lake itself digested them to never be seen again?

In addition to ships and divers being swallowed up by the lake, there have been other curious disappearances and oddities here as well. In 1977, three dams were built here, with the largest being 2,000 feet long, 165 feet wide, and 50 feet high. One day this enormous dam is said to have just disappeared, leaving not a scrap behind. Another bizarre case is that of a salvage diver named Shen Dahai, who vanished while unsuccessfully searching for wrecks on the bottom. Reports allege that his body was found the following day floating about in Changba Shan Lake, which is odd considering this lake is 15km away and in no way connected to Poyang Lake. Adding to these mysteries are countless reports of sudden rogue tidal waves, strange roving whirlpools, underwater lights, UFOs, spontaneous violent lightning storms that abate as abruptly as they started, and mysterious shadowy lake monsters. 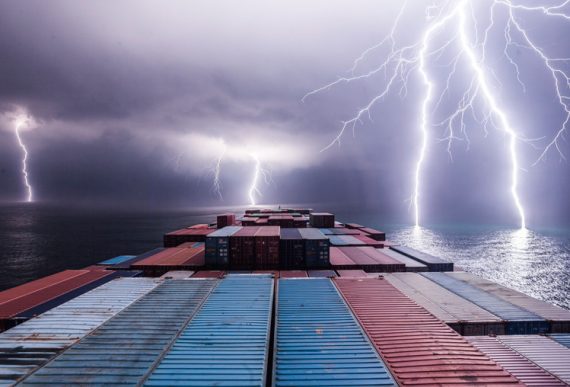 There have been numerous theories on what is going on at Poyang Lake, ranging from the sensible to the absurd. One idea is that the sinkings are caused by suddenly forming sandbars, at least one of which has been discovered through aerial imaging. Ships might have either crashed against the sandbars directly or been affected by whirlpools generated by the currents churning around them. However, this still fails to explain the curious lack of any wrecks. Others have blamed spontaneous inter-dimensional portals, strange vortexes, earthbound black holes, unexplained magnetic anomalies, freak lightning strikes, supernatural forces, or of course alien abduction. Many of the more fringe theories on the disappearances of Poyang Lake point to its location upon the 30 degree north latitude. This is significant because there are many ancient places of importance that are also located here, such as the Pyramids of Egypt, as well as other notorious places of mysterious vanishings that lie along roughly the same latitude, such as the infamous Bermuda Triangle itself.

What lies behind the mysteries of this place? Is this some point anchored to mysterious forces we will never grasp? Is it merely a place plagued with intense deadly natural phenomena that have launched it into spooky legend? Or is it a location that is, for lack of a better word, just plain evil? Is it possible for a place to harbor malevolent intent? Whatever the answers to these questions may be, the wrecks of Poyang Lake, as well as its many victims, remain lost, its secrets remain elusive, and its mysteries alive and well.