Mystery Light Over Texas Resembles 1980 Cash-Landrum UFO… Or Does It?

In 1980, one of the most perplexing UFO incidents in American history occurred, on a winter's evening by a narrow country road near Dayton, Texas.

The date was December 29, 1980, and Betty Cash was driving with her friend, Vicky Landrum, and Landrum's seven-year-old grandson, Colby. The group had been on their way back home after dinner, driving along what is known locally as Farm to Market Road 1485. The crew had been entertaining the idea of a game of Bingo, but on this occasion all the usual spots were closed, since it was just prior to New Year.

The case is, of course well known, although I do feel that some new details may have emerged over time (and for a great overview on this, I recommend researcher Curt Collins' resource guide on the case, which can be viewed here). In spite of the few general conclusions about the case that might be made, back in October I noted that, "despite all the seemingly substantive evidence this case provides, barely a clue has emerged as to what the origins of the object may have been, let alone the source of it’s apparent military escorts: a fleet of helicopters which, if they existed, have yet to be accounted for, given their numbers, and the timeframe during which the witnesses described seeing them."

I have my own suspicions about what Betty Cash and the Landrums may have seen, although we can't be entirely certain, even with the passing of many years, and the hope for new information. And on the subject of "new information", a new piece of video footage comes to us courtesy of the UK tabloids, as well as the YouTube account SecureTeam10, who has been getting a fair amount of negative attention lately after widespread viewing of certain footage the account has featured was called into question.

The Mirror in the UK reported on the incident that:

"This new clip was recorded by a man, identified only as Steve, who works as a director of aircraft maintenance for a corporate jet fleet in the USA.

He sent the footage to SecureTeam10, a group of UFO experts, who analyse the footage and share their findings online."

While they refer to SecureTeam10 as a "group of UFO experts" here, it would seem that the account is mostly (if not entirely) operated by Tyler Glockner, who was quoted by the Mirror saying, "It's amazing, and there is no doubt in my mind, that this UFO looks identical to the one recorded in the Cash-Landrum incident."

What is truly amazing is that the comparison between the Texas "mystery object" and the Cash-Landrum UFO has been made at all. Below is a screen-grab of how the recent Texas object appeared, after a bit of digital editing had been applied to help emphasize the object's alleged shape: 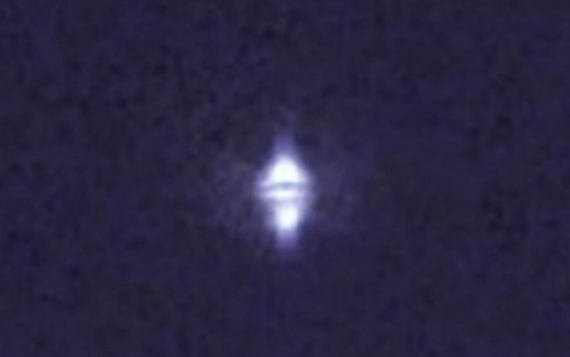 While the image depicts something vaguely diamond shaped, it would be a bit of a stretch to presume that this looks anything like what was purportedly witnessed at the time of the 1980 incident: 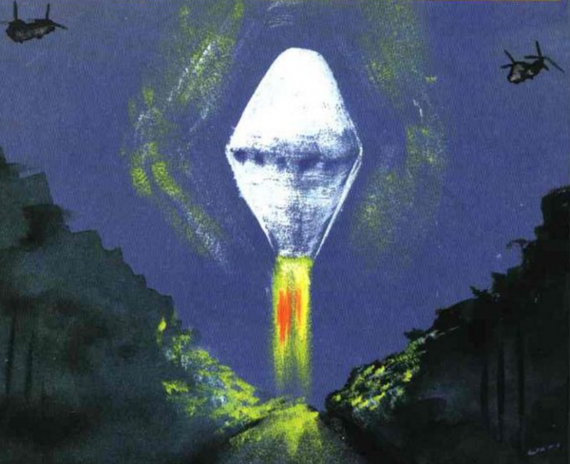 Sure, there appears to be a superficial resemblance. However, while much of the literature suggests today that the original 1980 object was "diamond shaped", this may not have actually been the case at all.

During a conversation with Curt Collins about the incident, he explained that the rhomboid shape may have been based on a description that Colby Landrum gave, who we should recall, remained in the back seat of Betty Cash's Oldsmobile Cutlass throughout the majority of the encounter. Collins further notes that the way Cash and Landrum described the object in their initial recollections had merely described it as "balloon like". This description had, in part, informed my speculation that the object in question might have actually been something along the lines of a thermal infrared emitter source, which appeared suspended in the air due to it's possible use as an inflation device for a military balloon. If this sounds like a stretch, one may need to look no further than U.S. patent US 3837281, filed in April 1969, which detailed a thermal infrared emitter source designed precisely for this sort of purpose: "as means for supplying hot gas for the quick inflation of a closed balloon."

This may not conclusively explain all of the aspects of the case, and in truth, I try to abstain from asserting that, so many decades later, we can suddenly claim we've "solved" another UFO cold-case... after all, there are plenty of the more hardened UFO "debunker" types that engage in this sort of speculative "solving" of cases on a frequent basis. Nonetheless, with the questions that remain about the case, is it really fair to try and compare the Cash Landrum case, with all its complexities, to a video of an amorphous light seen from a plane as it passed over Texas?

Whether or not one thinks it's "fair", it's certainly not helpful. No, the object filmed over Texas isn't "eerily similar" to anything that was seen over Texas back in 1980, and no, making that comparison doesn't help "prove" anything or reveal anything more to us about what Cash and the Landrums saw, nor what was recently filmed over Texas from the window of a plane. The only way to get to the bottom of UFO a case like the Cash-Landrum incident is to look for facts related to that case, and make our best assessment based upon these details.

So please, tenuous similarities to spurious sources should be left at the door!

Calling the Operators: Do We Live In a Computer Simulation?