It may look pretty and it may have a non-mysterious explanation, but researchers studying the pink snow that now covers ice at both of Earth's poles and decorates many of the world's glaciers say it’s not a good thing and may be contributing to the rise in ocean levels. Is it time to ignore the yellow snow rule and start eating the pink stuff?

You know things are serious when scientists feel the need to name the condition. In this case, rapidly melting ice caused by pink snow is now being called the “bio-albedo” effect. Stefanie Lutz from the German Research Centre for Geosciences GFZ explains it in a study published by Nature Communications.

The pink snow is caused by red snow algae (Chlamydomonas nivalis). Its spores are found in the snows of Greenland, Antarctica, Iceland, the Alps and other frozen areas. When snow melts begin in spring and summer, the red algae appears, mixes with the snow and turns the landscape into a lovely pink. Unfortunately, pink is not a good color for snow as it affects albedo – the reflection of sunlight by white snow and ice that keeps it frozen in warm conditions. When the algae turns the snow reddish and dark, it negates albedo and causes the snow to absorb more heat and melt … the “bio-albedo” effect.

If pink snow has been going on for eons, why are scientists suddenly concerned now? Lutz explains that new research on 21 glaciers in the European Alps shows that the melting effect of the red algae/pink snow has been grossly underestimated. Her study found that it causes the albedo to lose 13 percent of its area in one melting season. Even worse, not much is known about the red algae, especially how big it can actually get and how much glacial surface it can cover, says Lutz. .

Based on personal observations, a conservative estimate would be 50 percent of the snow surface on a glacier at the end of a melt season. But this can potentially be even higher.

Can anything be done to stop the pink snow before it bio-albedos us under rising coastal waters? Lutz warns not to hold your breath.

The algae need liquid water in order to bloom. Therefore the melting of snow and ice surfaces controls the abundance of the algae. The more melting, the more algae. With temperatures rising globally, the snow algae phenomenon will likely also increase leading to an even higher bio-albedo effect.

So pink snow, glacial meltdown and rising oceans is a vicious circle fueled by climate change.

On second, thought, may be you SHOULD practice holding your breath. 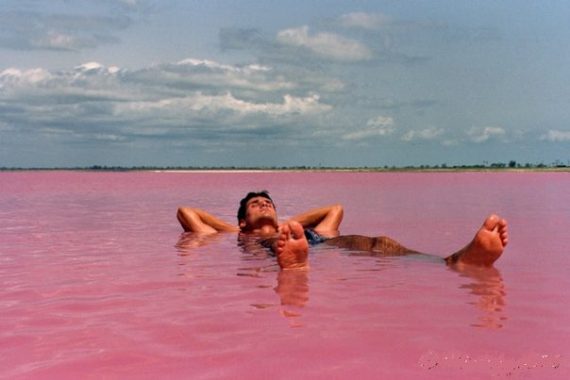