Project Drudge: Is America’s Most Reclusive Newsman a UFO Enthusiast?

Since 1996, what is known today as the news aggregation website Drudge Report began featuring daily dossiers of trending news items from around the web. Though it initially launched as a gossip-themed email news service headed by then-Hollywood based journalist Matt Drudge, a website soon followed, gaining national attention for its release of breaking stories that included presidential hopeful Bob Dole’s running mate, Jack Kemp, in 1996, as well as the Monica Lewinski scandal two years later.

Drudge’s site is generally viewed as right-leaning politically, though it has also carried (or refrained from carrying) a number of stories in the past that some commentators have viewed as being beneficial to Democratic candidates as well. Writer John Ziegler went so far as to say in 2012 that Matt Drudge “intentionally ignored negative stories to help elect Barack Obama.” Drudge has similarly carried stories in the past that suggested leads or tips supplied by the campaign of Obama’s then rival, and current Democratic front-runner today, Hillary Clinton.

Four years later, Clinton is still managing to get front billing from Drudge, despite the eccentric and reclusive website owner’s apparent support for unlikely GOP front-runner Donald Trump. Though in truth, it would seem that links to articles about Clinton appearing on Drudge Report today sometimes have less to do with her politics, focusing instead on what is arguably the most unique campaign promise made by any of the 2014 presidential hopefuls: Clinton has pledged to “get to the bottom” of government involvement with UFO secrecy, aiming to disclose secret files on anomalous aerial phenomena, in addition to turning a watchful eye toward the operations of the notorious Area 51, a U.S. Air Force Base located at Groom Lake, Nevada.

This may not be surprising, in truth, since in the past it would seem that Matt Drudge has consistently shown an interest in the subject of UFOs, headlines about which he has frequently featured at the Drudge Report site. Looking deeper, one might even speculate that the site’s name is derived, albeit loosely, from a small portion of American UFO history.

As far as official inquiries into UFOs by the American Government goes, among the many carried out by the USAF had been Project Grudge, a short-lived investigative inquiry into the possible reality of unidentified flying objects in the late 1940s. Grudge succeeded an early outfit called Project Sign in February, 1949, officially lasting until December of that year, despite some minimal work that lasted until the later part of 1951. Project Grudge was later replaced with the USAF’s more famous Project Blue Book, which lasted until 1968.

So what does any of this have to do with Matt Drudge? Well, in August 1949, Project Grudge issued its official report, which, at more than 600 pages in length, was known rather simply as “The Grudge Report.” Among the report’s conclusions had been that 1) no evidence suggested UFOs represented “an advanced scientific foreign development”, and that because of this they did not appear to represent a threat to national security.

The report further advised that:

“All evidence and analyses indicate that reports of unidentified flying objects are the result of: 1) Misinterpretation of various conventional objects, 2) A mild form of mass-hysteria and war nerves, 3) Individuals who fabricate such reports to perpetrate a hoax or to seek publicity, and 4) Psychopathological persons."

The mere similarity alone between the names of the “Grudge Report” and Matt Drudge’s present-day website may not be enough to suggest anything more than a tenuous, and perhaps unintentional similarity between the two. However, as noted earlier, UFO reports appearing in the tabloids have been, and continue to be mainstays of Drudge Report headlines; just to illustrate this, as the present article was being composed, the seventh headline down, appearing on the Drudge Report's furthest-right column, reads, “Space Station footage shows 'fireball-like UFO’…”.

There are, of course, many such instances where UFO-related stories appear to have been given at least decent billing at the site, as noted in March when Gawker writer Rhett Jones observed that, “Today while the political world is fixated on a salacious tabloid story about Ted Cruz, eccentric news site operator Matt Drudge is concerned about aliens. He’s not the only one.” This remark coincided with a Drudge main headline highlighting (once again) Hillary Clinton's UFO ambitions. 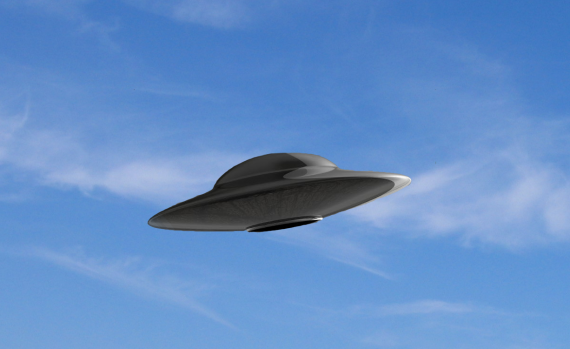 In 2012, Drudge's links to UFO-related headlines leading up to the much-anticipated end of the Mayan calendar resulted in headlines such as the following Examiner.com story: "Does Matt Drudge Believe in Doomsday 2012 and UFOs?", in which the author asked, "Over the last week or so, even Matt Drudge has felt the pull of the upcoming fateful "Doomsday" date of December 21, 2012. Is he a believer?" In truth, it would at least seem that way.

Elsewhere, in the book A Culture of Conspiracy: Apocalyptic Visions in Contemporary America by Michael Barkun, the author notes that an even earlier instance appears where a 9/11 conspiracy theory involving a purported UFO gained momentum after the story appeared at the Drudge Report site:

“The UFO legend resulted from a video taken of the second plane’s impact in New York. The video, circulated by the Gamma Press USA Agency, was picked up by the widely read Web site run by Matt Drudge, the Drudge Report. Immediately after impact, a long, thin object tilted at a forty-five degree angle appeared to the right of the towers. To some, it resembled a UFO approaching edge-on. It was in fact either debris or some object that momentarily passed in front of the lens; but the credulous found it to be unassailable evidence of UFO involvement.”

As far as actual statements by Drudge on the subject of UFOs, little appears on the web, apart from the following statement attributed to Drudge in which he argued the importance of the Internet in its earlier days. "I remember having this argument with Brit Hume once live on C-SPAN," Drudge recalled. "He goes, ‘the Internet’s all UFOs and all this crap.’ And I said, ‘no, the Internet is what you make of it.’ "

Hume was right though, to an extent, since the early Internet did quickly manage to become a haven for UFO forums that bred new lines of speculation on the subject, and providing a new platform for those in a field whose most influential voices had once relied on print publications and newsletters. Of course, this is part of the phenomenon of the Internet in general: the way that it has leveled the playing field, so to speak, and given a voice to independent sources of information... whether they be politically-themed news sites, or UFO sites and blogs aimed at unraveling the truth about "what's out there," and whether our governments are hiding the truth about it from us.

As far as things go with Matt Drudge, however, it might be that he's just a bit of both: right-wing political commentator and news aggregator on one hand, and part-time UFO-buff on the other.

Origin of Underwater Lost Greek City Has Been Found