What’s the best bait for catching blind catfish? The answer may provide additional clues as to why, for the first time ever, an extremely rare eyeless catfish previously only found in Mexico has been discovered in a Texas cave. Could this be proof of the missing link under the Rio Grande between the vast caverns of Mexico and the U.S.?

A pair of endangered Mexican blindcats (Prietella phreatophila) were discovered in May deep in a limestone cave at Amistad National Recreation Area near Del Rio, Texas. Del Rio is 150 miles west of San Antonio. The Mexican blindcats are tough to spot because their skin is a pale pink color - translucent enough to see blood through it – and they live only in the groundwater of deep caves.

Since the 1960s there have been rumors of sightings of blind, white catfishes in that area, but this is the first confirmation. I've seen more of these things than anybody, and these specimens look just like the ones from Mexico. 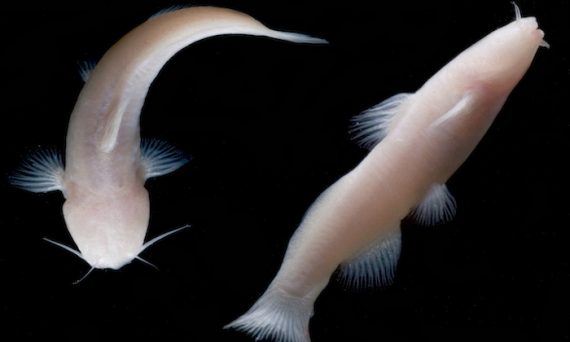 Dean Hendrickson, curator of ichthyology at The University of Texas at Austin, said this about the two specimens brought to him last month by spelunker and National Park Service resource manager Jack Johnson, who first spotted the tiny (maximum length 3 inches) Mexican blindcats in April 2015. They were seen again in May 2016, caught and taken to the San Antonio Zoo, where they are now in a special subterranean wildlife aquarium for study, says biologist Peter Sprouse

Cave-dwelling animals are fascinating in that they have lost many of the characteristics we are familiar with in surface animals, such as eyes, pigmentation for camouflage, and speed. They have found an ecological niche where none of those things are needed, and in there they have evolved extra-sensory abilities to succeed in total darkness.

The Mexican blindcat was first found and identified in 1954 in wells and springs in the northern Mexican state of Coahuila. It’s listed as an endangered species by the Mexican government and as a foreign endangered species by the U.S. Fish and Wildlife Service. There are two other species of blind catfish found in the U.S. - the toothless blindcat (Trogloglanis pattersoni) and the widemouth blindcat (Satan eurystomus) – and both live in the Edwards Aquifer – the massive freshwater aquifer under San Antonio.

How did this pair of Mexican blindcats stumble (swimble?) into a Texas cave? Geologists have long suspected that caverns underneath either side of the Rio Grande River may be linked, creating a path between the Edwards aquifer and similar aquifers on the Mexican side of the border. While this is not definitive proof, it’s the most credible evidence to date. Johnson says it’s also evidence, at least for now, that the critical aquifer is healthy.

Aquifer systems like the one that supports this rare fish are also the lifeblood of human populations and face threats from contamination and over-pumping of groundwater. The health of rare and endangered species like this fish at Amistad can help indicate the overall health of the aquifer and water resources upon which many people depend.

If we can’t figure out how to keep the aquifer healthy ourselves, perhaps this is truly a case of the blind leading the blind.

First Human Test of CRISPR Gene Editing in The Works