In the summer of 1985, a strange light was observed by thousands of onlookers as it passed through the skies over Santiago, Chile. Among the observers present, a number of them believed they knew the origins of this seemingly "alien" craft, thanks to a story that had risen to popularity after appearing on the Chilean television program Ovni, which dealt with a mysterious island off the Southwest coast of Chile.

This object, they believed, belonged to the strange inhabitants of a place called Friendship Island.

Researcher Diego Zúñiga summarized the incident in an article for the Chilean magazine La Nave de los Locos, which also appeared later at the Magonia blog. In it,  Zúñiga notes that the incident became so sensational that, "the news department of Television Nacional de Chile, channel 7, used a special camera to record the object on videotape." The object, however, was later revealed to have had earthly origins, and nothing having to do with the supposed "Friendship": it was merely a weather balloon, released as part of a French stratospheric research project one month earlier.

"Too many people refused to accept the sad reality," Zúñiga wrote, "and today they still insist that it was, in fact, a ship manned by inhabitants of Friendship Island."

Indeed, the majority of the sources of information available on the web that discuss the sordid details of the Friendship Island affair still attribute the entire things to "alien beings" who, rather strangely, were said to resemble humans of Nordic appearance. Based on this description, a variety of alternative theories have emerged as well that suggest everything from a secret base where escaped Nazis were keeping various technologies hidden, to more fanciful ideas about a joint-project between these Germans and American intelligence agencies, collaborating on a South American equivalent to Nevada's most infamous USAF installation, Area 51.

Apart from all the speculation, it is hard to know what to make of the Friendship Island stories. Back in the summer of 2012, I wrote a short piece on it here at Mysterious Universe, which despite only recounting a few of the most basic details of the case, went on to become one the of more popular English-language articles on the subject; in truth, this says much less about the depth of the article in question, but rather, it shows us just how little is known of the Friendship case outside the Spanish-speaking world.

In that original article, I detailed the essentials on how the story of the Friendship Island affair began, which presents most of the story's key players:

It was 1984, someplace near the Southern coast of Chile, and a mysterious distress signal had just buzzed across the receiver of ham radio operator Octavio Ortiz. A business agent who operated a small 27-megacycle CB station in his pastime, Ortiz, who went by the ham operator’s handle Lucero or “bright star,” was mystified by what he was hearing, as it seemed to have to do with a bright celestial object of an entirely different kind.

The captain of a ship called the Mitilus II had been sending these strange messages Ortiz had intercepted, which pertained to an object in the sky it had been following… or perhaps, had been followed by. The Mitilius II was tasked under the Department of Oceanography for the nearby University of Chile, and had been in an approach for the Mitague lighthouse when a strange, bright object had appeared in the sky, then slowly began to descend. By the time Ortiz had come across the messages from Alberto, this strange object was now hovering directly over the distressed captain’s ship.

Shortly after Alberto's distress messages were received by Ortiz, the light over his ship had apparently already gone. However, Alberto and Ortiz remained in communication after the incident, via their CB radios, and it was eventually related by Alberto that he had been hired by a group of foreigners for various smuggling jobs off the southwestern coast of Chiloe Island. These men, Alberto claimed, had taken him to a strange island where an underground facility existed, and after fitting his ship with various odd electronic equipment, tasked him with various jobs for them. Alberto had been introduced to these "gringos", he said, by a man named Ernesto de la Fuente, a central character within the broader "Friendship" narrative, as he had not only claimed to have met the Friendship on many occasions, but had also been taken to their island and, incredibly, cured of cancer by the technologies they possessed.

Ernesto de la Fuente had risen to fame in Chile after he appeared on the Ovni episode detailing the weird story of the Friendship, although he had made earlier television appearances as well: one Chilean program from the mid-1990s depicted de la Fuente as an experiencer of various paranormal or "ghostly" phenomenon. For some, it had been de la Fuente's ongoing experiences with the unexplained that seemed to diminish his credibility, although shortly after publication of my MU article, my colleague and fellow blogger Miguel Romero (also known as Red Pill Junkie) and I shared a brief exchange with de la Fuente's nephew, Francisco Ilabaca, who now resides in the United States. Ilabaca was able to confirm, based on family information, certain details about the case:

"Ernesto De La Fuente is my great uncle. I've been trying to contact him but I now live in the US. According to my mother, the cancer was real. After the chilean tv show OVNI aired their story, he received countless phone calls and was constantly harassed for information by people wanting to get cured. Eventually he moved to the north of chile to a secluded town in the interior of the country, and converted to Mormonism. I haven't talked to him or my aunt in years. He was also involved in a famous ghost apparition case in Chile that aired on TV. His first wife shot herself in their home and would appear from time to time. I spent many weekends of my childhood playing in that house, and only remember one weird incident."

The stories about Friendship Island would continue, however, even beyond the involvement of Ernesto de la Fuente and the other initial players. Researchers Scott Corrales of the Hispanic Institute for Ufology, as well as researcher Raul Nunez, have continued to collect reports that appear to be somewhat related to the case (a number of these can be read here, and admittedly, some of the stories are quite fascinating).

My personal research into this case, while leading me to believe it has very little (if anything) to do with UFOs, has nonetheless left an impression there is still something to the entire affair. Little-known as it is in the United States, it was suggested to me by researcher Peter Levenda during an email exchange, and a subsequent Skype conversation, that the case does appear to bear some similarities to Levenda's own experiences in Chile decades ago, when he visited a secretive -- and infamous -- commune in the Maule region of central Chile known as Colonia Dignidad.

Today, the location in question is called Villa Baviera, although at the time Levenda went there in the late 1970s, it was a hideout for former Nazis that included Paul Schäfer, an accused child molester who had served as the colony's leader and central figure. Levenda believes he was mistaken for being an Israeli Mossad agent, which led to him being detained briefly upon arriving, and thereafter ordered to leave the country.

Although little is said of Friendship Island in the English speaking world (Levenda, at the time he contacted me, had apparently not heard of it either), there are still occasional threads that turn up elsewhere. For instance, I managed to find a very peculiar English-language advertisement that appeared in 2009 in a newspaper called El Llanquihue, published in the community of Puerto Montt, Chile (near the alleged location of Friendship Island. Below is an image of the advertisement, which apparently ran for close to three weeks: 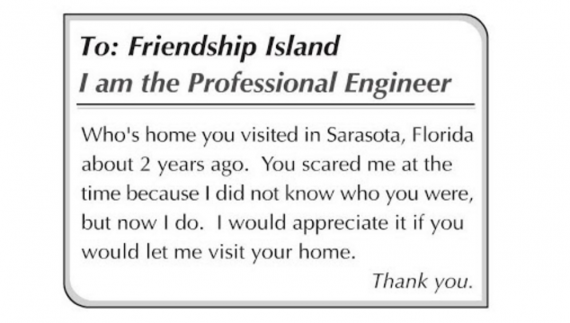 This is indeed a rather tantalizing clue to emerge, in the midst of an already odd case that, to the most skeptical among us, represents little more than another phony story around which a hopeful "UFO religion" has been slowly built in South America. Who knows, perhaps there is more to it after all... although as I stated previously, my feeling is that this case, and the grains of truth it represents, have much less to do with UFOs, aliens, angels, or miraculous healings, and instead probably represents another piece of the bigger puzzle that comprises secret, Cold War-era operations that were taking place in South America... some of which probably did, in fact, have something to do with the German presence there after World War II.

As always, I invite anyone who may have their own ideas on any of this to contact me about it via email, or you may, of course, use the comments section below this post just as well.

The UFO Phenomenon: Science, or Conspiracy?