A lake in Russia vanished overnight and all that’s left is a little hole in the ground. Locals are hoping the water comes back and stays, not like a lake in Oregon that just had its annual disappearance. Where is all of this water going and why?

According to local news reports, Lake Peschёra is – or was – a 200 meters (656 feet) wide, 9 meters (30 feet) deep body of water in a forested area of Ostashata, a village in the Perm region of Russia near the Ural Mountains. Residents reported the fishing lake unexpectedly disappearing overnight, with nothing left in the morning but puddles and a hole – not even any fish. They fear the same fate may be in store for nearby Lake Lyubimov. 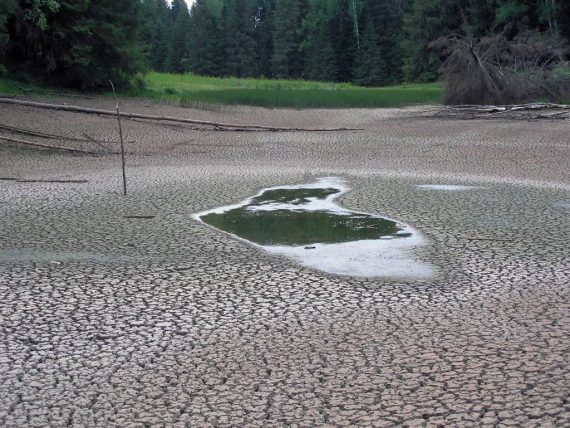 What opened the hole and where did the water, fish and anything else floating in Lake Peschёra go once it drained into it? One theory is that a recent 4.1 earthquake in nearby Sverdlovsk opened it. Another is that fracking or drilling in the area caused the lake to collapse. The area is also known for caverns and one of those events could have cracked a hole in the ceiling of one. Whatever the cause, the final resting spot of the water had to be big to drain the entire lake so quickly. So far, no one has reported find finding the water or fish.

Will it come back? If the area is like Linn County, Oregon, it might. That’s the home for most of the year of Lost Lake, an 85-acre, 9-foot (3 meter) deep lake 75 miles east of Albany that disappears every summer down a 6-foot hole, only to reappear in the fall. This has been going on for at least 12,000 years due to volcanic activity and summer dryness. The summer heat upsets the delicate balance of inflow and outflow, causing the lake and its trout to drain down the hole, where it joins up with groundwater flowing 11 miles into Clear Lake and eventually into the McKenzie River.

In the fall, wet weather tips the balance in favor of filling and Lost Lake returns, along with nearby Fish Lake, which also disappears annually. In these cases, underground caverns are the most likely reservoirs for the vanishing lakes. Everything is fine until some fool tries to plug the hole with car parts or trash, causing local flooding.

There’s a good chance Lake Peschёra will return just like Lost Lake. Will it get on an annual disappearance schedule? That depends on climate change and broken-down Russian cars.

A Liquid Ocean on Pluto is Still a Possibility