Stories in Stone: Legends of Giants in the Southeastern United States

I have always been fascinated with petroglyphs — carvings of pictures into stone, of which there are many old instances scattered around the United States. In his book Lost!, former National Park Ranger and rescue searcher Dwight McCarter describes finding petroglyphs that dated back to the early nineteenth century, in which a pair of travelers had marked their subsequent visits passing a particular stony outcropping near the present-day Great Smoky Mountains National Park.

Similar to these, I once managed to stumble onto some peculiar petroglyphs on a cliffside, high at the top of a mountain near the Hickory Nut Gorge in Western North Carolina. Much like the petroglyphs McCarter described in his book, it would seem these had been intended to commemorate someone’s discovery of the area, which, admittedly, is to this day still a fine natural campsite overlooking the beautiful valley of Fairview, North Carolina, for miles below.

There are older petroglyphs to be found in this region, of course. The Judaculla Old Fields in nearby Jackson County are, as anthropologist James Mooney once described, “about the head of [the] Tuckasegee river, in Jackson, North Carolina.” This is near an old little mountain community — since it’s far too small to be called a town — known as Webster, near the college town of Cullowhee. There, a "large rock bearing numerous petroglyphs, rings, cup-shaped depressions, [and] fish-bone patterns”, as Mooney described it, still exists to this day. It is known as Judaculla Rock (pictured at the top of this page), and the petroglyphs that cover it’s weathered old face tell a most unique story.

The name of the site is borrowed somewhat from an earlier Cherokee Indian word, Tsul ‘kalu, which had been the name given to the legendary Cherokee god of the hunt (though how, exactly, “Judaculla” had been extrapolated from this is ab it of a mystery in itself). Tsul ‘kalu’s story, which holds that one peculiar marking on the rock is actually an imprint of the ancient warrior's six-fingered hand, is one of two legends in the Cherokee tradition that involve giants; otherwise, beings of large stature are rather pointedly absent from their mythos. The other instance was described by the aforementioned anthropologist, James Mooney, in his book, Myths Of The Cherokee, which was told to the anthropologist by an elderly man named James Wafford. It was Wafford's grandmother who shared an odd tale with him sometime in the middle-to-late nineteenth century, which told of giants that came to visit the Cherokee on one occasion:

James Wafford, of the western Cherokee, who was born in Georgia in 1806, says that his grandmother, who must have been born about the middle of the last century, told him that she had beard from the old people that long before her time a party of giants had come once to visit the Cherokee. They were nearly twice as tall as common men, and had their eyes set slanting in their heads, so that the Cherokee called them Tsunil'kälû', "The Slant-eyed people," because they looked like the giant hunter Tsul'kälû'. They said that these giants lived very far away in the direction in which the sun goes down. The Cherokee received them as friends, and they stayed some time, and then returned to their home in the west. The story may be a distorted historical tradition.

The story related to Mooney by Wafford has always fascinated me, and as Mooney suggested, it is likely apocryphal, though perhaps based on a partial memory of some actual event or cultural tradition. The thing about this story that has continued to captivate the imaginative among us, however, involves the reports of discovery of large skeletons in the Americas -- some of these found near the Western North Carolina and Eastern Tennessee region -- which coincides with the Cherokee legends about Tsul'kälû' and the so-called "giants from the west."

Does this offer further proof of the existence of a lost race of giants? Not really... and even if there were anything akin to unusually large beings stomping about parts of North America in ancient times, that certainly doesn't mean that they were anything other than human. Furthermore, the largest skeletons on record (apart from unsubstantiated tales that detail massive skeletal finds) are never in excess of nine feet in height, which is only one inch taller than the very tallest man on record, Robert Wadlow, who still holds the Guinness record for tallest human ever known to exist. 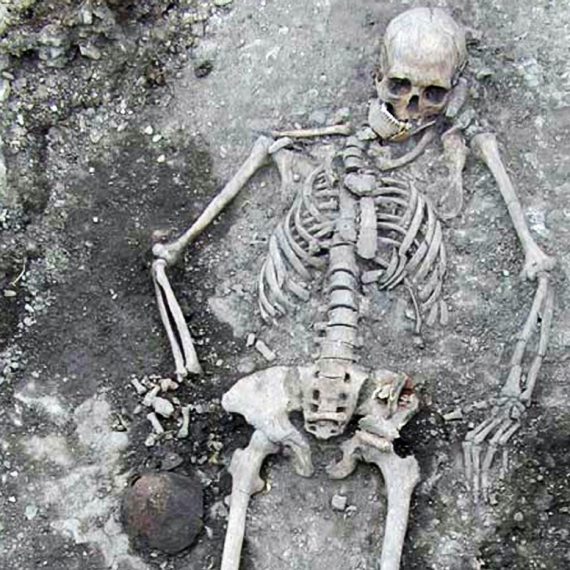 As a funny side note, when I appeared on Coast to Coast AM some time ago and pointed this out live on air, many listeners accused me of being "part of the conspiracy" to cover up the true history of a race of "giants" in America's prehistoric past. In equal measure, I was accused by skeptics of "downgrading" my own apparent views on these "giants". If indeed a credible case can be made for such large skeletons at all, I have always thought they would be of human origin... not any "lost race" of giants. The moral of this story is that both sides of the proverbial argument tend to get caught up in the debate over what they believe to be the irrefutable facts; and often, when they see someone who doesn't fall in lock-step with them and their own dogmatic predispositions toward "belief" or "skepticism", they interpret all other data as being in opposition to their own views; but as usual, I digress.

Some time ago, a molecular biologist contacted me with interest in this subject and, after asking that I keep his name confidential, expressed his own ideas about the notion of how instances of large human remains might have come to exist over the centuries:

Let's assume [giant skeletons] are real. What would be the simplest explanation?

They are humans. With that, I mean genetically identical with a known variety of humans present at that time.So how do you get humans of [in excess of 10 feet] in size?

Just think about it, we started to domesticate (breed) dogs from wolves some 35,000 years ago, and today we have Dachshunds and Poodles. Those are genetically stable varieties of Wolves. That means if you breed a Poodle with another Poodle you'll get more Poodles, but you can still breed a Poodle with a Dachshund and get... something funny.

So, imagine you are an explorer who never saw a dog in his live. During your travels you encounter a Pitbull, a Chihuahua and a Rhodesian Ridgeback. Would you assume those are interbreedable variations of the same species, basically identical on a genetic level?

Look at dairy cattle; cows were formed into optimized milk producing machines in even less time.

It is easy to set the scene for a process of such selected breeding in humans. I will give you an example: We are talking pre-biblical times, so culture is pretty much isolated and therefore mostly stable for long periods of time due to a lack of impulses.

Let's say there is a proto-religion based on a belief that large people are favored by the gods, and the larger, the better. Let's say their largest individuals will breed with the largest individuals from the neighboring tribe due to a religious commandment.  Of course those offspring won't be as large or larger than their parents by default, but over time you'll increase the probability of larger offsprings by this kind of breeding. Do this over many generations, and you will get individuals of extraordinary size. Do it even longer, and you will get a stable population of large-sized humans (although I doubt this part, as it would most likely take hundreds of generations, translating into thousands of years to achieve that... on the other hand, there are some 20,000 years of human history in North America we don't know a lot about).

Now you have a caste of large humans who are assumed to be blessed, or sacred. How easy would it be to get from "blessed by the gods" to "children of the gods", over a couple of hundred years? There you go... Nephilim.

At some point they fall out of favor for one reason or the other. How long would it take for them to disappear, either by elimination or by dissolving back into the gene pool? A couple of generations later they would be stuff of legends.

It's an interesting narrative my biologist friend suggests, since it presumes a non "woo-woo" origin for large human specimens... and one that is at least plausible, unlike notions that a "lost race" somehow managed to miraculously exist, and somehow remain absent from the fossil record. Then again, we do have instances of gigantism that seemed to appear in other areas of our evolutionary history, which include Paranthropus remains in parts of Africa that easily exceeded a normal height of 7 feet for short periods (geologically speaking, of course). There is also the relic hominid Gigantopithecus which some attribute to being a likely ancestor of the modern Sasquatch, due to its massive size, as well as certain ambiguities presented by a lack of knowledge about its locomotion (knuckle walker? Biped? Who knows... although in the opinion of this blogger, it was likely a knuckle-walker, based on its massive size).

Here at the resolution, the story that began with a discussion about ancient petroglyphs seems to have taken us out on a broad story arch, and though we are no longer speaking of stone carvings, evidence in the fossil record is still very much of the "stony" kind. Perhaps with time, the mysteries of the ancient past -- whether by stone, bone, or some other physical means of scientific study -- will reveal more to us about the kinds of stories we hear of giants; and yes, perhaps there is still some chance that a decidedly non "woo-woo" explanation for them will arise from the great ashes of prehistory.

John Green, Veteran Sasquatch Researcher and Author, Has Passed Away