An unusual object spotted  in the skies over Manchester, England, was filmed recently (well, fairly recently, as we'll see in a moment), in footage that depicts a flying object described by some as resembling a "torpedo."

The object, which can be seen in the video below, appears to change color (possibly due to the way light is reflected off of it), as it passes through the sky over the area where it was filmed:

However, there are some issues with the film, or more importantly, the way it is being reported on various news sites. Despite being referred to variously by the Express as "new video footage of a strange cigar-shaped UFO" and "the latest clip", the footage actually appears to date all the way back to December of last year, according to the YouTube account that uploaded it. Furthermore, no other data appears to have been added along with the video at that time, further removing the film -- whatever it shows -- from the realm of objectivity.

East Coast Radio in New Zealand, referring to the video as "the world's scariest UFO sighting ever", noted that the video was accompanied by the following caption, "Knowing how high it appeared in the sky, I’m guessing its size was massive." However, the article only mentions that the film was shared via social media, followed by a link to the YouTube video in question which, as stated earlier, does not appear to contain the caption cited here. So what is the object?

The Express further reported that according to one researcher, the object, while resembling a strange "cigar shaped UFO", was likely to have been a solar balloon of some variety. A number of these balloons are commercially available for purchase, such as the Solar Airship, which is described by online retailer Enviro Gadget as being "a cross between a hot air balloon and a kite. The 8 m long black plastic tube fills with air which heats up, sending it into the air. A 50 M line is attached to tether the airship like a kite." 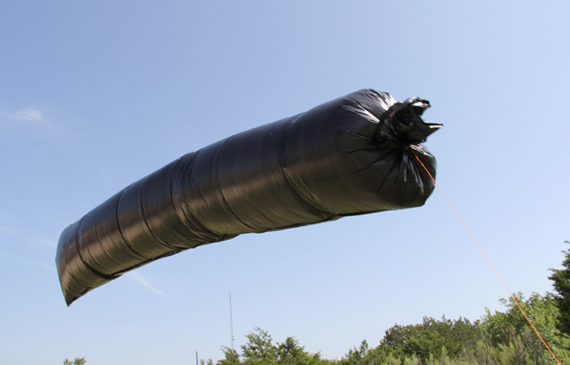 Elsewhere, similar models are marketed as "UFO Airships" like this one. With little doubt, the object in the "new" (read: several-months-old) video is merely a solar balloon... which brings us to the $64 question: why is any of this even important?

On the subject of balloons and torpedo or cigar-shaped UFOs, there is actually quite a bit of interesting commentary that can be provided, since it addresses many of the misconceptions about what a UFO is generally alleged to look like, as well as how individuals may perceive (or misperceive) them. In 2014, another variety of balloon managed to spark a small UFO flap over the southeastern United States, when one of Google’s early prototypes for using high-altitude balloons to deliver wifi internet was seen high in the sky by residents in Kentucky and Tennessee:

Turns out, the balloon responsible for the mass UFO sightings was not only a prototype, but one that wasn’t following the plans of its designers.

“This is a balloon that went rogue,” said Google X Rapid Evaluation team leader Rich DeVaul at Smithsonian magazine’s “The Future is Here” festival in Washington, D.C., on May 17. “No one outside Google X knows this,” DeVaul added.

Interestingly, the reports filed by the National UFO Reporting Center (NUFORC), rather than elaborating on the object and attributing "UFO" features to it, instead described the object very much like the balloon it turned out to be:

10:00 AM: Rotating cylinder climbing vertically in sky. Observed for more than one hour over the Piney Flats area.

I found this to be significant when I wrote about it two years ago, since it seemed to show that people's descriptions of the object they observed remained rather grounded, contrary to the notion that an object, when misidentified as being an aircraft or "UFO" of some variety, will also be exaggerated with features like windows, lights, etc, by observers. This may not always be the case, after all.

And of course, while the Express reported that the object in the "new" video, featured earlier in this post, had been "long and narrow, rather than the disc-shape commonly associated with UFOs," there are in fact a number of reports from over the years that describe cigar shaped objects. In fact, despite the popular "disc" or "saucer" shape popularly attributed to UFOs after Kenneth Arnold's sighting in the summer of 1947, one year earlier Captain Jack Puckett of Strategic Air Command, while piloting a C-47 en route to MacDill Field, Tampa, Florida, nearly collided with a long, tubular "rocket" with illuminated portholes, which produced a plume of smoke behind it as it traveled.

Puckett's written statement on the incident read as follows:

"At approximately 6 p.m., while flying at 4000 feet northeast of Tampa, I observed what I thought to be a shooting star to the southeast over the Atlantic Ocean. My copilot, Lieutenant Henry F. Glass, and my engineer both observed this object at the same time. This object continued toward us on a collision course at our exact altitude. At about 1,000 yards it veered to cross our path. We observed it to be a long, cylindrical shape approximately twice the size of a B-29, with luminous portholes."

Also in the summer of 1946, reports of "ghost rockets" over Scandinavia entailed missile or torpedo-like objects. Hence, despite the popular "Flying Saucer" meme, many of the earliest UFO reports --if not the majority -- actually did involve torpedo or cigar-shaped objects which, at times, were very unlike our typical notions about what a UFO "should" look like.

It's important, from time to time, to break down these preconceptions, especially since this helps us in the broader study of UFOs to understand what, precisely, we are looking at in our skies. And, as the earlier case illustrates, sometimes the UFOs that turn up in videos online, despite their weird appearance, do have quite plausible explanations, whether they be solar balloons sent aloft by hobbyists, or giant wifi hotspots sent skyward by Google!