The Mystery Mummy: Did an “Alien” Body Turn Up Near a Famous UFO Hotspot?

Among the many questions that arise within various areas of research involving the unexplained, one of the most asked -- and often criticized -- involves the need for physical evidence. If we are to prove, for instance, that a creature like Bigfoot exists, how can this be done without the requisite physical specimen: an actual body which, dead or alive, could settle the debate once and for all?

During the 1950s and 60s, as reports of the famous Brown Mountain Lights of Western North Carolina began to make their way into newspapers and men's adventure magazines, other curious tales began to emerge from the region they were often seen. Not only had people in the area claimed to see strange illuminations near the vicinity of Brown Mountain, but many individuals were starting to share odd stories about their interactions with the lights. Some of these involved observers who claimed to have been "chased" by glowing orbs, while others claimed to have discerned clues about their "extraterrestrial" origin.

One of these claiming to have "proof" of alien involvement with the lights had been Ralph Lael, a local entrepreneur who operated a rock and gem shop off Highway 181 near Morganton, NC. His story was bizarre indeed: Lael claimed he had been kidnapped by beautiful female aliens from the planet "Peewam", which led him to underground caverns beneath the region. There, they explained that the lights were a byproduct, essentially, of their extraterrestrial power sources located below ground. Lael published an account of his rather whimsical alien abduction tale in the form of an inexpensive little pamphlet, which was offered for sale at his rock shop which, in keeping with the story's interplanetary theme, was christened "The Outer Space Rock Shop."

However, there was more than just Lael's story that made the shop a curious attraction for those passing through on their way to see the famous "ghost lights": Lael claimed to possess a full-fledged alien mummy, which he kept on display in the back of his shop. Sometime in the late 1970s, researcher Timothy Green Beckley had been one of the many UFO hunters who visited the area, and he managed to take a photo of the "alien" on one of his visits: 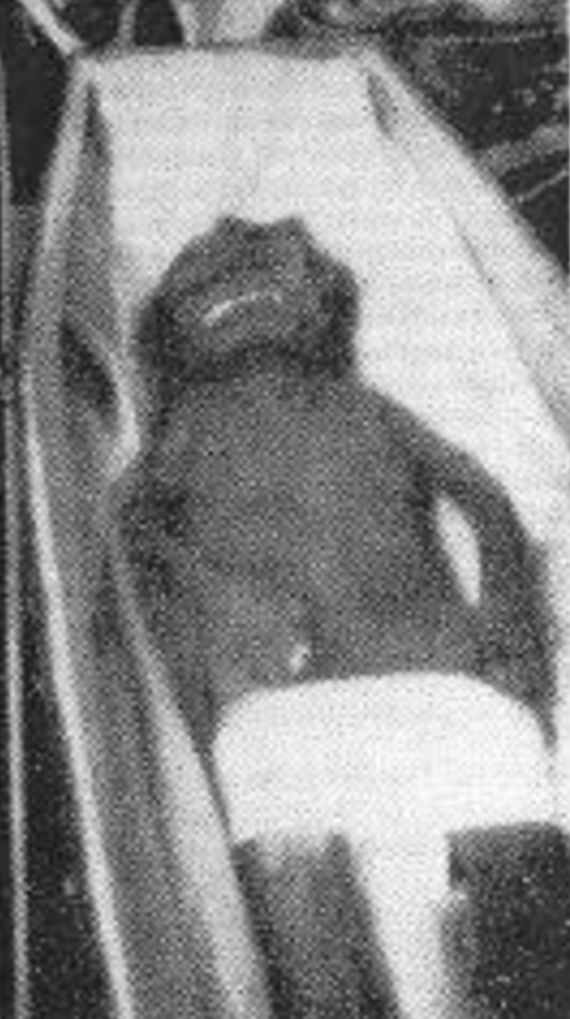 The image Beckley took later appeared in the book Underground Alien Bases, authored by an unnamed individual under a mysterious pseudonym known as "Commander X" (I've asked Beckley about Commander X, and while he has never revealed the individual's name, he has discussed publicly during one of my podcasts that he (Beckley himself) is not the pseudonymous author, but that he does know the individual personally).

While the photo of Ralph Lael's "alien mummy" here is perhaps the only known photo of the body in question, on one occasion years ago I was able to examine a much better image of the body, which had been kept in a private collection. These black and white photos were much better resolution, and clearly displayed more details about the "mummy", which looked very much like a papier-maché model of some variety. I subsequently blogged about this at my site, which resulted in an email from the folks at the Sideshow World website. They provided me with links to a number of classic catalogues, from which I was able to positively ID the "mummy" as being one of artist Homer M. Tate's creations.

Tate's style of "folk art" was rather interesting, if not a bit macabre. As the story goes, he would actually head out into the desert and gather little bits of bone, animal teeth, fur, and other things, and incorporate them into what, at times, became rather lifelike "mummies", which he would sell to collectors and owners of roadside attractions and museums. Some of Tate's mummies were based on Egyptian themes, while others were vaguely Tarzan-esque, clad in loincloths (much as Ralph's alien mummy appears to wear in the photo above). Still others were described as "little men from Mars", which seemed to further borrow from the Edgar Rice Burroughs motif that Tate incorporated into his fantasy folk art.

Around that same time, I was able to share a correspondence with Linda Wolff, the great-niece of Ralph Lael, who my friend and fellow researcher Vance Pollock managed to track down. Wolff had been a writer for regional newspapers for a number of years, and fondly recalled going and observing the "mummy" a few times when she was younger. During our correspondence, Linda remarked that on one occasion, she had stood and looked through the glass casing, and stared right at the face of the mummy. "I could see that the mouth even had little teeth in it!", she told me excitedly. Her description seemed a perfect match for the kinds of papier-mâché mummies Tate would augment with teeth, animal bones, and other odd organic elements.

Altogether, it is very likely in my opinion that Lael's "alien mummy" was, in fact, just a bit of Americana hailing back to the sideshow era, which he managed to work into his own bizarre little mythos about his experiences at Brown Mountain. As a final note, I should point out that Lael never directly implied that the body had been extraterrestrial, but instead claimed that the creature had been, to borrow Lael's own words, a "little mountain man." This explanation may very well have been derived from folklore about the "Little People," which were spirit folk that figured heavily into regional Cherokee legends.

As for what happened to Lael's mummy, that's anybody's guess... but I would argue that his wild stories about mummies, beautiful aliens, and their bases below Brown Mountain probably influenced a lot of the speculation today about underground bases, which some believe to exist beneath the nearby Linville Gorge Wilderness (this concept was one of the focal points of the Brown Mountain discussion featured in the aforementioned book,Underground Alien Bases by the mysterious "Commander X").

As such, it would seem that a lot of the more colorful folklore about the region has been influenced by the work of those like Ralph Lael, and others whose fascination with strange phenomenon and the burgeoning UFO culture of the 1960s prompted new legends that borrowed from existing Southern Appalachian folklore. Too bad there hadn't actually been an alien mummy though... that might have settled a lot of those questions about "physical evidence" that, even today, continue to haunt the hopeful paranormalists out there.

That's not to say there haven't been other Mummies in Space... at least as far as Whovians go: 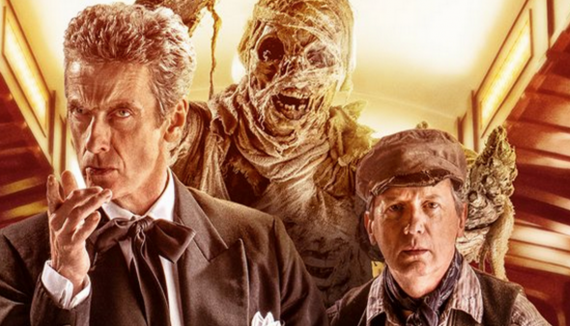