These Classic Cases Appear to Defy UFO “Trends” Over the Decades

One of the prevailing modern themes among UFO researchers today entails that UFOs have gradually changed in appearance over time. Beginning with amorphous “green fireballs” and “ghost rockets” in the 1940s, by the 1950s and 60s, these “UFOs”, as they were dubbed by head of the USAF Project Blue Book Edward Ruppelt, began to often appear as saucer or disc-shaped. Later, objects resembling eggs, cigars, and a host of other shapes were continually reported up until the later 1980s, when large, silent triangle-shaped aircraft began to become most prevalent amidst popular reports of mystery aircraft in our skies.

A skeptical friend of mine recently questioned me about this apparent trend, noting that, “it’s amazing to me that no one seems to have ever pointed this out or discussed it.” This, of course, was a misperception on his part — although quite an honest one, I believe — as I am often confronted with similar “why has nobody ever…” by my more skeptical friends (and in truth, rather than these being cases of some trend or question never having been addressed by serious UFO researchers, instead they tend to be evidential that many skeptics haven’t, for better or for worse, take time to familiarize themselves with literature about the UFO subject).

Perhaps the idea of “trends” in relation to changes among UFO descriptions over the years isn’t entirely without merit. It does seem that the alleged “silent triangle” UFOs began to appear with greater frequency during the 1980s and early 90s. In equal measure, fewer of the classic “Daylight Discs”, to borrow J. Allen Hynek’s terminology, seem to be seen in the modern era. So it does seem that an argument could be made that descriptions actually have changed some over time.

However, if we look more closely at the reports that have been collected over the decades, and truly attempt to dig deeply enough, at least, that we find credible ones in their midst, we find that many of the so-called “trending” UFOs have actually appeared numerous times over the course of the history of UFOlogy, and are not restricted to specific periods. 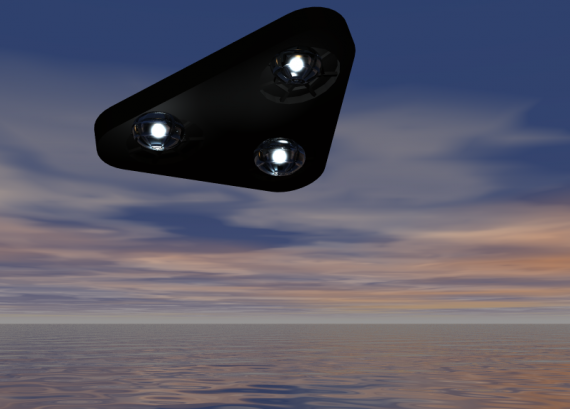 Take, for instance, the triangular UFO craft, the earliest appearances of which are largely attributed to the 80s and 90s. Looking further back, we actually find a number of credible witness reports that seem to suggest otherwise. In his 1965 book Anatomy of a Phenomenon, Jacques Vallee shared the following report that occurred in Poland in 1959:

“In March of 1959, on the coast of Poland near Kolobrzeg, Polish soldiers saw the sea suddenly become agitated. A triangular object, each side measuring about four meters, came out of the water and started to fly in circles over the barracks, then sped away and vanished.”

In 1996, my fellow MU blogger Nick Redfern also managed to find a report that occurred six years later in 1965, which had been reported to the MoD at the time it occurred.

“While digging through a whole host of formerly classified files on UFOs at the National Archives at Kew, England in 1996, I came across a one-page report dated 28 March 1965 that, I confess, I almost overlooked. On closer inspection, however, I realized that it was potentially one of the most important UFO-related documents that I had ever come across. According to the MoD paperwork, on the night in question a witness saw at approximately 9.30 p.m. over moor-land near Richmond, North Yorkshire, England: ‘Nine or ten objects – in close triangular formation each about 100ft long – orange illumination below – each triangular in shape with rounded corners, making low humming noise.’ ”

Redfern managed to track down the original witness to this 1965 episode, whose name was listed on the report. The man recalled the encounter with amazement once Nick reached out to him, describing that his car’s motor began to handle roughly immediately prior to the appearance of a large triangle, approximately 100 feet across and moving slowly toward him. The object then took off with amazing speed, angling upward and rising altitude to join a fleet of similar aircraft, which left the area together. For some time after the incident, the witness received numerous calls from an unidentified individual that claimed to work with a division of the government, who inquired about whether he had observed the craft again, or if anyone had interviewed him about it.

Researcher David Marler, author of the book Triangle UFOs: An Estimate of the Situation, also notes early reports of triangle shaped UFOs. Marler and I met in April, 2016, at a conference in Eureka Springs, Arkansas, where I asked him if he had been aware of a report of a triangle-shaped “cloud” with a red light in the center, first related (as far as fringe literature goes, at very least) in Charles Fort’s classic work, The Book of the Damned. Not only had Marler indeed seen this and included it in his own book on the subject, but he had managed to glean a number of similar reports of triangle-shaped objects aircraft that well predated the more popular “modern” reports of silent triangle UFOs.

With little doubt, the same analysis could be applied to other descriptions or classification groups of UFOs, but using the preceding as a general example, the presumption that the UFO phenomenon appears to follow distinct trends over time may not be completely true. Or, at very least, as with all sets of rules, one will generally find exceptions if they look closely enough.

Say Hello to Goliath, The Newest ‘Monster’ of Myakka, Florida