A Procession of the Damned: Charles Fort, Defender of “The Excluded”

Charles Hoy Fort is widely considered by many to be the "inventor" of the modern study of the unexplained. In 1919, the first edition of his inaugural volume, The Book of the Damned, presented to its readers a cavalcade of weirdness, authored in an eccentric style that could almost qualify as its own unique variety of shorthand. This was soon matched with a handful of similar volumes that Fort, a frustrated, failed fiction writer, continued to produce, issued as continuous "jabs" aimed at the scientific establishment.

"Forteana", as it is known today (despite the relative obscurity of the term), entails a broad range of oddities that follow Fort's general methodology, which may range from the study of psychic phenomena, to mystery beasts and, yes, even UFOs. Some of its more logical proponents, however, have preferred the term "anomalistics" rather than Forteana, since it implies a scientific approach to the study of world mysteries (which contrasts somewhat with Fort's aims and attitudes).

Perhaps there is nothing else that quite became the hallmark of Fort's brand of staple oddities more than the anomalous rain of animals. In his collected works, the author gave the details of numerous such instances, having occurred in all parts of the world. However, the phenomenon had been nothing new to Fort's particular era; reports of fish, frogs, and other animals (though typically of the aquatic variety) have been recorded all the way back to the 1st century AD, with notable accounts given by such scholars of antiquity as Pliny the Elder. 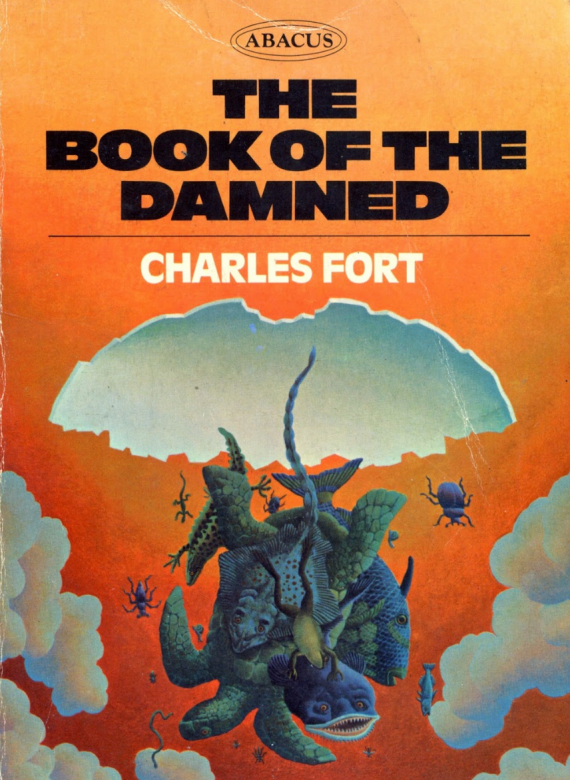 Fort went a bit further with his interest in such "anomalous rains" though, including not merely living creatures, but also mysterious substances, the likes of which he described in The Book of the Damned as follows:

Black rains and black snows—rains as black as a deluge of ink—jet-black snowflakes.

Such a rain as that which fell in Ireland, May 14, 1849, described in the Annals of Scientific Discovery, 1850, and the Annual Register, 1849. It fell upon a district of 400 square miles, and was the color of ink, and of a fetid odor and very disagreeable taste.

The orthodox explanation of this rain occurs in Nature, March 2, 1908—cloud of soot that had come from South Wales, crossing the Irish Channel and all of Ireland.

Those presently unfamiliar with Fort's style of writing may now see the peculiar workings aforementioned, which often included Fort's own unique addition of quick footnotes and citations.

He further describes "substances" which resembled meat of some variety -- a phenomenon similar to that referred to as "blood rains" throughout history -- in which chunks of beef purportedly fell over Kentucky in 1876:

"Upon March 3, 1876, at Olympian Springs, Bath County, Kentucky, flakes of a substance that looked like beef fell from the sky—"from a clear sky." We'd like to emphasize that it was said that nothing but this falling substance was visible in the sky. It fell in flakes of various sizes; some two inches square, one, three or four inches square. The flake-formation is interesting: later we shall think of it as signifying pressure—somewhere. It was a thick shower, on the ground, on trees, on fences, but it was narrowly localized: or upon a strip of land about 100 yards long and about 50 yards wide. For the first account, see the Scientific American, 34-197, and the New York Times, March 10, 1876."

Of this incident, Fort referred to skeptical commentators on the matter as "exclusionists", a unique terminology which, apparently, failed to gain traction in the ensuing decades. "It seems to me that the exclusionists are still more emphatically conservators," Fort wrote. "It is not so much that they are inimical to all data of externally derived substances that fall upon this earth, as that they are inimical to all data discordant with a system that does not include such phenomena.... Or the spirit or hope or ambition of the cosmos, which we call attempted positivism: not to find out the new; not to add to what is called knowledge, but to systematize."

Of course, there are certainly theories that might propose a plausible origin of such "anomalous rains", which include tornadic waterspouts, a perennial favorite among science-minded anomalists. To illustrate this is not to say that Fort had hoped to outline or showcase phenomenon which could never be explained, so much as to show that certain observable phenomena appeared to have been neglected; hence his "procession of the damned", as referenced in the opening lines of The Book of the Damned:

"A procession of the damned.

By the damned, I mean the excluded.

We shall have a procession of data that Science has excluded."

-Charles Fort, The Book of the Damned.

Although it has often been suggested that Fort had hoped to "smack the face" of the stuffy scientific establishment, his broader goals had indeed been to shed light on the existing mysteries of our universe, and to showcase, for a change, those things that had otherwise been "damned" to the darkened walk of the excluded. Here may be monsters, oddities, and things no sane God would allow... or here, quite the contrary, may instead be creatures and natural phenomenon that shall one day very much be accounted for, though perhaps only through the attention they have occasionally been afforded through Fort's unique brand of anomalistics.

"The power that has said to all these things that they are damned, is Dogmatic Science," Fort wrote, in a passage which lends itself beautifully to the resolution of our brief commentary here.

So they have, it seems; and with any luck, perhaps they'll continue.

These Atomically-Thin 2D Circuits Were Grown, Not Built