What is it with California and mysterious booms, loud noises and explosions? After residents of Alhambra recently reminded the rest of the country that they’ve been hearing unexplained explosions at a rate of 20 per month since February, their fellow Californians in Sonora topped them by revealing that they’ve been experiencing strange loud noises daily between 11 am and 2 pm for at least a year. Is there a connection? Is there an explanation? Is it time to move to Oregon?

Sonora is over 300 miles north of Alhambra so the booms may not be coming from the same source. However, proximity to a number of unusual places has spawned some interesting theories about their possible causes.

Like many California cities, Sonora dates back to the California Gold Rush and is still dotted with abandoned mines. Are some really-late-to-the-game miners blasting for gold? That seems unlikely since the sound appears to originate further away and evidence of mining explosions would be found by locals and other would-be gold fanatics.

Those looking for a conspiratorial cause for the booms point to Sonora’s proximity to Area 51. However, “proximity” usually means a distance less than 350 miles, the distance to Area 51 in Nevada. That doesn’t necessarily eliminate UFOs as a cause. Sonora is one corner of California’s Triangle Alley, a three-sided area known for UFO sightings, including one in April 2016 and another in January 2015. However, those don’t explain the other hundreds of regular daily booms over the past year.

Sonora teacher and geologist Glen White recently proposed a new proximity theory with evidence to back it up. He believes the mysterious booms are coming from non-mysterious munitions disposals being conducted daily at the Hawthorne Army Depot in Hawthorne, Nevada, about 170 miles from Sonora. White traveled to Hawthorne and videotaped the detonations.

When confronted with the video, Ken Thomas, a contracting officer for the depot, admitted that munitions were regularly destroyed there but pointed out that the 170-mile distance from Sonora included a noise-blocking mountain. Like a true government employee, he also noted that his own office is only 27 miles from the detonation site and he “barely” hears them. 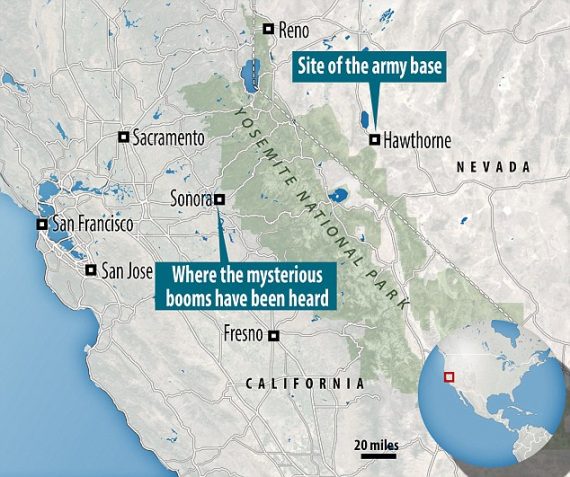 White is trying to enlist the residents of Placerville, California – 75 miles north of Sonora – to back him up since he claims they also hear the booms. He says he can’t explain the physics of sound travel (what kind of teacher is he?) but is sticking to his theory.

Meanwhile, the booms continue to be heard in Sonora like clockwork. Is there another explanation? How about an explanation for why Glen White is the only one of 5,000 Sonora residents investigating them?

Kepler Uncovers Trove of Exoplanets, Four May Have Life