[It's an] unprecedented hazard in one of the most densely populated regions of the world.

The worst place for a massive earthquake to occur is in a densely populated area. The deadliest recent earthquakes, caused by tectonic plates grinding against each other, have occurred under the oceans, causing tsunamis but sparing populated areas from the additional destruction an earthquake can bring. A new report in the journal Nature Geoscience warns that a new tectonic plate-grinding subduction zone has been discovered on shore under Bangladesh, threatening many of its 171 million densely-packed residents.

According to a press release by lead author Michael Steckler, a geophysicist at Columbia University's Lamont-Doherty Earth Observatory, the newly identified subduction zone is an extension of the tectonic plate fight between the Indo-Australian and Eurasian plates that has been occurring under Asia for millions of years, causing everything from the formation of the Himalayas to the 2015 earthquake in Nepal. New models show that the plates have been increasingly vying for position under Bangladesh for at least 400 years and Steckler says the possibility of a massive quake is increasing. 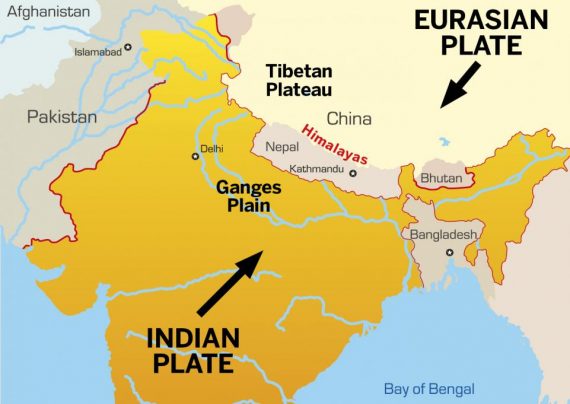 The models used data collected since 2003 by GPS instruments tracking minute ground movements which shows that eastern Bangladesh is pushing into western Myanmar at a rate of 46 mm (1.8 inches) per year. This movement is occurring in a zone measuring 250 km by 250 km (over 24,000 square miles) just a few miles below the surface that includes Bangladesh's capital city of Dhaka with a population over 15 million.

Like many other things in that country, Bangladesh is ill-prepared for earthquake disaster, let alone one of this magnitude, says Syed Humayun Akhter, a geologist at Dhaka University in Bangladesh.

Bangladesh is overpopulated everywhere. All the natural gas fields, heavy industries and electric power plants are located close to potential earthquakes, and they are likely to be destroyed. In Dhaka, the catastrophic picture will be beyond our imagination, and could even lead to abandonment of the city.

Steckler says the model shows potential horizontal movement caused by an earthquake anywhere from 5.5 meters (18 feet) to 30 meters (98 feet) in densely populated areas with few building codes and substandard construction. It appears that the only preparation for this event would be improved warning systems, evacuation plans and emergency medical and disaster setups.

Roger Bilham, a geophysicist at the University of Colorado, describes the dire situation best:

The Indian subcontinent is effectively being pushed into a tight corner.