China has just put the finishing touches on the world's largest radio telescope, positioning themselves to take the lead in the search for alien life as well as more general exploration of the universe. The last of the 4,450 triangular reflectors was installed on the 1650-foot dish--roughly the size of three football fields--this past weekend, and it will become fully operational in the next two-to-three-years.

The $180 million telescope--named FAST, for Five-hundred-meter Aperture Spherical Telescope--is located in the southwestern province of Guizhou, and has been under construction since 2011. 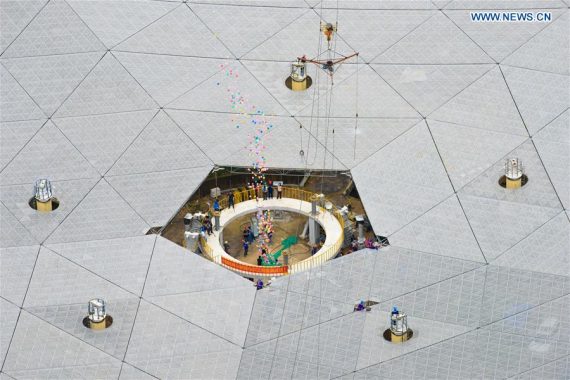 As the world's largest single-aperture telescope located at an extremely radio-quiet site, its scientific impact on astronomy will be extraordinary, and it will certainly revolutionize other areas of the natural sciences.

Located in a remote valley more than 1,200 miles from Beijing, the mammoth telescope is certainly in a radio-quiet spot. But it wasn't always completely quiet; the site itself was once home to a village of 65 people, all of whom have been relocated. State media explained the residents have moved to better living conditions, and jealous nearby villagers have told them to "thank the aliens." Take that how you will.

An additional 9,110 people living within a three-mile radius of the scope will be relocated by the end of September, each receiving $1,837 in compensation. Whether these relocations are to protect the soon-to-be-former residents, or the integrity of FAST's readings, is unclear. 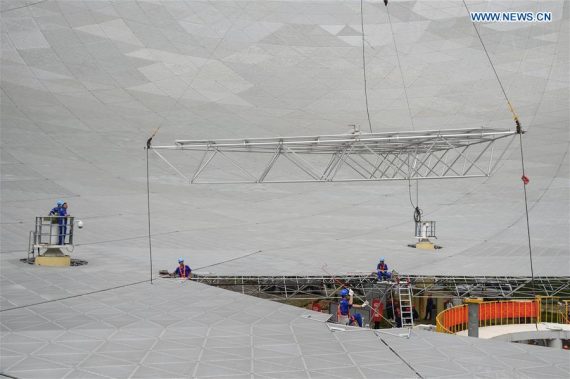 But disregard for nearby residents aside, the Chinese believe that the potential for discoveries using the telescope is huge. Peng Bo, director of the National Astronomical Observatories' (NAO) Radio Astronomy Technology Laboratory explained:

FAST's potential to discover an alien civilization will be 5 to 10 times that of current equipment, as it can see farther and darker planets.

Indeed, FAST's dish eclipses the current largest radio telescope, the 1000-foot Arecibo Observatory in Puerto Rico. And, according to Xinhua, FAST will be 10 times more sensitive than the steerable 100-meter telescope near Bonn, Germany.

In addition to conducting a search for extraterrestrial life, FAST will be able to better detect low-frequency gravity waves, and help us learn more about the early days of the universe.