Cybernauts Versus The Avengers

Nope, that's not the title of another terrible movie on the you-know-which channel. It's something entirely different. Last year I wrote an article here at Mysterious Universe on the possibility that at least some portions of Albert Bender's story of his early 1950s encounters with the Men in Black may have been inspired by an obscure, old British movie. Its title: The Man in Black. You can find the article here. Similarly, in 2013 Rich Reynolds penned an article on another movie which he felt may have had a bearing on Bender's experiences. Here's the link to Rich's article. There are actually more than a few such examples on record, most of them being fairly obscure.

The world of television may have inspired such things, too, albeit specifically post-Bender. Such as the 1960s-era UFO-themed TV show The Invaders. Or, could we be looking at something even more controversial? Namely, the idea that fiction and imagination can have a direct - but not understood - effect and influence on what passes for reality. Some might be inclined to suggest that the so-called "Slenderman" phenomenon is an example of the latter. But, right now, it's back to that aforementioned world of television. 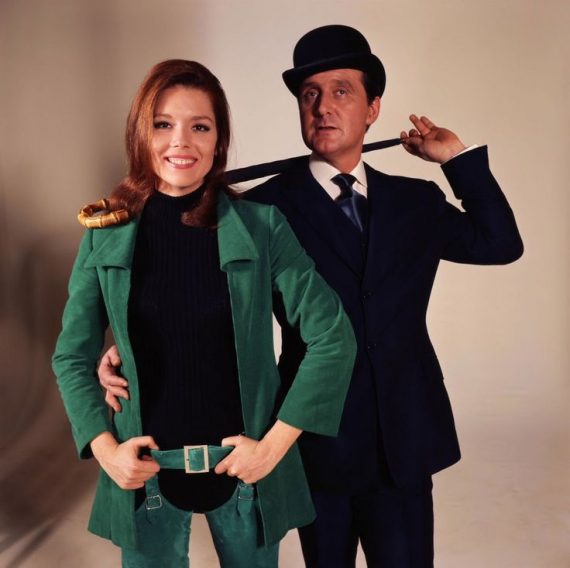 One of the most popular shows on British television in the 1960s was The Avengers. It was a tongue-firmly-in-cheek production which starred Patrick Macnee as John Steed, a booze-saturated, gentlemanly "secret agent." Or, to give him his full title: Major The Honorable John Wickham Gascoyne Beresford Steed. Although Steed had a variety of sidekicks, there's no doubt that the most popular of all was Emma Peel, who was played by Diana Rigg, and who appeared in no less than 51 episodes of the overall series. I can't say I remember it at the time (I was the grand old age of eleven months when Mrs. Peel put in her first appearance). But, I have watched it since.

A particularly intriguing episode (at least, from the perspective of the Men in Black issue) is that which is titled The Cybernauts, and which was Diana Rigg's third appearance. Her first two being The Town of No Return and The Gravediggers. The Cybernauts of the title are ruthless, humanoid, killing-machines of a robotic nature. They're quite familiar too: they dress in black suits, they wear black fedoras, and they are seen in black turtle-neck tops - all of which are often reported in MIB encounters. On top of that, and also like the MIB, their mannequin-like faces are pale (silver, in their case), and they completely lack any and all emotion, expect for the desire to kill. Or, rather, they are programmed to kill.

There's no doubt that the Cybernauts are the Men in Black in everything but name (the murderous angle aside). You can find a summary of the episode here. There's something else, too. Without giving away much of the plot, I will tell you that a portion of the episode is focused upon a mysterious "gadget pen." In fact, the pen is an integral part of the story. It so transpires that the MIB have longstanding ties to pens, as bizarre as such a nutty thing undeniably sounds.

It so happens that both the Women in Black and the Men in Black have a fascination for pens. One case of three I know of will suffice. It's the most famous example, too. Mary Hyre was a woman who played an integral role in the series of 1960s-era events that led John Keel to write The Mothman Prophecies. In January 1967, Hyre was visited by a creepy, bowl-haired MIB of around 5-feet in height and who had oddly hypnotic eyes. Throughout the encounter, the black-clad "man" kept staring at Hyre's ballpoint pen. To the point where Hyre told him he could keep it. He took it, laughed loud in a strange fashion, and vanished as mysteriously as he had first arrived.

On September 30, 1967, the black-clad robots of The Avengers were back in an episode titled (what else?) Return of the Cybernauts. Once again, the black outfit, the black hat, and the blank expression were all in evidence. September 30 (in 1915) was the birth-date of the aforementioned Mary Hyre. And 1967 was the year in which the collapse of the Silver Bridge - in Point Pleasant, West Virginia - occurred, and which Keel chronicled in The Mothman Prophecies.

Of course, many might say that all of this is nothing more than a case of finding similarities and making connections that have no bearing on anything but coincidence. They may well be right on target. It is, after all, extremely easy to make connections to just about anything if one tries hard enough. Sometimes, it's extremely easy to do so. On the other hand, there are a few more MIB-themed odd synchronicities that are linked to the worlds of television and movies. Periodically, I'll reveal more.