You can opt for the paleo diet, you can have as clean a living environment as you want, but the capacity for these diseases is ancient, and it's within us regardless of what you do to yourselves.

That warning comes from Edward Odes of the University of the Witwatersrand, co-author of a study published in the current South African Journal of Science about the discovery of a 1.7 million-year-old hominid bone containing evidence of cancer. Researchers studying a toe bone fragment found near Johannesburg noticed it was opaque instead of hollow. The outside of the bone had a cauliflower-like appearance similar to cancerous bones. 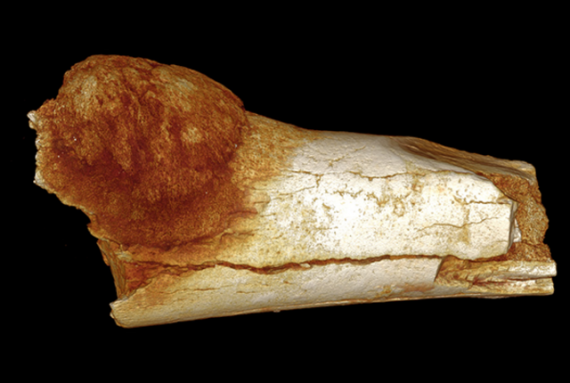 Using micro-focus X-ray computed tomography not available when the fossil was found decades ago, they created 2-D and 3-D images of the inside of the bone and saw that the abnormalities matched a rare modern cancer known as osteosarcoma. Osteosarcoma growths occur around the knee or in the long bones of the arms or legs, mostly in children and young adults.

How did this cancer affect the unidentified hominin species who had it in a foot bone? There were no other parts of the skeleton found so it’s difficult to determine, other than it would have made walking or running very painful. Paleoanthropologist Patrick S. Randolph-Quinney speculated on what eventually happened.

We don’t know whether it was the cancer that killed him or something else. It would have certainly affected his mobility, so it’s just as likely he was killed by a saber-toothed tiger.

The age of the cancerous fossil destroys some previous assumptions about the disease. Until now, the oldest evidence of cancer appeared in Egyptian mummies from around 3000 BCE, about the time Egyptian physician Imhotep wrote about a “bulging mass in the breast” that resisted treatment. Moreover, it points to the possibility that cancer – at least bone cancer - may be a genetic disease not just caused by environmental toxins and conditions.

That may be the case, but Odes warns against becoming complacent about other causes of cancer.

The mystery that is cancer continues to mystify.