The oldest Egyptian papyrus, dating back 4,500 years to the dynasty of Cheops, has been unveiled to the public for the first time and it reveals details about the lives of workers who built the Great Pyramid of Giza where Cheops was buried. Did they get breaks to zip out for coffee at Camelbuck’s?

The thirty papyruses (also spells 'papyri') were discovered in 2013 in caves in the port of Wadi el-Jarf, located 25 km (15 miles) south of the town of Zafarana on the Gulf of Suez, and are said by Antiquities Minister Khaled el-Anany to be the oldest ever discovered in Egypt. Six of them were placed on display this week at the Egyptian Museum in Cairo. According to Antiquities Ministry official Hussein Abdel-Bassir:

These show the administrative power and the central nature of the state at the time of Khufu.

He’s referring to King Khufu or Khnum-Khufu , the formal name of Cheops, the second pharaoh of the Fourth Dynasty who ruled during the 26th century BC. His biggest accomplishment was indeed a big one – Cheops commissioned the building of his eventual tomb, the Great Pyramid of Giza.

The papyruses give some insights into the daily lives of the workers transporting stones to the site and those building the pyramid. One describes three months worth of on-the-job activities by what appears to be a senior employee named Marr who was responsible for transporting quarried stones on the Nile and its canals.

Another papyrus is the diary of a government official named Merer the beloved (some things never change – a government official who calls himself ‘beloved’!). According to the diary, Merer had 40 employees who loved him as he managed them transporting limestone blocks from the quarries of Turah on the east bank of the Nile to the eventual site of the Pyramid of Khufu at Giza. The diary also contained data on tax revenue collected to pay the workers and what they actually were paid (no details on who pocketed the difference) and what they were fed (sheep). 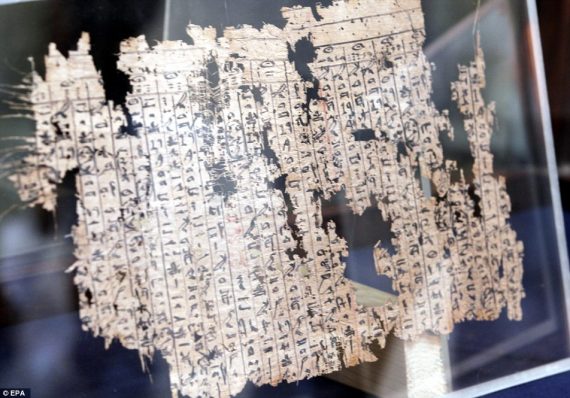 Antiquities Minister el-Anany says this exhibit is evidence that there’s still plenty to be discovered about ancient Egypt.

Including how a government official managing a group of people hauling massive rocks could be called ‘beloved'?