High-Speed Hummingbirds Have a Unique Skill to Avoid Crashes

Anyone who's ever seen a hummingbird in flight has probably noticed they're pretty extraordinary creatures; most conspicuous is the fact that by beating their wings at a rate of 50 times a second they can fly at up to 90 km/hr. Equally extraordinary is the hummingbird's capacity to move at these speeds and not meet a messy end in a collision with a nearby tree.

When we're driving on the highway, we employ the same tactic as bees to avoid collisions; a visual system known as pattern velocity. In pattern velocity we observe how fast an object is going past us. A tree that goes past us in one second is close, but a tree that takes us ten seconds to go past is further away. 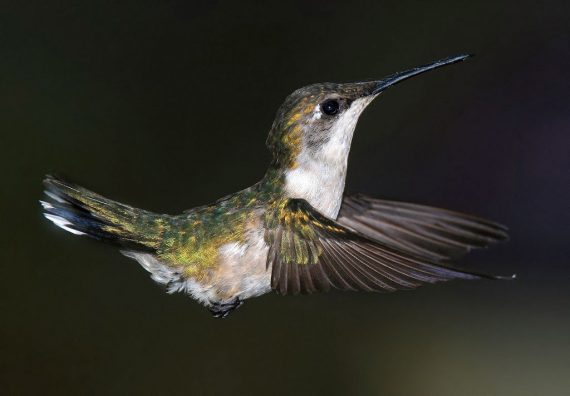 It's a simple, ingenious, and thoroughly imperfect system; humans and insects alike are pretty clumsy at speed, with a resulting tendency to crash into things. Hummingbirds, as we know, are much less accident-prone. So a team from the University of British Colombia set out to determine what the hummingbird does differently to the bee (or the human) that helps it better perceive its environment.

To do this, the researchers put some humming birds in a 5.5 meter-long tube and took advantage of the birds love to sugar water to keep them flying from one end of the tunnel to the other at high speed many times over.

And each time the birds shot their way down to the sugary treat, a different sequence of images was projected onto the wall of the tunnel. When they simulated situations that would prompt pattern velocity to kick in with insects, the hummingbirds didn't react. Instead, the birds responded when the objects around them changed in size--an object growing in size is getting closer, and an object shrinking in size is getting further away.

As Roslyn Dakin, a postdoctoral fellow in the UBC's department of zoology who led the study said in a statement:

When objects grow in size, it can indicate how much time there is until they collide even without knowing the actual size of the object. Perhaps this strategy allows birds to more precisely avoid collisions over the very wide range of flight speeds they use.

Which is particularly good for the hummingbird--given its small size and high speeds, a collision could be particularly catastrophic. But the research may also prove helpful in making drones more savvy at speed than humans.