Ionospheric Memory? The Mystery of the Long-Delayed Radio Echoes

During the late 1920s, a pair of Scandinavian researchers was engaged in a unique experiment. Carl Størmer, a geophysicist and his associate Balthasar van der Pol, a physicist with the Philips Research Labs, were sending messages to one another using short wave radio, with hopes of understanding an anomaly: certain signals the men were sending appeared to have been followed by odd “echoes”, some of which arrived as much as 15 seconds later than the primary messages the researchers had sent.

Størmer and van der Pol knew that these were long delays — too long, really, to be easily explained as merely being atmospheric or climatic anomalies. So what was their cause?

An earlier incident had actually been what prompted Størmer to seek answers to this mystery. Earlier in 1927, an amateur radio operator named Jørgen Hals had been had been noticing odd echoes from radio transmissions near his home in Oslo, Norway. Unable to determine the unusually long “echos” that followed certain transmissions, Hals wrote to Størmer, explaining his conundrum:

At the end of the summer of 1927 I repeatedly heard signals from the Dutch short-wave transmitting station PCJJ at Eindhoven. At the same time as I heard these I also heard echoes. I heard the usual echo which goes round the Earth with an interval of about 1/7 of a second as well as a weaker echo about three seconds after the principal echo had gone. When the principal signal was especially strong, I suppose the amplitude for the last echo three seconds later, lay between 1/10 and 1/20 of the principal signal in strength. From where this echo comes I cannot say for the present, I can only confirm that I really heard it.

Hence, Størmer enlisted the help of van der Pol, and set about attempting to solve the mystery of the long-delayed radio echoes, or LDEs as they are commonly called today. And yet, despite their best efforts, no conclusive solution to the problem was ever determined.

The problem persisted over the decades, and a number of possible solutions have been offered. Perhaps the strangest among these had surfaced in 1973, when the 27-year-old Scottish researcher and science writer Duncan Lunan graphically plotted the echo delay times of the signals, hoping to spot any hidden messages they might contain. This led to the publication of an article in Spaceflight (published by the British Interplanetary Society), which allegedly contained the following message about an alien space probe emanating from Arcturus:

Lunan presented his paper before the British Interplanetary Society in London, relying on the history of radio transmissions to bolster his case. However, Lunan's article was highly scrutinized, as one might imagine, and the author later retracted the majority of his theory, though maintaining a portion may have been correct in a later reassessment.

A number of other theories have been offered over the years, with hope of explaining the phenomenon. Reflection from distant plasma clouds emanating from the sun, as well as the more complex combination of two transmitted signals, which in theory may create an entirely different frequency, capable of traveling as a plasma wave that is subsequently converted back into the original signal, are among the range of possibilities. 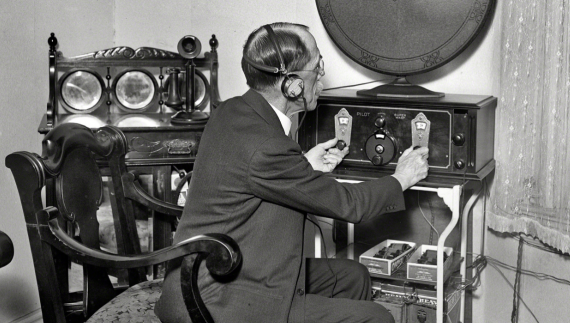 In his 1979 paper “Generation of Long-Delay Echoes,” which appeared in the Journal of Geophysical Research, researcher D.B. Mudrew proposed an equally compelling theory he called “ionospheric memory.” In it he discussed “ducts” in the ionosphere, in which radio signals may become trapped. While these ducts might explain one or two-second delays, radio signals lasting much longer would require a more elaborate explanation. Muldrew proposed that natural conditions might be conducive to the formation of electrostatic waves capable of forming and moving throughout the ionosphere, which might function similar to a natural memory device. Thus, the signals might appear to return much later, with delays of up to 40 seconds made possible by this natural, electrostatic form of “ionospheric memory.”

Despite the completeness of some of the existing theories, as well as the suggestion of possible "alien" explanations for the phenomenon, scientists still recognize the LDEs as a valid mystery. To date, no single proposed solution has been able to account for the odd, lengthened delays, which are still reported by both amateur and professional radio operators.