Green isn’t exactly a good color for a lake to be, but it’s better than blood red. Satellite images show that Iran’s Lake Irmia was bright green on April 23rd and blood red on July 18th. What’s happening?

Lake Irmia (also called Orumiyeh, Orumieh or Urmia) is a landlocked salt lake in northwestern Iran. Once one of the world’s largest salt lakes, it’s rapidly shrinking despite the fact that it’s fed by about 60 rivers and streams. That’s probable cause number one: the rivers bring a steady supply of salts to Lake Irmia but not one flows away from the lake, taking salts out. Instead, they build up in the waters and crystallize around the shore. Satellite images show Lake Irmia rimmed with salt like a massive strawberry margarita. 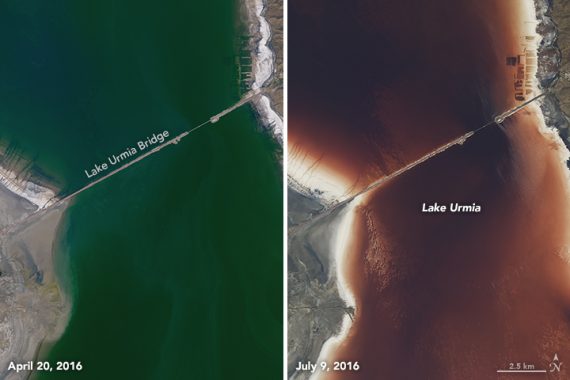 Probable cause number two is shrinkage (not the George Costanza type). Images from the Thematic Mapper on the Landsat 5 satellite show the drastic reduction in the lake’s size, according to University of Stuttgart scientist Mohammad Tourian.

The lake volume has been decreasing at an alarming rate of 1.03 cubic kilometers [0.25 cubic miles] per year. The results from satellite imagery revealed a loss of water extent at an average rate of 220 square kilometers [85 square miles] per year, which indicates that the lake has lost about 70 percent of its surface area over the last 14 years.

Whether the shrinkage is due to climate change or river damming, the result is the same – an increase in the already-high salinity of Lake Irmia. 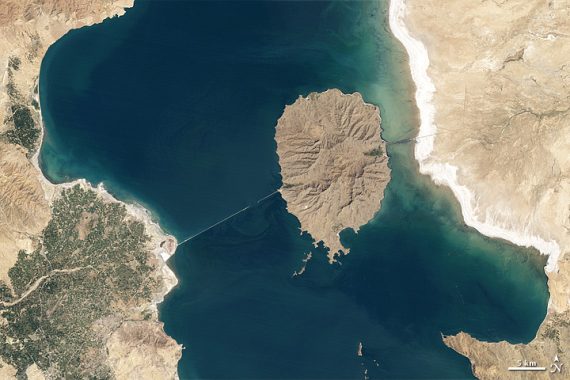 Which leads to probable cause number three: algae. According to NASA’s Earth Observatory, the guilty algae may be difficult to identify. The algae Dunaliella salina usually gets the blame because it is known to turn red when producing carotenoids in its cells as protection from sun and salinity. Another possibility is the bacteria Halobacteriaceae, which has a ruby color and likes salt.

One more bit of unpleasant news for Lake Irmia fans … the color change may be permanent. The lake has cycled between red and green several times, returning to green when rainfall and snow melt reduce its salinity. With climate change, drought, damming and a bridge across the river restricting water circulation, Lake Irmia may never go green again.

That would be a bloody shame.