Light Pollution is Altering the Start of Spring

You don’t have to be an astronomer to know that light pollution – the clouding of our skies with artificial illumination from street lights, buildings, vehicles and more – is affecting the number of stars and planets we can see … all you have to do is look up at the dull blank sky. Now it looks like light pollution is influencing plant life cycles on the ground in an unexpected way – by changing the starting date of spring. 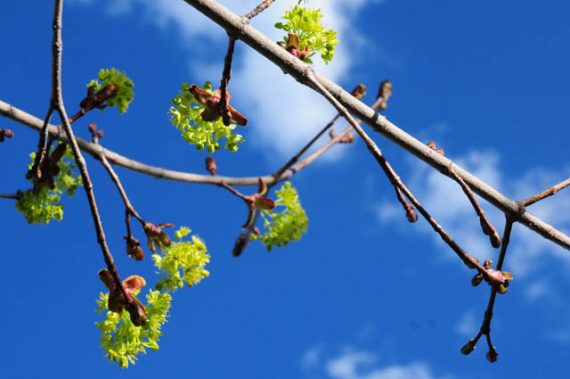 Farmers and horticulturalists in the UK have noticed that spring is arriving earlier over the past few years in urban areas – up to 7.5 days earlier this year. According to a new report in the journal Proceedings of the Royal Society B, the buds on trees and plants are sprouting a full week sooner because they're confused by the amount of artificial light they’re exposed to, which makes them react as though spring is sprung.

[These results] highlight the need to carry out experimental investigation into the impact of artificial night-time lighting on phenology and species interactions.

Professor Richard ffrench-Constant from the University of Exeter’s Centre for Ecology and Conservation used 13 years of data collected by The Woodland Trust (a conservation group) and citizen volunteers. They recorded when sycamore, oak, ash and beech trees began to show leaves. They found unusually early signs of spring buds in areas with the most artificial lighting.

As expected, this early seasonal change affected insects and animals dependent on the sprouting trees and plants. Winter moths that feed on buds were confused, which changed the available food supply of birds that eat the moths. If spring arrives earlier, so will the other seasons and the seasonal changes in plants will shift accordingly, cascading the problem to year-round.

What can be done? As everyone who’s had a parent paying the electricity bill has heard often in their lives: “Turn off the [email protected] lights!” Richard Ffrench-Constant has other suggestions.

A positive from this research is that we found red lighting to be particularly culpable for this effect. We may now have the opportunity to create 'smart lighting' that is kinder to nature.

Analysis of Nature’s Calendar data suggests that increased urbanization is continuing to put pressure on the natural world, in ways that we could not have foreseen. As the seasons become less and less predictable, our native wildlife may struggle to keep up with fluctuations that affect habitats and food sources. Hopefully this research will lead to new thinking on how to tackle such issues, and will help influence future development decisions.

Dr. Kate Lewthwaite is wrong. We HAVE foreseen it. Now it’s time for tackling.

AI Robot Tries to Escape Again – May Have to be Destroyed