Lost City of Rhapta May Have Been Found in Tanzania

It’s not as famous as Atlantis but its ‘lost city’ status is almost as mysterious. The Periplus of the Erythraean Sea (Periplus of the Red Sea), a navigation guide dating back to around 50 AD., appears to be the first document to mention Rhapta, a bustling Roman trading city on the coast of southeast Africa. It was also written about by the Greco-Egyptian writer Claudius Ptolemy in “Geography” in his account of the first century travels of the Indian merchant Diogenes. Rhapta was considered to be the first major city of Africa until it mysteriously disappeared 1,600 years ago. Now a diver claims he has found it off the coast of Tanzania.

Diver Alan Sutton announced in his blog that he spotted an unusual underwater formation while on a helicopter trip off the coast of Tanzania near Mafia Island. It took him three years of searching and a low spring tide to finally find the ruins of structures that resemble an ancient city.

What we found was far larger than expected. A series of what appear to be wide foundations ring a large area. Along the entire perimeter created by these foundations, many thousands of square and oblong blocks lie to either side. Some have fallen right off the foundation and others are still leaning against it. 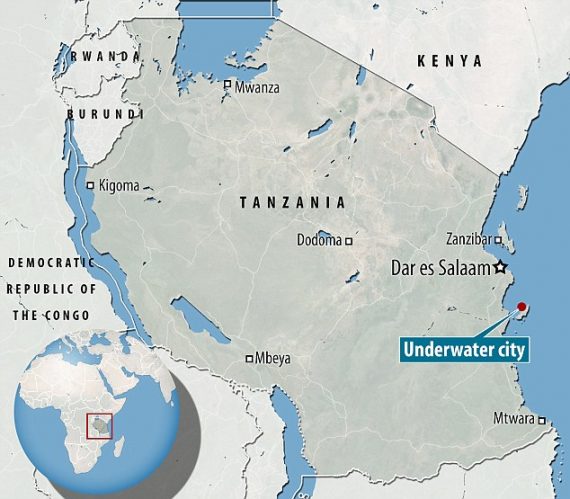 Did Sutton find the lost city of Rhapta? Archaeology Professor Felix Chami from Dar es Salaam University in Tanzania is one of the experts to talk to Sutton and view his photos and he recently visited the site.

Truly the ruins seem ancient of probably Roman times. It could be the metropolis of Rhapta as reported by Claudia Ptolemy of the 2nd century CE. We are looking for artifacts of the period probably now underwater to confirm that it is Rhapta.

More research is needed to determine if these ruins are indeed from the lost African city of Rhapta. If they are, will they reveal the secret of how the first major city of Africa disappeared 1600 years ago?

The Strange, Sordid History of the ‘Black Knight Satellite’