Lost in Space: “Weird” Events Led to the Destruction a $273 Million Dollar Satellite

While the objective had been, rather ambitiously, to "unlock the mysteries of the universe," it seemed that the folks at the Japan Aerospace Exploration Agency (JAXA) had a significant problem on their hands.

Designed to gather new data about X-rays emitted by black holes, JAXA's Hitomi satellite had been one of the most exciting new scientific endeavors of the year. But back in March, after much publicity that followed a developmental program to the tune of $273 million, JAXA's satellite experienced an unusual problem which, at the time, remained unidentified. This issue, whatever its cause, resulted in the widely-anticipated satellite's hurtling off into space, lost to the infinite depth of the cosmos before its story could be fully told.

Speculation at the time suggested that the satellite may have collided with a bit of space junk, while technicians suggested that one of the thrusters onboard could have malfunctioned. Then again, maybe extraterrestrials, annoyed with the meddling nature of humanity, just decided to blast the damned thing (okay, not really... though frustrated technicians at JAXA certainly hoped that some external cause had been at the heart of the problem). 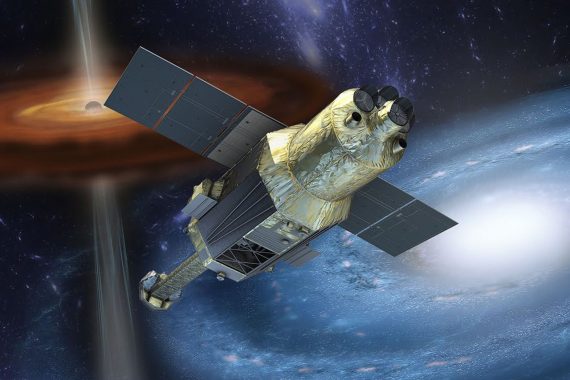 As it turns out, it wasn't any of these things that sent the Hitomi satellite blasting off into oblivion. New data released by JAXA indicates that the problem had actually been, in likelihood, human error. An issue that apparently stemmed from software programming in the satellite's control systems led to the satellite losing control, which resulted in the destruction of solar panels attached to both sides of the satellite's main body. This effectively rendered Hitomi's primary power source useless.

The warning signs leading up to the satellite's ultimate demise were less than obvious. Operators at JAXA had noticed strange bits of debris around the satellite (in likelihood, this may have been portions of the detached solar paneling). This was followed by the uncontrolled spin, which first seemed to indicate the seriousness of the problem at hand.

Despite the complete loss of control of the Hitomi satellite, perhaps its failure wasn't entirely in vain after all. A paper appearing in the journal Nature on July 6, 2016, outlined the discoveries that resulted from the Hitomi project; specifically, this dealt with what role plasma bubbles in distant galaxies play in the formation of motion, which prevents "runaway radiative cooling", a process the paper defines as active galactic nucleus feedback.

For the laymen, however, there are simpler things to be gleaned from the information retrieved from Hitomi. Gizmodo reported today that among the final images captured by the Hitomi satellite had been an image of the Perseus Cluster, whose galaxy (clocking in at slightly closer to us in miles than the same figure of $273 million spent on the satellite) is home to a supermassive hole.

To the surprise of researchers, the remarkably "quiet" nature of the galactic center sheds new light on the way black holes affect the size of nearby galaxies. If anything, they appear to be directly related to the rate at which galaxies grow, according to a statement from Brian McNamara of the University of Waterloo, one of the paper's co-authors.

In retrospect, some might still consider the circumstances leading up to the untimely death of the Hitomi satellite a little "weird." What oversights could have led to the programming issue that took Hitomi offline, and how can such costly problems be prevented in the future?

Regardless, this story nonetheless seems to end on a positive note; after all, considering the problems it experienced before it went down, there certainly could have been far less that it managed to send us. Altogether, the results of the data JAXA's satellite did manage to gather leave us with positive new data about black holes, and the role they play in the formation of galaxies throughout our universe.

Ionospheric Memory? The Mystery of the Long-Delayed Radio Echoes