There are some places in this world that seem to perfectly encompass mysteries both ancient and modern. Here historical oddities reach up through time and meld with those of the present, generating a continuum of puzzling enigmas and high strangeness reaching back into the blurry recesses of time and out into the uncertain future. One such location can be found in the country of Hungary, situated within its largest city. It is an awe-inspiring, vast labyrinth of darkened, winding passages stretched out within the bowels of the earth under one of the nation’s most treasured historical spots, and through which have long echoed a brooding history punctuated by curious mysteries that have continued up to the modern day. Here is a place that offers up a strange brew mixing sinister history, general weirdness, supernatural menace, and ominous tales of government conspiracies and cover-ups. Let us journey down into the stygian black depths of this mysterious labyrinth.

Located in Budapest, Hungary, on the southern tip of Castle Hill, is an imposing castle and palace complex known as Buda Castle, or Budavári Palotain in Hungarian. First constructed in 1265 and registered as a World Heritage Site in 1987, the luxurious, majestic complex was originally meant as a palace for Hungarian kings through the ages, and it has a long and tumultuous history. However, one of the most interesting features of this impressive complex is not what lies above ground, but rather below; a mysterious labyrinth of caves whose murky corridors have long been steeped in dark history and strange phenomena.

Snaking out below the opulent palace grounds is an intricate, maze-like network of interconnected caves that branch off in all directions into the darkness. What has come to be known as the Labyrinth of Buda Castle started out as individual natural caves under Castle Hill originally formed by the relentless flow of subterranean hot springs, which carved out a series of deep caves into the hillside. Ancient inhabitants of the region stretching back to the Homo erectus half a million years ago used the caves as a refuge from predators and enemies, and in later millennia the cool, dark caves would serve as a place to store food.

The caves in later years were seen as strategically important, and were artificially expanded until the smaller, separate caves were interconnected into the sprawling complex of passages and chambers that it is today, which stretches out for around 1200 meters (4000 feet) . This winding, labyrinthine cave system was used for military purposes as well as for a refuge in the event of fires or natural disasters, but its role would later expand to be used for wine cellars, a treasury, and even as a jail and torture chamber. The caves were also variously used as a secret place away from prying eyes to squirrel away stolen treasure or money to hide it from tax collectors, and as a military hospital from the 1930s through World War II, during which time the massive complex was said to be able to accommodate up to 10,000 people at a time. During the Cold War, the caves were reinforced with concrete and steel to serve as a military installation.

Of course, such a dark, dank, and spooky place is bound to have its share of sinister stories. One of the most well-known of these is that in the 15th century, the cave system served as a prison for none other than Vlad Tepes, or Vlad III of Wallachia, more notoriously known as Vlad the Impaler or Dracula. According to the tale, Vlad was betrayed by the Hungarian King Matthias and imprisoned within the dim dungeon of the caves of the hill’s underbelly to languish for an indeterminate amount of time, estimated to be up to 10 years, during which time it was said that he was mercilessly tortured regularly during his stay in these dim recesses. Indeed, legend has it that it was his traumatic and harrowing stay in this subterranean hell hole that turned Vlad into a madman known for brutal torture, murder and cruelty, as well as his signature habit of impaling enemies on giant stakes, leading to his notorious nickname "The Impaler." Some versions of the story go even further, claiming that upon his death Vlad Tepes was entombed within the cave system. Eerily, it is said that he was first decapitated, with his body buried within the caves and his head somewhere else.

Other spooky stories are that many people were thrown into the caves and simply left to die and rot, and there have been numerous human skeletons found throughout the cave system attesting to this. Although it is mostly unknown where these skeletons came from, there have been a few that were thought to have been from a Turkish harem dating back to the Ottoman Empire. One sinister theory as to why these women died here is that their master, the Pasha of Buda, simply got bored with them and had them walled up alive within the caves.

In addition to skeletons, other strange and often somewhat unsettling things can be found throughout the cave network. Strewn about are various statues of unknown origins and in differing states of decay, often missing limbs or even their heads. One notable statue here is called the Shaman with Two Faces, and depicts a shaman with one face on each side of his body. The walls are adorned with strange and inscrutable ancient symbols carved directly into the stone, possibly for religious purposes but no one really knows for sure, as well as paintings upon the walls. Also found in numerous locations throughout the cave network are the vestiges of its days as a torture chamber, such as rusting metal bars and discarded torture equipment left to decay in the dark depths. There is also to be found in the caverns a mysterious fountain said to have been built by a King Mátyás and which constantly gurgles up wine for purposes unknown.

In addition to the bizarre relics and dark history of the Buda Labyrinth are stories of a decidedly supernatural nature. Visitors to the caves have long told of hearing mysterious far off shrieks or screams from an unknown source, as well as of being tapped or pushed by unseen hands or of seeing dancing lights in the dark. Since the 19th century a shadowy specter said to wear some sort of cape has often been sighted skulking about in the dim tunnels here. The phantom is called the “Black Count,” and is thought to be the ghost of a 19th century count who had lost all of his money and retreated into the depths of the caves to live with a group of bandits and steal from the rich. Another idea is that it is the spirit of Vlad the Impaler himself.

The intriguing history of the caves, their oddly haunting beauty, and their myriad oddities made them into a popular tourist attraction. Starting from the early 1980s, various tours opened, which fully played up the creepy atmosphere of the place and even managed to add to it. Creepy wax figurines wearing a variety of period clothing for different eras were put up in various locations around the caves and one program called the “Labyrinth of Lanterns” was carried out in near total darkness, with each visitor only allowed a single small lantern to push back the blackness as they felt their way along twisting passages with only a rope. A 2011 program called “Wanderings with The Great Ones of Europe” similarly used lanterns, with solitary visitors going off alone with just the lantern to hold back the encroaching darkness. Tours have also tended to play spooky music and use a variety of gimmicks and cheap scares to exploit the claustrophobic, eerie location with its dark tunnels and slimy, damp rock walls.

Despite these gaudy attempts to make the caves into something akin to a Halloween haunted house, the Buda Labyrinth still managed to draw in droves of visitors, and between 1996 and 1997, the cave network was extended to over 4,000 square meters and renovated to look more as it did before World War II. By 2000 was named one of the 50 most interesting places in the world, as wells as well as one of Hungary’s top 10 tourist destinations. Then, on July 29, 2011, a strange occurrence happened that would only cement the labyrinth’s reputation as a place of the bizarre.

On this day, the caves were suddenly and inexplicably raided by police and members of the Inspectorate for the Environment, who quickly and forcibly evacuated everyone from the labyrinth, both visitors and staff alike. Those who were there at the time recall that they had at first taken it to be a sign that there had been a terrorist attack or some other emergency and detailed how heavily armed police officers carefully monitored everyone as they were hurried along to the exits. However, when the people had been removed from the cave and the doors slammed closed, they soon realized that there was no such emergency and they were offered no explanation as to why police had stormed in like that or why they had been so suddenly and urgently kicked out of the caves.

Caretakers and other staff members of the Buda Labyrinth were just as confounded as visitors, as they had received no prior warning or word from authorities that such a raid was to take place. Efforts to follow up what happened in the following days led to silence from authorities, even as the doors to the caves remained closed. In some cases, some staff members were said to have been mysteriously replaced or fired, and all of this led to whispers of some form of government conspiracy or cover-up. In the meantime, the entrances to the cave were blocked off to cut the labyrinth off from the public. 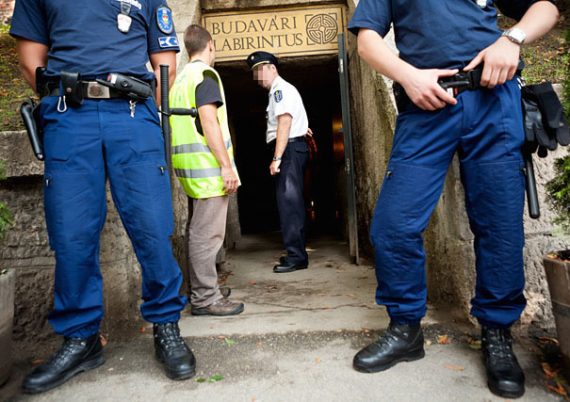 To this day it is uncertain just what prompted the raid and closure of the Buda Labyrinth. Theories range from the government trying to hide something, to that they found something mysterious down there in the tunnel depths, or that they were simply enacting measures to control, nationalize, and preserve this important heritage site in the face of encroachment from private companies and individuals buying up rights in the area, the steady influx of rowdy visitors, and the increasingly garish tours of the tour companies. Authorities have never given a straight answer explanation on why the caves were raided, and it remains a mystery. The Buda Labyrinth supposedly still remains largely closed to visitors and staff members save for occasional individual thrill seekers sneaking in and a handful of tours apparently still offered that are possibly entering the shut-down caves illegally.

There can be no doubt that Hungary’s Buda Labyrinth holds its share of mysteries and oddities, and it is certainly a place that poses far more questions than answers. What secrets lie deep down in the dark spider web of tunnels and passages buried beneath the country’s most notable World Heritage Site? What is the extent of its varied and turbulent history? What other historical oddities or strange phenomena lie hidden in the blackness here? Are there more skeletons that lie here forgotten? Why was this once bustling tourist attraction suddenly and inexplicably shut down? Although most, if not all of these questions may forever remain unanswered, one thing that seems clear is that these murky passages are one of the spookiest, weirdest, and intriguing places in the world.