Mysterious Vanishings at the Nevada Triangle

Throughout the world there are places that seem to be destined to forever be linked to mysterious, inexplicable vanishings. From the Bermuda Triangle to the Bennington Triangle, we have triangles galore, often triangles, that reach out to make people simply disappear from the face of the earth. These places are in a sense hungry, drawing in people who would dare to reach forth into their wilds, only to keep what they have gained to never return them. One probably lesser known such place lies out across a large expanse of dusty desert and mountain in the state of Nevada, and it is a location that seems to be every bit as enigmatic and ominous as any of its brethren.

Sprawled out over a vast expanse of 25,000 square miles of a desolate landscape of desert, mountains, and scrub near the Sierra Nevada mountains and Great Basin Desert in the U.S. state of Nevada, looking as if it is the surface of another planet, is an area that has over the years accrued for itself a rather sinister reputation. Besides being in the vicinity of the notorious, top-secret Area 51 and a range of strange UFO sightings, the region has also become a mysterious place where hundreds, perhaps even thousands of planes have flown into, never to return, earning it the ominous nickname of "The Nevada Triangle," after its more famous Bermuda cousin.

The Nevada Triangle is typically defined as spanning from Las Vegas in the southeast to Fresno in the west, and to Reno at the top. It is said that this moonscape of sparsely populated rugged wilderness has been the site of by some estimates around 2,000 aircraft crashes over the past 60 or so years, with many of these happening under mysterious circumstances, with experienced pilots, without any clear reason, and with wreckage never found. In some cases these have been rather large, rugged military aircraft such as B-24 Liberators or B-17 Flying Fortresses

By far the most famous such crash to happen within the Nevada Triangle is that of the billionaire maverick businessman, sailor, aviator, and adventurer James Stephen "Steve" Fossett. Famous for a wide range of world records, such as being the first person to fly solo nonstop around the world in a balloon as well more than 100 other records concerning nonstop circumnavigations of the Earth, as well as aviation and sailing, Fosset was also a fellow of the Royal Geographical Society and the Explorers Club. He was an extremely talented pilot with several models of aircraft, on which he had clocked countless hours of flight time, and was well respected in the world of aviation. There is certainly no disputing his impressive experience.

On September 3, 2007, Fossett departed from the Flying-M Ranch in Nevada in a single-engine Super Decathlon light aircraft for what was to be a quick round-trip joy flight, with a planned return to the same airport from which he had departed shortly after. At the time no one thought anything of it. After all, this was one of the most decorated and well respected aviators in the world on a routine flight under clear conditions; there should have been no problems at all.

When Fossett failed to return at the designated time, people began to worry. An intense, complex search was launched to try and find him, which stretched on for a month as authorities scoured a 20,000 square-mile (52,000 km2) area of harsh, forbidding wasteland, but they found no trace of where Fossett or his plane had gone, not even a scrap. Although the search was one of the largest, costliest, and well publicized in U.S. history, not a single piece of wreckage was ever turned up, nor was there any indication of a transmission from the aircraft’s emergency locator transmitter, although the search team did turn up a number of other planes crashed out in the desert that had been forgotten and missing for decades. The search for Fossett was officially called off on September 19, 2007, although aircraft would be kept on standby to respond to any anomalous crash sites that turned up, but by this time Fossett was largely thought to be most certainly dead. On October 2, 2007, the search was called off for good.

Many had still not given up on Fossett, as private search flights were still going on, including even a team of psychics on the case, and on August 23, 2008 a massive search on foot was launched based on new information that had turned up, but like those before them nothing was ever found. In the meantime, the strange disappearance had caused wild theories to swirl around it. Some believed that Fossett had faked his own death in order to start a new life somewhere else, while others believed that he had been shot down by the military when he got too close to Area 51, that he had entered some sort of strange vortex, or even that he had been abducted by aliens. In the end, nobody knew.

Then, on September 29, 2008, a hiker stumbled by chance across some of Fossett’s belongings out in the wilderness, including a crumpled up FAA-issued card, a Soaring Society of America membership card, and a rather large clump of $1,005 in cash. The items were found in a bleak, remote area located around 65 miles (100 km) from where Fossett had taken off. With this exciting clue, search efforts were renewed, and on October 1 an aerial search located the wreckage of the plane around 750 yards (690 m) from where the belongings had been found. Follow-up searches were unable to locate Fossett’s body, although two human bones were discovered that were found through DNA analysis to have belonged to him. The rest of the remains were thought to have perhaps been dragged away by scavengers and scattered across the landscape to never be found. Examination of the aircraft turned up no evidence of any sort of equipment malfunction, and the crash was blamed on a combination of extreme downdrafts of up to 400mph pummeling the light aircraft, proving no match for it, as well as the altitude and disorienting mountainous terrain.

Indeed it is the shifting, sudden fury of the area’s weather that has been offered up as one of the reasons so many planes might go missing here. The Sierra Nevada mountains run perpendicular to the Jet Stream, or high Pacific winds, which conspire with the sheer, high altitude peaks and wedge-shaped range to create volatile, unpredictable winds and downdrafts that can wreak havoc on smaller aircraft. This weather phenomena is sometimes called the “Mountain Wave,” and can literally pluck up airplanes from the air and toss them down to go hurtling into the earth like toys. Another factor could be simple pilot error, with inexperienced pilots not quite knowing how to handle the turbulence or the disorienting mountainous terrain of the area, with its sharp canyons and soaring cliffs. Indeed many pilots who have nearly crashed in the Nevada Triangle near the Sierra Nevada have reported experiencing a deep sense of confusion and profound disorientation during their flights. 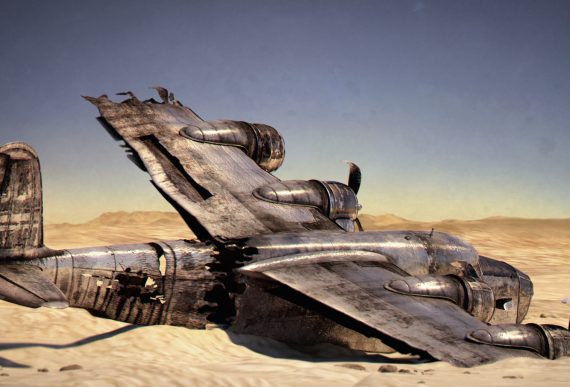 In the end, no one is quite sure of why so many planes have gone down here, some of them quite large planes rather than light aircraft and with experienced crews under ideal conditions, nor even how many planes have actually gone down here, and the area has managed to create an air of mystique around itself. Many still insist that there are forces beyond our understanding at work here pulling in planes to their doom. Talk of the Nevada Triangle is often punctuated with mentions of Area 51, aliens, or top secret tests of experimental aircraft, as well as the possibility of some form of magnetic anomaly or a vortex of some type.

Adding to the mysterious quality of the region is that many of the crashed planes have never been found. This is most likely due to the inaccessibility of the remote area, but sometimes things are stranger. One Army fighter pilot Lt. Leonard C Lydon said he parachuted from his plane when his squadron got hopelessly lost in the mountains here. He claimed to have clearly seen the P-40 fighter go down about a mile from his position, near the Sequoia and Kings Canyon national parks, and was sure that he knew where it had crashed. However, when a search team returned to the area he specified, no sign of any wreckage or the plane could be found.

So what is going on here? Is it aliens, the government covering its top-secret Area 51, magnetic anomalies, or something even stranger? Or are we just dealing with freaky weather that has a penchant for crushing smaller aircraft, coupled with the remote, unforgiving wastelands? There will probably always be tales of places on this planet that disappear people without a trace. We may not ever know the reasons why, or how, but they will always capture our imagination. These places will always lie out there, just beyond our reach and beyond our current capacity to comprehend them.