NASA Sends a DNA Sequencer to the Space Station

SpaceX launched another Falcon rocket into space and successfully completed its second ground-based landing … and that’s not the big news. In the hold of the cargo ship sent on its way to the International Space was a DNA sequencer. Whose DNA will it be used to test?

The DNA sequencer, called a minION, was developed by Oxford Nanopore Technologies, a UK company known for its nanopore sequencing products for the electronic analysis of single molecules and for its work on the idea of the “Internet of DNA” (now called the “Internet of Living Things”) which is a global network of millions of genomes that could be used to control pathogen outbreaks. 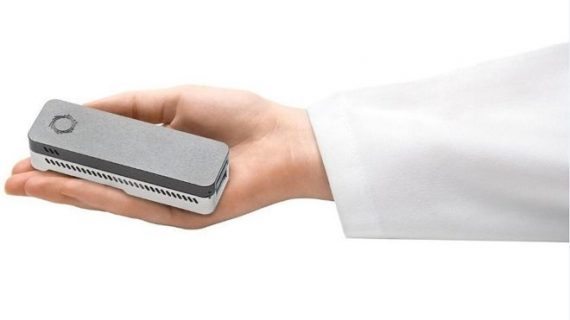 A device to control pathogen outbreaks on the ISS? What could that mean? No need to worry, says NASA. It’s just to test whether DNA sequencing is possible in microgravity. If so, it could help quickly identify and monitor microbes that might make astronauts sick, a process that now requires sending samples back to Earth on the next cargo ship, says NASA microbiologist Dr. Sarah Castro.

Currently aboard the space station there is not a real-time method for identifying microbes, diagnosing infectious disease, and collecting any form of genomic and genetic data concerning crew health.

Microbes from where? Believe it or not, NASA admits it could …

If the minION actually finds alien life on the space station, will NASA turn the camera off? Could it already be there, Dr. Castro?

In the past, we’ve had visible fungi growing on the ISS, and we want to know what that fungi is. Is it benign or something to be concerned about? Knowing what it is, the microbiologists can recommend what to do to deal with the issue.

What could the mysterious fungi be? Alien life or something left behind from astronaut Scott Kelly’s socks?

Whatever it turns out to be, both the SpaceX reusable rocket and the DNA sequencer will have played big parts in identifying it and future life forms on the ISS and beyond.