The Case For (Or Against) Bigfoot: Should We Suspend Our Judgement?

Since at least the early part of the 20th century, the concept of a mystery primate in North America has existed as a popular, cultural phenomenon. Much earlier on, Native American legends dealt with the idea in a similar, though culturally different fashion: stories often told of a mysterious "lost race" of giant Indians called the Seeahtik, according to the Clallam term, while other regional tribes used a similar, but slightly different word, Seeahtkoh, for these beings.

Today, the persistent belief in what has come to be known as "Bigfoot" is often erroneously attributed to having its origins in a hoax perpetrated by Ray Wallace near Bluff Creek, California, in 1958. As we discussed earlier, the concept had indeed existed much earlier on, though it is fair to note that there had also been hoaxes underway by as early as the late 19th century. These ranged from the alleged fabrication of large footprints, to much earlier newspaper hoaxes that included the Canadian story of "Jacko," a gorilla-like animal supposedly captured in 1884 near Yale, British Columbia.

The primary conundrum we face with the question over Bigfoot is one of what, exactly, the "good" data we have suggests. To-date, there appears to be little physical evidence that could bolster the case for the creature's existence, at least in a fashion suitable for the rigors of modern science. And yet, some would argue that anecdotal data and varied witness reports, even if only acceptable in the minority of "good" cases, must still count for something.

Based on the data we have, a friend recently asked me whether I count myself among those who "believe" in Bigfoot. While there is a part of me that certainly remains hopeful about the prospect, I cannot deny the qualms of the science-minded, who maintain that for such a creature to exist -- let alone a breeding population of them -- one would hope that at least some good physical evidence, incapable of being disputed or relegated to fakery, would have surfaced by now.

Still, fundamental to the argument about "belief" in a creature like Bigfoot is this notion that, in choosing what to believe, one must either become a Bigfoot proponent, or a Bigfoot skeptic. To the contrary, I would argue that in the case of a mystery where widespread belief, eyewitness sightings, and at least a modicum of evidence (though largely disputable) seems to exist, perhaps we are wrong to take a hard-lined stance at all... for now. Is it possible, in other words, that we have enough evidence to suggest a narrative worthy of scientific study, despite having any body of evidence that bolsters a reasonable case for proof?

One of the primary arguments against the existence of Bigfoot is the fact that there is nothing in the fossil record that indicates any indigenous ape species in North America. However, in March Roy Plotnick, a paleontologist at the University of Illinois, reported in a paper in Ecology Letters that we have only managed to record 9% of the fossils for the world's threatened mammal species in the present day, further noting that "nonthreatened mammals are twice as likely to show up in fossil databases at about 20%." In other words, modern animal species that are critically endangered (as we might take a creature like Bigfoot to be, if it exists) are indeed less prevalent in the fossil record.

Another important point is that while hominid fossils certainly do exist, they are quite rare, as discussed by author Donald R. Prothero in his book Evolution: What the Fossils Say and Why It Matters. "Hominid fossils are delicate and rare," Prothero writes, "and only one or two are found for every hundred fossil pig or fossil horse specimen found in the same beds in eastern Africa." Prothero further notes that this apparent lack of fossils was, at one time, a primary argument offered by creationists against the idea of human evolution; today, we have far more specimens that do show how humans evolved over millions of years.

Despite this, the human fossil remains that have been uncovered in North America are still very few, when compared with other animal species, with notable instances including La Brea Woman found near Los Angeles in 1914, as well as the Tepexpan man found in Mexico in 1947. As one might surmise, the primary reason for the scarcity of human fossil remains in North America, when compared with prevalence of sites found in Africa, is due to the fact that humans migrated to North America only recently, in terms of geological time.

Some proponents of the existence of Bigfoot, such as the late anthropologist Grover Krantz, suggested that other hominid species could have migrated to North America along with early humans. If this were indeed the case, our understanding behind the scarcity of human fossil remains, paired with the fewer numbers of fossil finds relating to modern critically endangered species, might help us understand how a creature like Bigfoot may not have appeared in the fossil record... yet, at least. 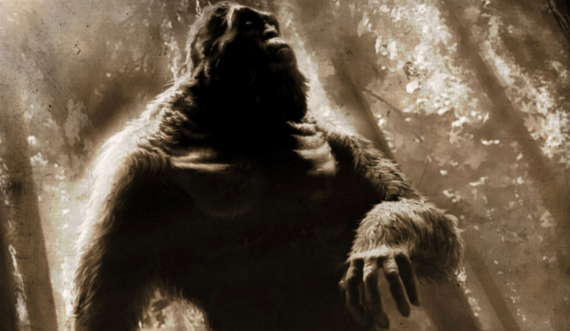 Granted, there are other ancient human cousins that would certainly have resembled Bigfoot; these include the genus Paranthropus, remains of which found throughout Africa, and Meganthropus, remains of which are most prevalent near Central Java, Indonesia (the Meganthropus genus, it should be noted, is disputed my many archaeologists, and viewed as likely being related to homo erectus). Each of these, based on modern reconstructions, bear characteristics that are similar to modern reports of Bigfoot, although each are believed to have been extinct now for millions of years. Though a direct correlation between ancient hominid fossils and Bigfoot cannot be made, what they show us, at very least, is that evolution certainly has produced hominids that are very similar to modern descriptions of Bigfoot.

However, we must take great care in making such comparisons, noting that while some ancient hominid species did resemble our modern concept of Bigfoot, this alone does not, in any way, "prove" the existence of such a creature in the present day.

Andrew Holmes, an evolutionary anthropologist at the University of Toronto, discussed this at his blog, Live Like Dirt, noting the importance of being able to distinguish between ancient, "Bigfoot-like" species, and the notion that any such creature might exist in modern times:

Authors in cryptozology community have made different claims tying Meganthropus to Yeti, Bigfoot, and the Australian Yowie. These claims are and not based on any additional data, but a mix of wild speculation and day-dreaming. I share this sense of enthusiasm for Bigfoot, just not the same conclusion. Very often it seems the desire to believe in Bigfoot often outweighs the evidence used to in the attempt to establish its existence. I will simply have to await the discovery of the bones.

Though science might help us understand a few reasons why we don't yet have good evidence of a creature like Bigfoot, that absence of data doesn't help build a convincing argument for it's existence. Hence, I would have to agree with Andrew here: we really do need a body, or bones, or something tangible before we can really make any serious determinations about all this.

Nonetheless, I would maintain that eyewitness reports, a multitude of which have been gathered over the years, must account for something. This is a position maintained by many reputable researchers over the years, most notably Smithsonian primatologist John Napier, who, as I've noted before, made a comment I've always found intriguing in his 1972 book, Bigfoot, where he surmised the following toward the volume's conclusion:

I am convinced that the Sasquatch exists, but whether it is all that it is cracked up to be is another matter altogether. There must be something in north-west America that needs explaining, and that something leaves manlike footprints. The evidence I have adduced in favor of the reality of the Sasquatch is not hard evidence; few physicists, biologists or chemists would accept it, but nevertheless it is evidence and cannot be ignored.

Whatever is behind the persistent mythos surrounding Bigfoot, I agree with Napier that it shouldn't be ignored. Thus, if there is too little evidence for science to accept the creature as a reality, can we suspend judgement on the matter until good evidence -- whether for, or against the case for Bigfoot -- does emerge?

I maintain that we can, and should, if we are truly to be unbiased with what evidence we've got. There may yet be surprises that await us in the strange, ongoing history of the American Sasquatch.

Predator Robots Are Learning to Track and Hunt Down Prey