Our planet is full of spectacular natural beauty in a mind boggling array of forms, which have long awed and inspired mankind. Yet what of the breathtaking places of the world that lie not above ground, but below it, under our efforts to try and tame the wild places? What of the examples of our world’s magnificence that have remained lost to us in their subterranean domains to never be seen by human eyes to be appreciated? It seems sad that many of our natural wonders remain unknown and buried away perhaps forever, but on occasion these elusive places come forward to make themselves known to us, often quite by accident, and we find ourselves confronted with magnificence which has been right below us all along. One such place is a submerged cave system in Russia which lurked hidden below ground for hundreds of millions of years, only to emerge from the dark and into our imaginations a mere few decades ago. 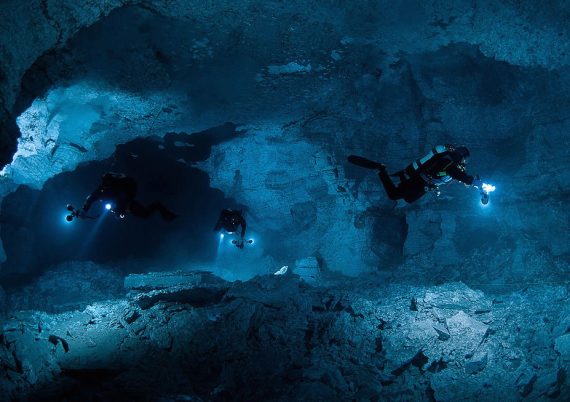 Within the depths of the earth beneath the Ural Mountains, near the rural village of Orda, around 100 miles east of the city of Perm, and hidden from civilization since we first even became aware of ourselves lies the mysterious and breathtakingly beautiful Ordinskaya Cave, also called simply Orda Cave. Here caverns and passages around 300 million years old sprawl out into an immense cave system spanning over 5.1 kilometers (3.2 mi), of which 4.8 kilometers (3.0 mi) lies submerged within crystal clear water, lending it an otherworldly, surreal beauty. Orda Cave is the largest underwater cave system in Russia, and it is remarkable for being composed of the mineral gypsum, which imbues the walls with translucent crystalline shapes and a pure, white color that casts an ethereal feeling over the entire expanse, and indeed Orda Cave is by far the largest gypsum cave system in the world. 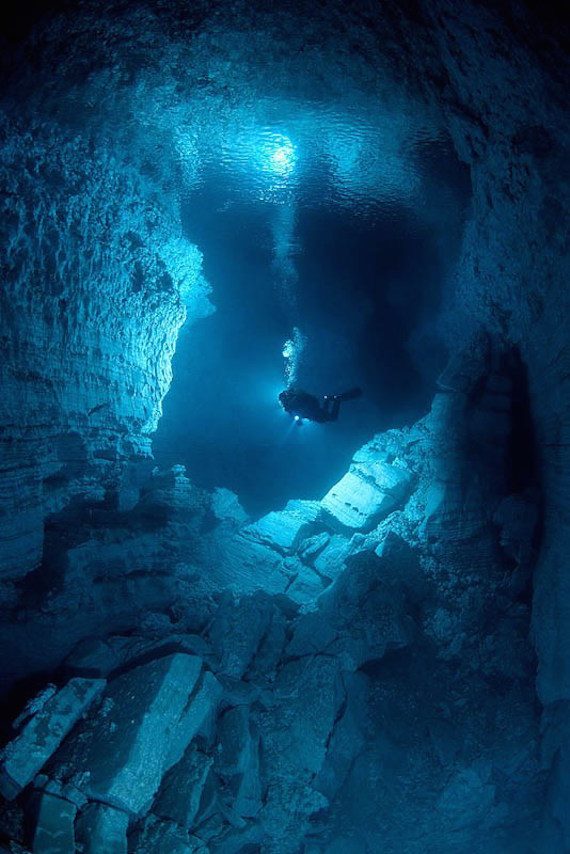 For most of its natural history, Orda Cave remained sequestered away within the bowels of the earth and hidden from mankind; a lost, crystal kingdom down in the dark. Many who walked above ground would have seen a fairly nondescript grassy hill peppered with sinkholes, and not have ever imagined the wondrous caverns that lurked down below their feet. It was not until the middle of the 20th century that the enormous cave system was stumbled upon quite accidentally by two young schoolboys, who discovered an entrance at the bottom of a pit. What they had found was something previously thought to not exist, and which would astound the scientific community and public alike; a huge gypsum cave complex unlike any other on Earth, with passages leading off in all directions into the unknown. 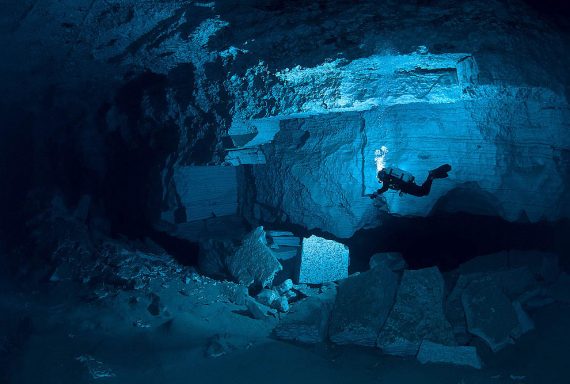 Although it was obviously a unique natural wonder the likes of which no had ever seen, few were willing to attempt to venture into the elaborate cave system, and fewer still brave enough to try and dive into its perilous depths, with winding, disorienting passages, darkened underwater corridors, and bitingly frigid temperatures. For decades the Orda Cave remained poorly understood, the extent of the vastness of this mysterious subterranean world unknown. It was not until 1994 that Russian diver Victor Komarov ventured forth into these uncharted realms and managed to explore the first 100 meters (300 feet) of darkened underwater tunnels with only a guideline to keep him from being lost in the mysterious labyrinth forever, and from there ever more elaborate expeditions were mounted, each one creating further surprise at just how far and extensively the caves stretched on into the cold dark water. Indeed, exploration into Orda Cave has to this day not fully mapped the system or found its end, and there could feasibly be many kilometers more penetrating out into ground.

Since these first explorations, Orda Cave has catapulted to one of the most famous cave diving sites in the world, although with is twisting passages, sharp walls, and water that can reach from 40℉ down to in excess of minus -9°F it remains dangerous and not at all for the inexperienced. Indeed, many divers have made their last dives in this world in Orda Cave, with around 300 deaths reported from here. However, for those with the skill, equipment, and sheer nerves of steel required for delving into this underwater cave domain, marvelous sights wait.

The vast gypsum deposits here help to filter the water to keep it amazingly crystal clear, which along with the total calmness grants visibility up to 130 to 165 feet (40-50m) or more, and gives one the illusion that they are not swimming, but rather flying through the many expansive underwater caverns, cathedrals, grottos and chambers of this dreamlike world. The same mineral takes many crystals shapes along the walls and creates a blue hue to everything, giving the whole vista an unearthly quality, like an undersea realm of some alien world. It would almost not be surprising to see some alien, bioluminescent organism come pulsating and hovering through the water here. 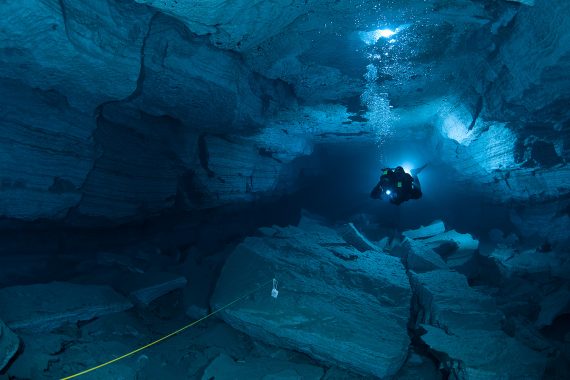 Interestingly, since the cave system is composed of gypsum and anhydrite rocks, which are highly water soluble and fragile, prone to being shaped by the tiniest water movements and even the bubbles from diving masks, the shape of the caves is constantly changing. The caves are different today that they were when they were first discovered, and will further transform over time, opening new passages and closing old ones, making the whole area an ever shifting, ever metamorphosing environment, like some giant living organism. 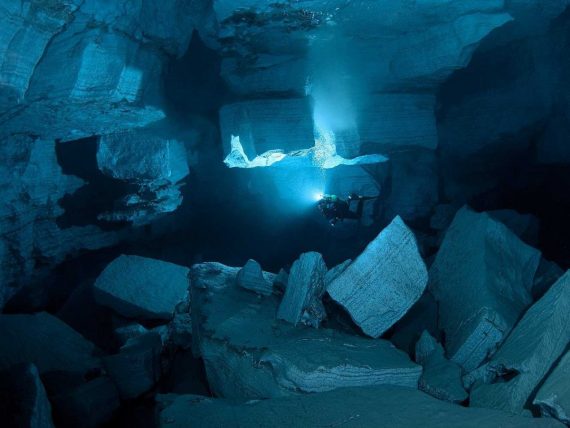 It is perhaps no surprise that this eerily beautiful, otherworldly spectacle has given rise to legends, and one of these is the tale of a spirit or ghost said to inhabit the cave system and who is known as “The Lady of the Cave.” This spirit is said to take on the form of a beautiful maiden in white gowns which billow out around her in the water, and rather than a malicious entity she is said to protect and guide divers who journey into the caves. This legend has served as the inspiration of a unique photography project by Russian photographer Viktor Lyagushkin, who had free diver Natalia Avseenko pose for underwater shots depicting her as the mysterious Lady of the Cave, all the while enduring icy temperature and holding her breath during each shoot. The results are a series of photographs that are decidedly stunning, with an ethereal, supernatural quality to them. 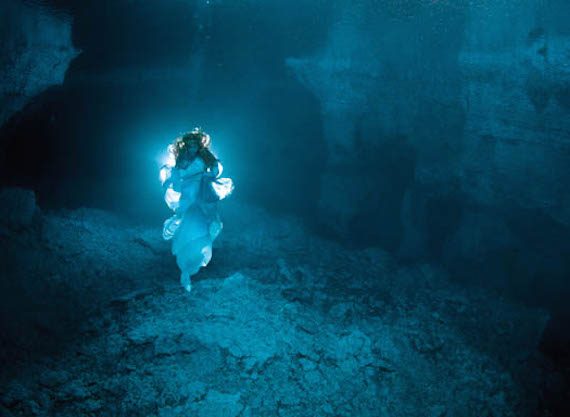 With the Orda Cave we have a place full of haunting, maybe even haunted, beauty that long evaded the admiration of humankind by remaining locked away beneath us for eons. What other wonders remain out there on our planet, down under our world of sunlight and civilization? How many more fantastic subterranean realms beyond what we can imagine stretch out beneath our feet, isolated for millions of years and perhaps forever to remain that way? Our planet is full of secrets and breathtaking beauty that we may never witness, and there are still whole majestic, undiscovered worlds that we may be walking over right now. Truly one of our last frontiers is not the space out past our atmosphere but far below it, and these lost lands could be anywhere. Perhaps you will be the next one to find such a place.

Water Tunnels Found Under Mayan Pyramid But No Spaceship