Titan Proves an Even Stronger Contender for Alien Life

In the search for alien life, Titan is a pretty strong contender. The largest of Saturn's moons, it has the most Earth-like atmosphere discovered yet, with lakes, rivers and rainfall. Sure, these rivers flow with methane, not water, and the moon's temperatures hover around -290 degrees Fahrenheit, but it's still remarkably Earth-like. And a new study suggests that Titan has prebiotic conditions; chemicals that could come together and form life.

The study, performed by scientists at Cornell University and recently published in the Proceedings of the National Academy of Sciences draws on data from NASA's Cassini and Huygen's missions into Titan's dense atmosphere.

And it turns out that the properties of the moon that make it utterly unappealing for human habitation may just carry the key chemical components that make it a contender for alien life. When sunlight hits Titan's dense, yellow, methane and nitrogen packed atmosphere, hydrogen cyanide (HCN) is formed.

Generally HCN is something that we'd want to keep away from, but it is an important precursor for life even here on Earth. And on the frigid surface of Titan, HCN can still react with itself or other molecules to form long chains, or polymers, called polymine. 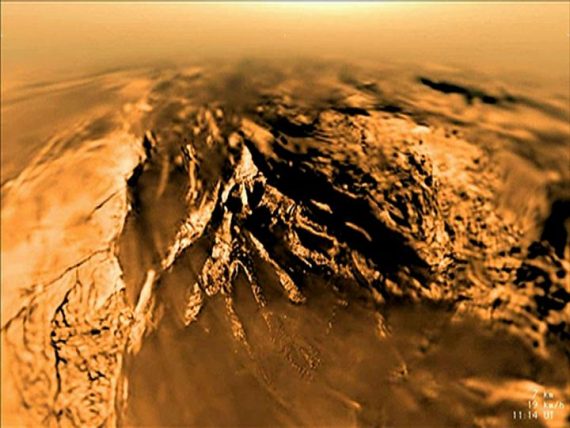 Martin Rahm, postdoctoral researcher in chemistry at Cornell University and lead author of the new study, explained in a statement:

Polyimine can exist as different structures, and they may be able to accomplish remarkable things at low temperatures, especially under Titan's conditions.

Extraordinary things such as absorbing the sun's energy, and perhaps even becoming a catalyst for life. Rahm continued:

"We need to continue to examine this, to understand how the chemistry evolves over time. We see this as a preparation for further exploration. If future observations could show there is prebiotic chemistry in a place like Titan, it would be a major breakthrough. This paper is indicating that prerequisites for processes leading to a different kind of life could exist on Titan, but this only the first step.

Dinosaurs Extinction Due to a “One-Two Punch”