World’s Only Philistine Cemetery May Hold Grave of Goliath

It’s one of the most famous stories in the Old Testament and has been an inspiration to underdogs ever since. An young boy-who-would-be-king named David goes up against a colossus Philistine whose name would be forever association with giants – Goliath – and brings him down with a sling and a stone. As with most war stories, not much is known about the losing side in that one either. Now for the first time, archaeologists have discovered a Philistine cemetery that is revealing more about the people and possibly their large warrior.

Daniel Master, professor of archaeology at Wheaton College and co-director of the Leon Levy Expedition, was excited when the 30-year exploration project at Ashkelon in southern Israel uncovered a 3,000-year-old Philistine cemetery. Once located on the Mediterranean coast, Ashkelon is one of five cities known to be Philistine and was a major port until destroyed during the Crusades. While Philistine artifacts and houses have been periodically uncovered, this first known cemetery may change previous assumptions about them.

This forms a baseline for what 'Philistine' is. We can already say that the cultural practices we see here are substantially different from the Canaanites and the highlanders in the east.

Master says about 150 individual skeletons were found buried with personal jugs and jars which most like contained perfumed oils. Some wore jewelry while others were buried with their weapons. The skeletons are undergoing DNA, radiocarbon and biological distance testing to determine the true origin of the Philistines. The style of the burials - open pits and cremations rather than raised platforms - suggests they may have come from the Aegean Sea area.

The Philistines have had some bad press, and this will dispel a lot of myths.

Researcher Lawrence Stager from Harvard University confirms that the Philistines are notorious bad guys in the Hebrew Bible/Old Testament, most likely because they were uncircumcised, once stole the Ark of the Covenant and bribed Delilah to cut Samson’s hair and sap his strength. Then there’s Goliath.

Could one of those skeletons buried with a weapon in this cemetery be the legendary big bad Goliath? So far, no archeologist has identified any remains of an unusual size. In fact, there is disagreement on whether this is actually the first Philistine cemetery discovered, as others alleged to be Philistine have been uncovered near Tel Aviv and in southern Israel.

Whether a 7-footer with a nasty skull fracture is discovered or not, the story of David and Goliath will remain everyone’s favorite “the bigger they are …” tale. 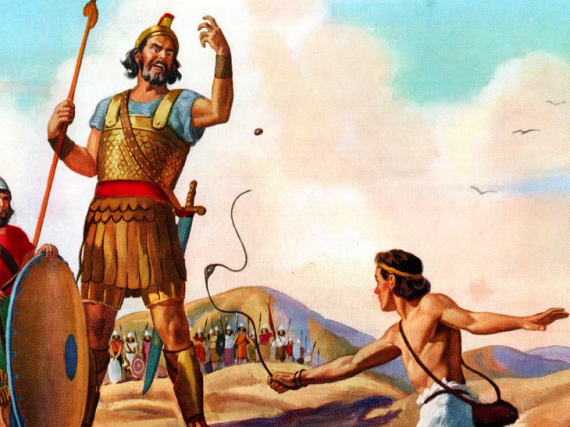