A Brief Look at the Life and Ideas of John A. Keel – Part Two

Not only was the Point Pleasant area, as explained in Part One of this article, found to be a hotspot for winged-humanoid sightings and strange aerial lights, but also, observed Keel, to a host of other paranormal manifestations, including poltergeist hauntings, electrical disturbances in the form of television sets “burning out at an alarming rate” and telephones “going crazy, ringing at all hours of the day and night with no one on the other end.” Even creepier, “Some people were getting calls from mysterious strangers speaking a cryptic language.”

It didn’t take Keel long to recognize that all of these bizarre occurrences were related, and, further, that they had nothing to do with extraterrestrials and more to do with psychic phenomena and the occult. He explained:

“Some UFOs were directly related to the human consciousness, just as ghostly apparitions are often the product of the percipient’s mind. There are deeply rooted psychic and psychological factors in the UFO phenomenon, and the sudden appearance of a light in the sky triggers and releases the human energy that stimulated seemingly supernatural events.” 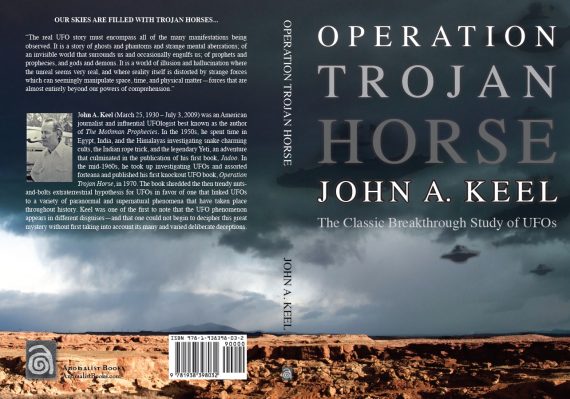 On December 15, 1967, roughly a year after the first Mothman sighting, the Silver Bridge, which stretched across the Ohio River, connecting Point Pleasant to Gallipolis, Ohio, collapsed while loaded with rush-hour traffic, resulting in the deaths of 46 people. As there were few additional Mothman sightings following the tragedy, the belief emerged that the two were related, and the Mothman came to be seen as a harbinger of doom. Keel’s book on the mystery, The Mothman Prophecies (1975), was made into a successful movie starring Richard Gere.

As a very real example of the idiom “we attract that which we think about,” Keel found himself targeted by the very phenomena he was trying to unravel, causing him many headaches and countless bouts of paranoia. Cryptic messages kept appearing on his answering machine, he was plagued by strange men in dark suits who drove black Cadillacs (the so-called “men in black”), and he discovered that his phone was being tapped and his mail interfered with. Although some of these bizarre incidents were likely the work of the intelligence community, others defy logical explanation and instead point towards those “cosmic pranksters” he called the “Ultraterrestrials.”

These mysterious entities, reasoned Keel, are somehow indigenous to Earth yet inhabit a dimension beyond time and physical matter. By shifting up and down through the electromagnetic spectrum, they can materialize and dematerialize as they please. Though they can be either good or evil, they seem to delight in manipulating and tricking human beings. Throughout different cultures and periods in history, we’ve referred to them by such names as gods, demons, spirits, fairies, angels, and monsters. Encounters with them have spawned entire religions—for example, Joseph Smith’s visit from the angel Moroni, which led to the birth of Mormonism. Today we perceive them as extraterrestrial in nature.

From Keel’s perspective, then, the UFO mystery is simply a modern version of the same “game” the Ultraterrrestrials have been playing on humanity since time immemorial. As to what these entities are trying to achieve, he speculated that they operate as part of a “subtle cosmological system of control [that] has been in effect since the dawn of humanity.” This view mirrors that of the French computer scientist and UFO researcher Jacques Vallee, who hypothesized that the UFO phenomenon is “a control system for human consciousness.”

Besides the Ultraterrestrial hypothesis, which is one of the more intelligent theories to explain the origin of UFOs, another contribution of Keel’s is the finding that UFO sightings tend to recur within specific geographical locations he called “window areas,” perhaps due in part to local geomagnetic factors. “The earth’s magnetic field is probably the culprit in many cases of seemingly inexplicable phenomena,” he wrote. “Our planet is pockmarked with magnetic anomalies and aberrations.”

Keel, who passed away on 3 July, 2009, at the age of 79, left behind countless articles and many books. The latter include UFOs: Operation Trojan Horse (1970), Strange Creatures from Time and Space (1970), Our Haunted Planet (1971), The Eighth Tower (1975), Disneyland of the Gods (1988) and the comedic novel The Fickle Finger of Fate (1966). Humble and possessed of a dry wit, he stressed that “nobody is an authority on UFOs,” including himself, and that he expected to be remembered “as a novelist and playwright—if I am remembered at all.”

Louis Proud
Louis Proud who lives in Melbourne, Australia, is a writer and researcher specializing in paranormal and occult phenomena. His work has been published in Fate, Mysteries, New Dawn, Nexus and Paranormal magazines. His interests include film, radio-controlled models and anything to do with the mysterious and unexplained. His recently published book, Dark Intrusions: An Investigation into the Paranormal Nature of Sleep Paralysis Experiences, is available from Amazon in the USA and the UK. Louis Proud can be contacted at [email protected] Visit his blog: http://louisproud.wordpress.com