Anyone who’s ever lived in a college dorm room knows that bad things probably happened there in the past and it’s best not to look behind or under things or to peer into mysterious holes in the wall. How bad must things have been at St. John's College in Cambridge , England, in the 17th century to convince students to place an ‘evil spirit’ trap in a wall?

The spirit trap was found recently in the school’s Second Court building which was built between 1598 and 1602. Workers were removing panels to do electrical work in the Senior Combination Room – a multi-purpose room where teachers and staff members meet and relax – when they found a single man’s shoe. It appeared to be about 300 years old and would have been a size 6 by today’s measurements. The shoe was also in very good shape except for a hole in the sole. Why did the workers immediately recoil in fright from what they called a spirit trap?

It was positioned between the chimney breast and the window, which is exactly the sort of location where you would expect to find a shoe being used in this way. 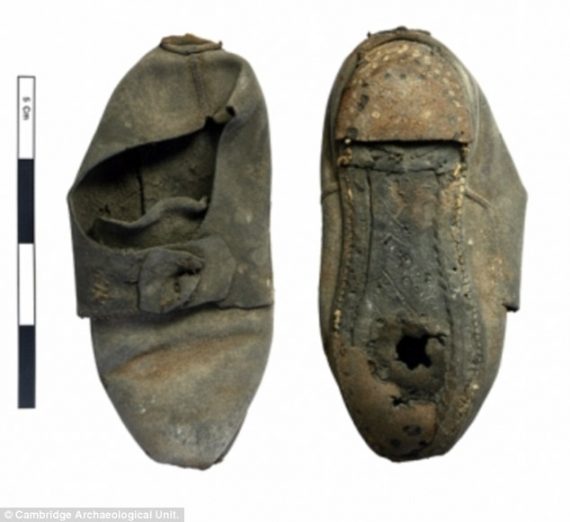 Richard Newman was brought in from the Archaeological Unit of St. John's College and concluded the shoe had been placed there to catch evil spirits, demons and witches and hold them forever … or at least until next semester when they became someone else’s problem. He says this was a common belief in 17th and 18th century England. Newman was pretty excited about the shoe.

These discoveries are important because they give us a material record of what people may have believed at the time. There is not a lot of documentary evidence about people's beliefs in ritual magic in the past, and often the sources that we have are very negative and disparaging about such practices.

That’s not surprising. Besides shoes, people in this period also protected their houses and dorm rooms with dead cats, horse skulls and so-called 'witch bottles' which contained hair and urine from the current resident or owner. And you thought YOUR dorm room smelled bad.

Of course, no one believes in spirit traps and witch bottles anymore … do they? After Newman finishes studying the shoe to get an accurate determination of its age, he plans to place it back in the wall before the workers replace the panels …

… out of respect for the wishes of earlier residents.

Why mess with success? After all, the shoe has protected the room from 300 years of college students.

The Strange Relationship Between Fish Urine And The Sea