The world of Forteana and cryptozoology is indeed littered with many cases that are hard to really classify. It is sometimes a challenge to decide if something is a mystery animal, something more supernatural in nature, a mysterious unsolved phenomenon, or just plain weird urban legend. Indeed, some cases drip with so much bizarreness that they practically sit in a designation all of their own, teetering on a ledge between our reality and, well, something else. These are the accounts and tales that are just so strange as to defy any clear, rational answer, and any regular reader here knows I love to make a visit to these far out cases from time to time. They are simply irresistible to me with their sheer, flat-out absurdity. Well, here I am with another such case, this time in the form of a bipedal thing with the face of a pig that seems to crave meat and terrorizing people. It is a case that, while seeming very much to be urban legend, nevertheless is a rather odd and intriguing saga that is worth taking a look at.

The rural countryside of Northfield, Vermont seems like a rather quiet, tranquil place at first glance. Here the rolling countryside is peppered with quaint woodlands and hamlets, something almost from a fairy tale storybook. Yet, starting from 1971 something very bizarre and very frightening began to be spotted lurking in the dark recesses of the area, especially in a region ominously referred to as The Devil’s Washbowl, something those who saw it could not explain, and which would go on to be known as the Pigman. One of the first reported incidents of an encounter with the extremely weird creature occurred one night on a farm on the outskirts of town. In this case, the farmer claims to have heard a series of strange, guttural sounds coming from out in his darkened backyard. The farmer then purportedly turned on the outside lights and gazed into the shadowy murk outside, expecting to see maybe a stray cat or dog, maybe even a raccoon rooting through his trash, and it was then that he claims he saw something very bizarre indeed. 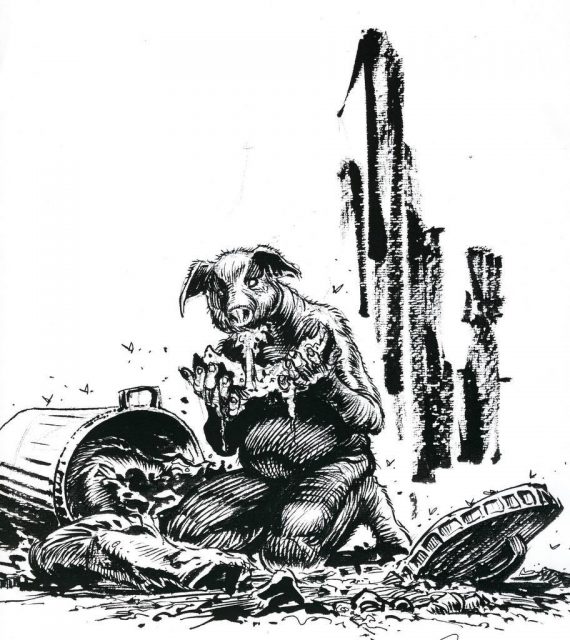 The farmer said that he saw a large, humanoid creature that was rummaging through some garbage only to rear up on its legs and skulk about on the edges of the outside lights. Nevertheless, it was visible enough for the farmer to describe it as looking like a naked, muscular man covered in thin, white hair, hands that seemed to end in claws, and with a snouted face that looked like that of a pig. The creature was said to stand there for a moment chuffing and staring with its beady eyes before scurrying off into the darkness beyond the lights while issuing a bloodcurdling squealing noise.

Not long after this, another report of apparently the same bizarre creature would be told by a group of terrified high school students. The kids had apparently been at a dance and had stolen away to go out into the woods to a gravel pit out there, a popular hangout spot which they called “the sandpit,” and have some clandestine beers. As they were out there, they claimed to have heard something moving about in the dark and when they looked to the sandpit they could see a man-like figure hunched over busy at work on some unknown chore. At first that was all they thought it was, a man, but then it had stood up and they could see that it was tall, muscular, covered in white hair, and startlingly had the face of a pig. The hideous creature had apparently been feeding on a dead animal and its face had been smeared with blood. It reportedly stared at them for a moment before walking off on two legs out into the wilderness. The frightened teens went to go tell others, and some even came out to investigate, but all they could find was tall grass and underbrush that seemed to have been trampled by something large and powerful.

These two reports seem to mark the beginning of the Pigman phenomenon in the area, and the whole thing quickly took off to take on the air of almost an urban legend. Motorists driving along at night in the Devil’s Washbowl area sometimes claimed to have seen the same creature dart across the road or even threaten their vehicles, and teens who went out into the secluded places here for some alone-time claimed to have been harassed by a pig faced creature with claws and a body covered in white hair. In one such incident, a boy reportedly went out to relieve himself while his girlfriend waited in the car, and claimed that a large pig-faced creature had lurched forth to push him against the vehicle with enough force that the car rocked. The couple’s screams apparently drove the thing off and they were able to escape. Later, the boy would notice that there were nasty scratches on his chest. He described the beast as being 8-10 feet high, covered with white hair, and with very long, wicked claws on its hands. The face was similar to descriptions in other reports; the visage of a pig, twisted with vehemence and anger. 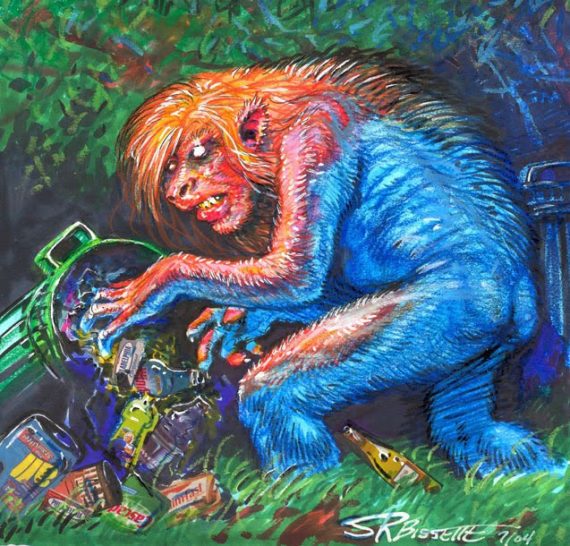 On another occasion, a group of teens claimed that they had been hiking through the woods when they were pelted with branches, sticks, and rocks, all while a strange squealing noise reverberated through the night. Other stories concerning the incredibly bizarre beast were a little more eery. One local man by the name of Jeff Hatch purportedly was out with his friends in the woods looking for any sign of the creature when they came across a cave filled with partially gnawed animal bones, as well as what seemed to be bedding made of hay, and when they examined the ground they could see it was peppered with strange, cloven tracks. Most of the bones seemed to have been from cats. Another report came in at around the same time of more such bones found near a pig farm in the vicinity. Around this time there were several other reports of people coming across dead animals that seemed to have been mutilated or torn apart, as if by hand, and with their entrails missing.

Other ominous stories popped up too. In one incident, a group of teens went out in the woods to go camping, and ended up setting up camp in some caves for the night. In one of the caves, a couple was settling down for the night when the Pigman is said to have come boldly charging in. The boyfriend apparently shouted at the vile thing, after which it had picked up a large rock and tossed it at him to knock him unconscious. The abomination then supposedly picked up the knocked out boy to sling him over its shoulder and stalk out into the night. Authorities were called in and a search commenced, but supposedly nothing was found of the boy who had been carried off. Purportedly, some scraps of clothing were found scattered around an abandoned farmhouse one town over, but that was it. The boy was gone without any other trace. One witness came forward some time after to say that he had heard something rummaging through his trash one night and had gone out to investigate. He claimed to have seen the missing boy himself hunched over the trash, but that he had seemed to be covered in white hair and had a feral, glazed over look in his eyes. It is hard to know just what to make of this one.

The whole Pigman phenomenon became somewhat of a legend in the area, and of course it was only a matter of time before a fittingly bizarre origin story was assigned to it. Paranormal researcher Joseph A. Citro, who has spent a lot of effort tracking down stories and potential evidence for the Pigman of Vermont, uncovered one tale from locals that seems to provide a starting point for the encounters. The story goes that there was once a 17-year-old boy named Sam Harris, who on the night before Halloween in 1951 had set out to play pranks on a night called "Picket Night" in the area. At the time, Picket Night was sort of a tradition among teens in the area every October 30th, during which they fanned out to play practical jokes and cause mischief. Sam apparently had set out with eggs and toilet paper planning for some good natured pranks, but never returned. A search was launched to try and find the missing boy, but no trace of him was ever found. 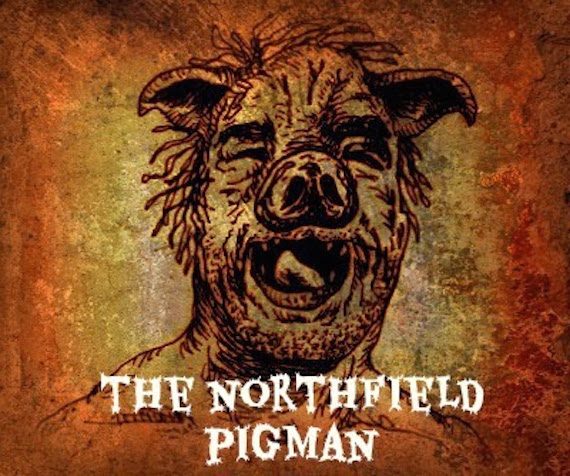 The rumor is that Sam Harris had somehow given himself over to the Devil, or had been possessed by some demonic force out in those dark woods, and that it was he who eventually became the Pigman. It was said that, either through madness or demonic forces, he had taken to slaughtering pigs, eating their entrails, and wearing their hollowed out heads over his own. The creature that everyone said they saw was said to be Sam Harris, now something other than human and still out causing mischief and mayhem. Adding to the mystique of this whole creepy tale are some of the reports that came in at the time. One was the rather dramatic story that a local journalist who had dismissed the rumors was found dead with the words “Picket Night” carved upon her skull. In another report, Sam’s own mother claimed that one night her son had come back to their home out of nowhere to drag a sack of pig entrails across their porch in a bloody, slimy line, all the while squealing like a pig in glee. Some versions of this macabre story maintain that the mother not long after committed suicide by flinging herself into a nearby pigpen and letting the pigs devour her alive.

This all certainly smacks of pure scary urban legend, but the thing is that to this day the Pigman is still allegedly spotted from time to time. The legend is so persistent that the television series Monsters and Mysteries in America went about investigating the whole phenomenon in 2015. Although they did not find any hard evidence of such a creature, there are certainly plenty of spooky stories to go around in the episode. It would be easy to dismiss the whole case of the Pigman as mere folklore, but the reports still keep coming in enough that there are still those interested in pursuing it. So what is behind the bizarre saga of the Pigman of Vermont? What are we looking at here? Is this just another creepy yarn that has sprung up in a rural area and been given an added dimension of spookiness by the sinister name "Devil's Washbowl"? Is this a case of a vehement ghost out to terrorize people? Is it just someone in a pig mask messing around or even a cryptid of a most bizarre nature? No one really knows, and the tale of the Pigman remains one of the stranger, harder to classify, and indeed more entertaining stories out there.