For all the talk about them sucking everything within their giant gravitational grasp into their dark abyss, the one comforting consolation about black holes was that at least they’re too far away to do any damage to us. Not anymore. A new study suggests that deadly gamma ray bursts from a black hole can travel for thousands of light years at the speed of light while maintaining their ozone-destroying and life-decimating power. Uh-oh.

The study is presented in a deceptively cartoonish way in an animation video by the German youtube channel and design studio Kurzgesagt. In a nutshell (Kurzgesagt is German for “in a nutshell”), the video warns about gamma rays – those electromagnetic waves filled with gamma ray photons each containing the power of a million visible light photons. Black holes suck in energy from other stars within a 100-million-light-yyear radius (that’s a lot of star energy) and turn it into gamma ray bursts. “Bursts” is a nice passive word better used to describe squirt guns – it’s the wrong description for these so-called “death rays from space.” 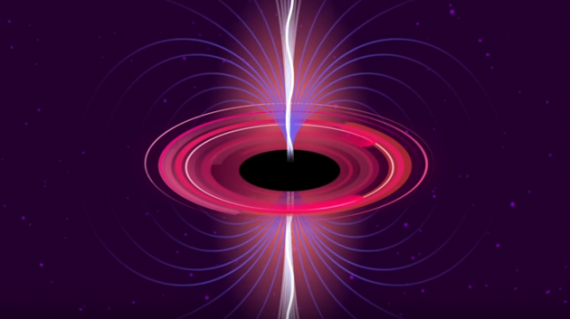 There are two kinds of gamma rays and neither is safe to stand in front of. Short bursts – lasting a second – emanate from two neuron stars in a binary system colliding, while long bursts of up to a minute come from the more traditional collapse of a dying supernova.

Wait a long burst minute, you savvy science fans say. Doesn’t the Earth’s ozone layer block gamma rays? Sure it does – but only those piddly little rays from our non-black-hole sun. The ozone would be cooked instantly by a real gamma ray burst – just before life as we know it got cooked away too, at least on that side of the planet. Since they’re invisible, we wouldn’t see it coming nor would we have enough time to hide under a solar blanket – like that would work. This destructive power of black hole gamma rays is one theory given for why we’re having a hard time finding other signs of life in the universe – maybe they’ve all been gamma bursted.

Is there any good news? A little. To wreak havoc on Earth, a gamma ray burst would have to make a near-direct hit and come from somewhere close in the Milky Way. While NASA's Fermi Gamma-ray Space Telescope. detects a gamma burst every day, none have originated from our galaxy … so far.

Scary news from a clever cartoon but you’re still more likely to choke on a nutshell than fry in a gamma ray burst.

You Are Being Spied On Through Your Phone’s Battery