Capybaras Are Getting Ready to Take Over Florida

Does any state in the U.S. have as many problems – self-inflicted or otherwise – as Florida? Get ready to add another big one to its list. A Florida biologist is warning that capybaras – the world’s largest rodents – are thriving in Northern Florida and getting ready to move anyplace where there’s vegetation. Should somebody warn Mickey that there’s a new rodent in town and this state isn’t big enough for the both of them?

“Capybaras have been introduced to northern Florida [and] several sightings suggest they have been breeding.

Congdon and a team of students conducted a census and found at least 50 capybara roaming around in northern Florida. Fifty? That doesn’t sound so bad, does it? Let’s take a closer look.

The capybara (Hydrochoerus hydrochaeris) is native to South America and lives in groups of 100 in dense forests and savannahs near bodies of water. So the fifty in Florida are just getting acclimated to the home-like environment. They can grow to 4.4 feet in length, 2 feet in height and weigh up to 146 pounds with the record held by a female from Brazil weighing 201 pounds. (Wasn’t she the shot-putter on their Olympic team?) Oh, and they breed fast and can have litters of up to 8 pups. Sounds like an explosion of capybaras is not far off. 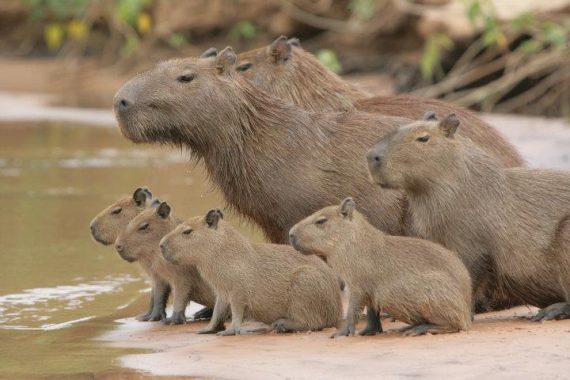 Wait a minute. This is Florida, a state that doesn’t take too kindly to immigrants and residents who are different. Won’t the capybaras be eliminated naturally? Well, their only natural enemies are pumas (pretty rare in Florida) and anacondas (another invasive species on the rise in Florida, but who wants to deal with 26-foot snakes chasing 140-pound rats?). In South America, capybaras are hunted and farmed for fur and food, but we know how well fur coats and nutria steaks are doing in the U.S. (not well on either count).

Wildlife officials in Florida want to keep the state's population from panicking so they say there’s only a few capybaras and they may or may not be breeding (they’re rats – how can they not be breeding?). Congden wants to keep her job in capybara research, so she asks for patience.

They might be able to make a go of it in the United States. We want to keep them from spreading, but can we please not kill them all so I can study them?

A pitiful plea like that will only hold people off until – like at the Rio Olympics – the first Florida golfer sees a capybara knocking his ball into a water hazard.