The Siberian Times reports that researchers from the Virology and Biotechnology Center in Novosibirsk have been dispatched to Salekhard, a town in Yamalo-Nenets Autonomous Okrug on the Arctic Circle to investigate cemeteries suffering from such serious erosion that graves are opening and dead bodies are being exposed … bodies whose bones show the telltale sores of smallpox infection.

According to Boris Kershengolts, deputy director for research at the Institute for Biological Problems of Cryolithozone, the area was hit by a major smallpox epidemic in the 1890s which killed at least 40 percent of the townspeople. Victims were buried in the upper layer of permafrost on the bank of the Kolyma River. Unfortunately, the recent combination of melting permafrost and flooding has caused the Kolyma’s bank to erode and open up the graves.

Initial reports on preliminary analysis of the bones say that only fragments of smallpox DNA have been found in the graves, not actual surviving smallpox viruses. However, this is not the first time smallpox fragments have been found in melting areas of Siberia – stories of smallpox victims in thawing graveyards date back to 1993 and mummies of smallpox victims were allegedly unearthed in 2002. Throw in the fact that smallpox vaccinations have stopped since the disease was eradicated from the wild in 1980 and you’ve got the potential for another epidemic disaster. 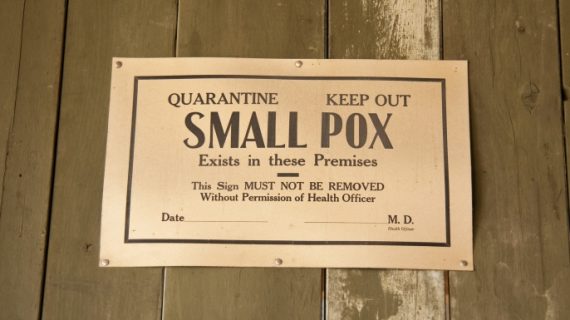 Microbiologist Sergey Netesov from Novosibirsk State University says people should stay away from fenced-off graveyards and burial sites where smallpox and anthrax victims may have been uncovered, but the real danger spots are areas where money is more important than health concerns -- mines and oil fields.

It is a recipe for disaster. If you start having industrial exploration, people will start to move around the deep permafrost layers. Through mining and drilling, those old layers will be penetrated and this is where the danger is coming from. If it is true that these viruses survive in the same way those amoeba viruses survive, then smallpox is not eradicated from the planet - only the surface.

Has the story of smallpox gone a full circle? Nestov found fragments of smallpox in animals killed in the 1890 epidemic and investigated a case in the 1990s when a Siberian milkmaid caught what appeared to be cowpox from cattle.

And since people are not vaccinated anymore, it is possible, as was once the case, that there will be a new transition of the virus from animals to humans. This probability is non-zero. Once it has been happened in history, it may happen again.

Dr. Donald A. Henderson, a leader in the eradication of smallpox, died just last week. Who will take his place? Do we need a doctor, a microbiologist, a climate change specialist or someone with the power to stop mining and energy companies?