There is a long-standing mystery about the Linville Gorge Wilderness of Western North Carolina, and the nearby Brown Mountain ridge where, for decades, the appearance of odd lights have been reported.

Known as the Brown Mountain Lights, I have written articles on the subject a number of times here at Mysterious Universe, a few of which can be seen here. Living within about an hour's drive from the area in question, I have also visited Brown Mountain and the adjacent Linville Gorge countless times over the years, and have shared discussions with a number of independent researchers, as well as locals that have described their own observations to me.

As a result of this active interest in the phenomenon, I've become acquainted with most of the literature about them, in addition to having seen a number of interesting photos of the purported phenomenon. However, one image that turned up recently had not only managed to stay off my radar, but came to my attention under rather unexpected circumstances. It was a photograph taken by Jim Baity, a writer for the Asheville Citizen Times, which appeared on the front page of the paper's Sunday, July 16, 1962 edition. 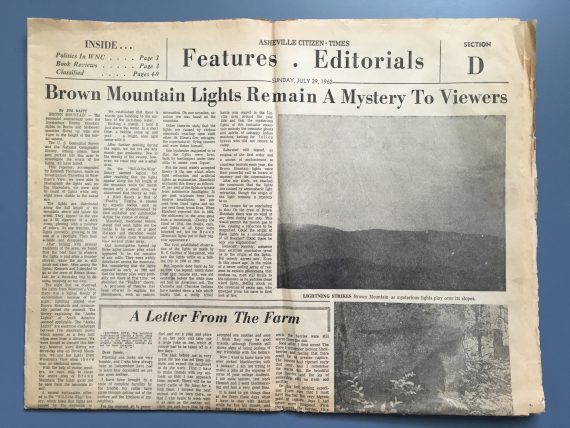 Where I found this little "lost treasure", however, is another story entirely.

Earlier this year, my grandfather William Keys passed away on the morning of his 101st birthday. William was an interesting man, and was equally meticulous; he kept records on virtually everything, from notes on aircraft used in both of the World Wars, to the Prussian helmets he restored and preserved as a hobby (one of these, according to my uncle, now resides with the collections at the Louvre in Paris). A dental technician by trade, he operated a private lab here in Asheville for decades. However, his private interest had been the history of the Second World War, and despite being only an amateur, his knowledge of the great battles of the war were on par with many great professional historians today (I am glad to say that a number of his books on this subject are now kept in my personal collection, as well).

My grandfather had other interests too, it seems, which he spoke of less often. During our many conversations about World War II, I would often ask about "Foo Fighters", or the reports of "ghost rockets" over Scandinavia in the years after the war. Generally, these were not subjects that he expressed having much interest in, although there were occasions where he speculated about such things as the infamous Die Glocke, or "the Bell", an alleged dome or bell-shaped object Germany may have been constructing toward the end of the war, which has figured prominently into a number of Nazi UFO conspiracy theories over the years. Any knowledge he had about this subject seems to have come from modern sources, however, which include various television documentaries that dealt with the subject.

Hence, while I had always hoped to learn of any "secret notes" or other literature my grandfather might have kept about such unusual subjects, there seemed to be very little of this sort of information in his archives. Granted, his office was filled with books, but all of them dealing strictly with the specifics of naval battleships, aircraft, weaponry, helmets, and the lives of various individuals who figured prominently into the narratives underlying the two World Wars.

Since his passing, my family has spent the last several months going through the home, and removing various things ranging from furniture and kitchenware, to old lab equipment from his years in the dental business. And, of course, there were his troves of old books on military history, some of which my mother had advised I might want to come look at. I recently made arrangements to do this, and spent an entire morning there at the old house, combing through his various books and archives.

In addition to his World War II book collection, there were old copies of Life Magazine dating back to the early 1940s, along with other periodicals and newspapers. As I was busy looking through his trove of old books, my mother and aunt joined me there in his office, and began looking through various newspapers and clippings he had stored in a small box.

Initially, my mother seemed perplexed by why my grandfather had kept a number of these old newspapers, turning instantly to the obituaries sections in each, to see if there had been family members that had passed away coinciding with these issues. However, to the contrary, it seemed that recurring similarities between the small collection of newspapers had been the subjects of the headlines themselves, rather than having to do with family members and the like. These stories often were featured on the front pages, which involved unusual news stories about our region from over the years.

For instance, one had been written by Mrs. H. Grady Bailey, a Citizen-Times correspondent, titled, "Fairy Ring Wonder to See." Another read, "It Was Time of Prophecy And of Strange Happenings," penned by John Parris, a writer whose collected stories about the region were eventually published in several collections. I knew of these because of an article I tracked down that Parris had written, which involved a legendary creature called the "Boojum", a sort of Western North Carolina variant on the modern stories of Bigfoot in America.

Then, of course, was the front page story from 1962, as pictured earlier in this article, on the Brown Mountain Lights; arguably the most interesting of the stories in my grandfather's collection. The photo accompanying the article (featured at the top of this post) was one I had never seen before; indeed, it seemed that my grandfather had kept more of an interest in these sorts of things than I had ever realized!

Baity's photo appears a bit similar to another photo from around the same era that I managed to find, credited to photographer Bruce Roberts (as seen below), the husband of author Nancy Roberts, who wrote collections of ghost stories about the American Southeast:

The Roberts photo is an interesting one, since unlike the image from 1962 taken by Jim Baity, it appears to show the lights being distinctly visible above the ridge line. This is consistent with a number of eyewitness reports where the lights, rather than merely appearing against the backdrop of the mountainside, appear to rise above it, and can be seen moving upward, often lifting above the horizon. One such report, shared with me years ago by a man named Gary Ball, occurred with a group of atmospheric science students from nearby Appalachian State University. The students were gathered at the 181 overlook near mile marker 20, where a large gravel pull off exists; this has remained one of the most popular locales for observing the lights over the years. From this vantage, the students watched dozens of amber yellow globes of light lifting off the mountain, which rose to a certain altitude before they would seemingly level off, and drift toward the north. When asked about the weather conditions on that occasion, Gary told me that the observation had occurred during a drizzling rain that lasted several hours that particular evening.

In the photo by Baity from 1962, while it is unclear whether rain was present, one can distinctly see lightning in the upper left portion of the photo. Might this present a clue, suggesting that, as has long been supposed by researchers who study the lights, the lights are a form of natural phenomenon akin to ball lightning?

It seems that the verdict is still out on the Brown Mountain Lights, their strange nature, and mysterious cause. With time, and persistence, perhaps there will be better examples that document the mystery in the years to come, which will bring us closer to making some more conclusive determinations about what, precisely, is going on down there in the Linville Gorge wilderness.

NASA is Shutting Down Live ISS Video Feed For Good