Actress and singer Demi Lovato got her start in show business on the television show Barney & Friends. Could that experience have anything to so with her beliefs in UFOs and mermaids? Is Barney an alien?

Lovato revealed in an interview for the September issue of Elle Canada that she saw a worm UFO a few years ago.

I was walking outside and I looked up and it almost was like there was a worm in the sky. It was changing shapes and moving all over the place. 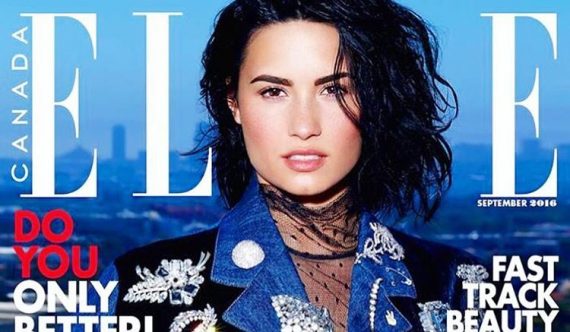 Lovato added that she believes in aliens (although she gave no indication she thinks Barney is one) so it’s assumed she thinks what she saw was a spaceship. Could this mean that her song “Neon Lights” was about aliens or alien abduction?

Baby, when they look up at the sky
We'll be shootin' stars just passin' by
You'll be comin' home with me tonight
We'll be burnin' up like neon lights

This is the second time Lovato has publicly acknowledged her belief in aliens. In June 2014, she appeared on Late Night With Seth Meyers and said this:

I know that [aliens are] real. How self-centered would we be as humans to believe that we are the only living things in the universe?

While Seth didn’t ask Demi if Barney is an ET, she did say she thought mermaids are aliens.

You know Atlantis, how there was that underground city? I believe that there could possibly be mermaids, which is actually an alien species that lives in parts of the Indian Ocean, which we have never explored before. And Christopher Columbus has actually seen three mermaids on his way to America.

It should come as no surprise that a former Disney star believes in mermaids, but she also admitted that she had just watched a documentary on them and thinks there’s a conspiracy to cover up their existence.

Let’s see. Demi Lovato saw a worm UFO. Demi Lovato appeared on Barney & Friends. Barney’s song is an ear worm. Barney Hill was abducted by aliens. Demi Lovato was a Disney actress. Neon Lights sounds like it's about aliens and Demi is in water in the video like a mermaid. Disney makes mermaid movies. Demi believes in mermaids and thinks they’re aliens.

That’s enough to convince me Barney is an alien. If they’re listening, will his species please come and take him home?

New Telescope to Search for Life Around Alpha Centauri