Did an 1890s Hoax Foreshadow Livestock Mutilations of the Coming Decades?

I am irrevocably fond of books, particularly old ones, or those dealing with odd and offbeat subjects. Thus my desire recently to go flipping through an old and entertaining classic, John Keel's The Complete Guide to Mysterious Beings, a 1994 update to a 1970 Fawcett Publications release, originally titled Strange Creatures from Time and Space.

The book's thirteenth chapter has an alluring title: "Cattle Rustlers From the Skies", an obvious reference to the phenomenon of animal mutilations, particularly those of cattle, which became prevalent in America during the 1970s and 80s. However, the lead-off to the chapter revisits a curious -- albeit amusing -- bit of Americana, of which Keel wrote the following:

"In 1897 a farmer named Alexander Hamilton signed an affidavit swearing that he and his family had seen an illuminated "dirigible," occupied by very strange-looking beings, carry off one of his heifers. The animal's hide was said to have been found in a nearby field the next day."

I recalled having come across this particularly odd story a few times myself, a story whose unusual twists did seem to foreshadow the "cattle mutilation" phenomenon of the century that followed. Granted, there isn't a shred of truth to it, which, in all honesty, makes it all the more interesting in terms of its apparent prescient qualities. 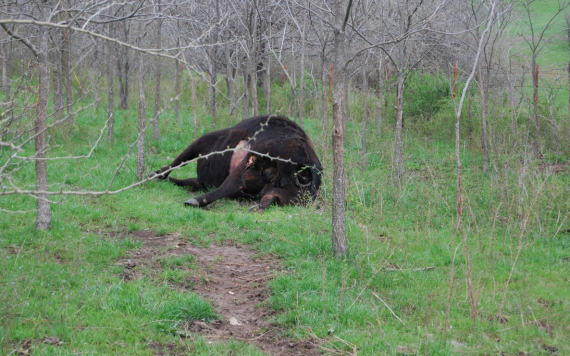 Keel hadn't bought it either, we should note. "This story has been written up in almost every UFO book on the shelf," he wrote. "Unfortunately, it has proven to be a hoax, something Mr. Hamilton contrived to entertain the local Liars' Club (such clubs were once a popular rural diversion)."

Indeed, this was a popular practice back in "the good ol' days", and such groups would make it frequent practice to see who among their ranks could cook up the most bizarre tales, and somehow get their stories published in the daily newspapers of the period (even American author Mark Twain had written his fair share of hoaxes during his time as a newspaperman, one of which stands out among the rest, remembered today as the "Empire City Massacre").

However, the story of farmer Alexander Hamilton (was this name a nod to former U.S. President George Washington's chief of staff, killed in a duel by Aaron Burr?) was unique, in the sense that it went so far as to present an affidavit, bearing the signatures of multiple parties that included law enforcement and local government agents, all of whom spoke to the veracity of Jackson's claims and general character.

The entire sordid tale was sent to print as follows:

Last Monday night, about 10:30 said Alexander Hamilton, we were awakened by a noise among the cattle. I arose, thinking that perhaps my bulldog was performing some of his pranks, but upon going to the door saw to my utter astonishment an airship slowly descending upon my cow lot, about forty rods from the house.

Calling my tenant, Gid Heslip, and my son Wall, we seized some axes and ran to the corral. Meanwhile, the ship had been gently descending until it was not more than thirty feet above the ground, and we came within fifty yards of it.

It consisted of a great cigar-shaped portion, possibly three hundred feet long, with a carriage underneath. The carriage was made of glass or some other transparent substance alternating with a narrow strip of some material. It was brilliantly lighted within and everything was plainly visible—it was occupied by six of the strangest beings I ever saw. They were jabbering together, but we could not understand a word they said.

Every part of the vessel which was not transparent was of a dark reddish color. We stood mute with wonder and fright, when some noise attracted their attention and they turned a light directly upon us. Immediately on catching sight of us they turned on some unknown power, and a great turbine wheel, about thirty feet in diameter, which was slowly revolving below the craft began to buzz and the vessel rose lightly as a bird. When about three hundred feet above us it seemed to pause and hover directly over a two-year-old heifer, which was bawling and jumping, apparently fast in the fence. Going to her, we found a cable about a half-inch in thickness made of some red material, fastened in a slip knot around her neck, one end passing up to the vessel, and the heifer tangled in the wire fence.

We tried to get it off but could not, so we cut the wire loose and stood in amazement to see the ship, heifer and all, rise slowly, disappearing in the northwest. We went home, but I was so frightened I could not sleep. Rising early Tuesday, I started out by horse, hoping to find some trace of my cow. This I failed to do, but coming back in the evening found that Link Thomas, about three or four miles west of Le Roy, had found the hide, legs and head in his field that day. He, thinking someone had butchered a stolen beast, had brought the hide to town for identification, but was greatly mystified in not being able to find any tracks in the soft ground. After identifying the hide by my brand, I went home. But every time I would drop to sleep I would see the cursed thing, with its big lights and hideous people. I don't know whether they are devils or angels, or what; but we all saw them, and my whole family saw the ship, and I don't want any more to do with them.

Hamilton has long been a resident of Kansas and is known all over Woodson, Alien, Coffey and Anderson counties. He was a member of the House of Representatives. He staked his sacred honor upon the truth of his story.

As there are now, always have been and always will be skeptics and unbelievers whenever the truth of anything bordering the improbable is presented, and knowing that some ignorant or suspicious people will doubt the truthfulness of the above statement, now, therefore, we, the undersigned, do hereby make the following affidavit:

That we have known Alexander Hamilton for one to thirty years, and that for the truth and veracity we have never heard his word questioned, and that we do verily believe his statement to be true and correct.

Subscribed and sworn before me this 21st day of April, 1897.

This story sounds rather absurd, and of course was designed with just such a purpose in mind. Yet it does bear an undeniable similarity to stories that would emerge later, as it relates to such things as animal mutilations, and their long-suspected association with unexplained aerial phenomena.

A number of possible threads could be explored here. One important question is whether this story, one that was widely circulated in UFO literature (as Keel noted), might have firmly planted the "meme" of cattle abduction by UFOs into the minds of UFO researchers and enthusiasts early on. The result could have been, in decades that would follow where the very real mutilation phenomena began to occur, that an apparent correlation between the livestock killings and UFO sightings would begin to emerge when, in fact, there may have been underlying causes of a different nature. 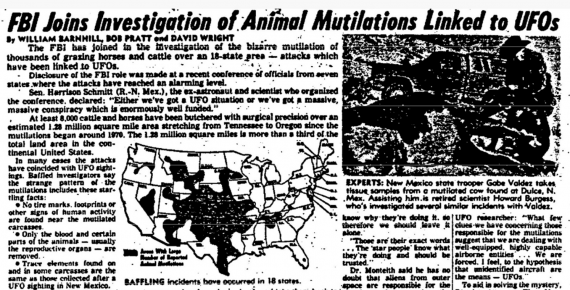 Researcher Chris O'Brien's book Stalking the Herd: Unraveling the Cattle Mutilation Mystery explores some of the alternative interpretations of the cattle mutilation mystery, as it relates to things which fall outside the camp of "prosaic explanations", without entirely abandoning the notion that there are acting agents underlying such livestock deaths. This is in contrast to conventional explanations which, at times rather laughably, seek to dismiss the complexities inherent within the mutilations as such things as natural deaths, predation, parasites, or contraction due to dehydration (an explanation that has been offered in relation to the curious removal of lips, tongues, and various soft organs on the deceased animals).

Whatever the actual causes underlying these livestock deaths, they are occasionally still reported today, and appear to have maintained their link to UFOs over the years... even if only in the minds of the UFO research community. Thus, it is interesting to consider the possibility, at very least, that the idea may have had earlier origins, with ties to hijinks of a local "liar's club" and an elaborate prank that managed to make its way to the local printing press.

Fear and Loathing in Loveland: A Farewell to the Famous Frogman of Ohio