Did George Adamski’s ‘Flying Saucer’ Make an Appearance Over Poland?

Throughout the 1950s, as a sort of "flying saucer craze" erupted throughout the United States and other parts of the world, one man claimed not only to have seen the craft, but to have met and spoken with their occupants.

George Adamski was an odd character in the early history of UFOlogy. His friends and followers often called him "Professor" (despite the fact that Adamski had no degree) at the meetings and lectures he would host at his restaurant, the Palomar Gardens Cafe, near his home. Although Adamski would claim to have seen, and even photograph UFO "motherships" as early as 1946, he wouldn't begin officially lecturing on the subject of flying saucers until 1949, in the years following Kenneth Arnold's famous sighting over Mount Rainier, Washington, and the alleged crash of a flying disc near Roswell, New Mexico a few weeks later.

In addition to claims of "contact" that Adamski would begin having with the alleged occupants of these saucers, the restauranteur would also begin to produce short films depicting odd-shaped objects dancing about in the sky overhead (some of Adamski's original UFO films can be seen here). Among the various photos and videos of Adamski's UFOs, one particular style has remained iconic throughout the years: an odd craft resembling an upturned saucer with a dome on top, and three orbs or other protrusions situated beneath the craft, widely discussed as being "landing struts" or some other functional element of the alleged aircraft.

This particular "model" of flying saucer has appeared in various media throughout the years, associated with everything from Nazi UFO conspiracy theories, to artistic renderings depicting famous close encounters with landed UFOs. However, one recent description of a UFO that was allegedly seen by a police officer in Poland also sounds remarkably similar to the famous Adamski craft (which we'll discuss a bit more later on).

A recent article appearing in the Mirror retells a unique incident, described by Polish writer Piotr Cielebiaś, as translated by researcher Philip Mantle. The details of the account, in which a flying saucer-esque UFO was said to have followed a police officer while on duty, can be read here. However, all that concerns us at the moment is the description the author gave of this object, which appears as follows:

“The UFO was in shape of a disc, with a kind of small ‘dome’ on the top.

“It was emitting blinding, yellow light (occasionally turning orange). At the bottom, three smaller white-bluish ‘balls’ could be seen.

A saucer, topped with a dome, and fitted with three smaller, white-bluish "balls" underneath... sound familiar?

Let's return again to December 13, 1952, at the height of the flying saucer craze in America. What is arguably the most famous photograph of Adamski's saucer, said to have been the scout ship of a Venusian alien named Orthon, was taken by Adamski on this date; he claimed the photo was captured through his telescope, and shows the supposed Venusian ship in remarkable detail. 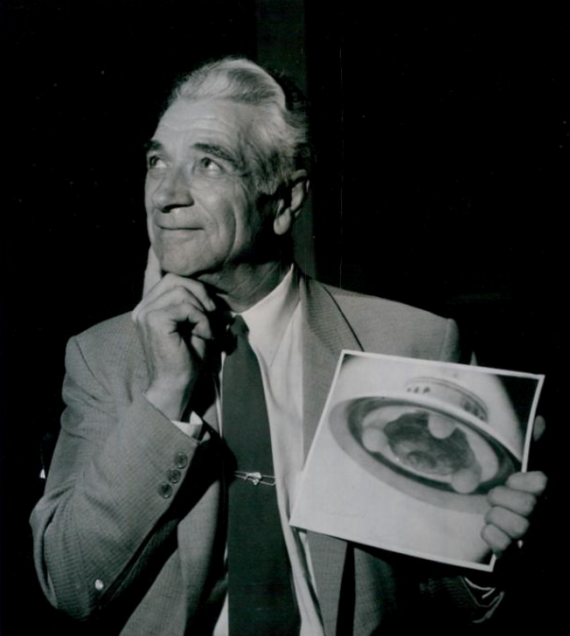 At the time, various segments of the public, many of them hungry for confirmation of alien life elsewhere in our solar system, found Adamski's photo intriguing; with little doubt, many probably considered the photo genuine (as some today still do, in fact).

Not everyone took Adamski's photographic "evidence" at face value, though. A subsequent analysis by German scientist Walther Johannes Riedel suggested that the bulbous "landing struts" on the underside of the craft were, in fact, merely light bulbs... and that the entire thing was an obvious hoax.

Nonetheless, various popular renditions based on Adamski's original saucer have continued to appear over the decades since his photo initially emerged onto the UFO scene. It is interesting that, despite the rather bogus appearance of Adamski's purported saucers, very similar descriptions of UFOs in eyewitness encounters have also continued to surface over the years.

Can one presume that these sorts of sightings, and the retellings of the encounters that appear afterward, are perhaps "inspired" (if not, at very least, influenced after the fact) by popular renderings which have borrowed from Adamski's photos?

Was ‘Nessie’, the Famous Monster of Loch Ness, Recently Caught on Film?