Dog Days: The Morphing of the Mythical Chupacabra

For decades now, stories of a "mystery beast" with a penchant for blood have lingered in various parts of the Americas. Known as the "chupacabra" in the Latin American world, the monster is said to stalk various livestock, particularly goats (it's name translates to mean "goat sucker" in English), and exsanguinate its victims, leaving a bloodless corpse to be found by startled farmers the following morning.

The legend of the chupacabra has its beginnings in Puerto Rico during the middle 1990s, as researchers that included Georgé Martín began to collect reports of a strange, smallish humanoid to which livestock deaths had been attributed. Earlier reports from the 1970s, namely that of a strange "vampire" attacking animals near Moca, Puerto Rico, did bear a number of similarities to the modern chupacabra reports, as did similar livestock deaths associated with cattle mutilations in the United States.

However, the real chupacabra craze was brought along after popular depictions of the "beast" on television shows like Unsolved Mysteries and other prime time favorites of the era. At that time, the animal was depicted as a small humanoid, occasionally also bearing reptile-like traits, and sometimes having a set of frills or other protrusions running down its back.

Although less often reported today, there are occasionally news stories that appear which seem to nod to this "classic" depiction of the famous blood-sucker, such as this recent article in the Mirror, which discussed an alleged mystery humanoid filmed in Portugal. "Some have said it could be a Chupacabra," the report reads, "a legendary Central and South American goat sucker with its first sightings in Puerto Rico." 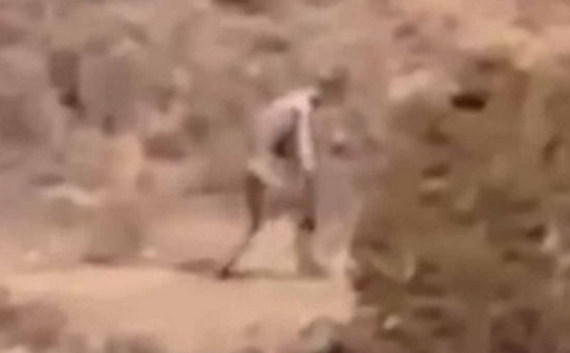 However, the problem with these chupacabra reports has less to do with whether a mystery creature actually exists. Instead, the problem seems to be that the animal, if such a creature exists, appears to have changed over time from an alien-esque humanoid, into something far more feral, and akin to a canine.

Consider the following report, which was submitted to me recently by one of the listeners of my Gralien Report Podcast:

As we passed it, me and my father both could not believe what we were witnessing. It had a long framed completely hairless body with a slender tail just as long if not longer. The eyes were a reddish orange with the head of a mix of a feline type creature and a bulldog or a canine of that nature. Due to it being directly on the side of the road we noticed that it had long canine teeth overlapping its bottom lip. While it watched our approaching car we could also see that its oddly shaped right paw or hand was raised up.

Reports in the southeastern United States began to associate chupacabra sightings with these strange, hairless doglike animals. However, unlike the monstrous little vampires in Puerto Rico, in a number of notable incidents these American variants have indeed been captured, and shown in a number of news reports, like the one featured below:

So at what point did the famous Puerto Rican goat suckers transmogrify into what look more like mangey dogs than anything startling and "alien"?

On the subject of mange, many wildlife experts actually do recognize these alleged "chupacabras" as being any number of animals that range from raccoons and foxes, to coyotes suffering from a condition called Sarcoptes scabiei, which causes severe skin irritation. This typically leads to hair loss on parts of the animal's body, due in part to incessant scratching of the affected areas.

As for the "creature" recently filmed in Portugal, the strange humanoid in question, variously compared to both the chupacabra as well as the legendary Bigfoot of North America (despite appearing completely hairless), is an obvious computer-rendered animation, a problem we see running rife with supposed UFO videos that populate various high-traffic YouTube accounts, which thus become easily monetized thanks to the traffic they receive.

So in an era of endless hoaxes and tomfoolery aimed at capturing gullible minds, is there really anything more to such legends of chupacabras, and if not, what are we to make of their alleged victims?

Perhaps there is something more to these mysteries after all. As noted earlier in this article, there have been a number of unexplained incidents that involve the deaths due to apparent bloodletting of various livestock. One notable incident, described by early researcher of the supernatural, Charles Fort, described such a case which dates all the way back to 1874 in Ireland:

For about four months, in the year 1874, beginning upon January 8th, a killer was abroad, in Ireland. In Land and Water, March 7, 1874, a correspondent writes that he had heard of depredations by a wolf, in Ireland, where the last native wolf had been killed in the year 1712. According to him, a killer was running wild, in Cavan, slaying as many as 30 sheep in one night. There is another account, in Land and Water, March 28. Here, a correspondent writes that, in Cavan, sheep had been killed in a way that led to the belief that the marauder was not a dog. This correspondent knew of 42 instances, in three townlands, in which sheep had been similarly killed—throats cut and blood sucked, but no flesh eaten. The footprints were like a dog's, but were long and narrow, and showed traces of strong claws. Then, in the issue of April 11th, of Land and Water, came the news that we have been expecting. The killer had been shot. It had been shot by Archdeacon Magenniss, at Lismoreville, and was only a large dog.

Despite the explanation of a large dog involved with these killings, the slashing of throats and subsequent sucking of blood is very unusual behavior for dogs, particularly coinciding with the reference to no flesh having been eaten. Fort also took issue with this explanation, summarizing the folly of this "pseudo explanation" as follows:

"This announcement ends the subject, in Land and Water. Almost anybody, anyway in the past, before suspiciousness against conventions had the development that it has today, reading these accounts down to the final one, would say—"Why, of course! It's the way these stories always end up. Nothing to them." But it is just the way these stories always end up that has kept me busy. Because of our experience with pseudo-endings of mysteries, or the mysterious shearing and bobbing and clipping of mysteries, I went more into this story that was said to be no longer mysterious. The large dog that was shot by the Archdeacon was sacrificed not in vain, if its story shut up the minds of readers of Land and Water, and if it be desirable somewhere to shut up minds upon this earth."

As far as the strange incidents involving exsanguination of livestock over the years, perhaps there is indeed more going on here after all; though whether that involves anything "doglike", let alone the original mystery beasts in Puerto Rico once associated with the Chupacabra, remains anyone's guess.

Could these mysteries simply be related to "odd" instances of animal behavior, perhaps fueled by cultural traditions involving vampirism? Or are there other causes, some of which may remain unexplained, that have helped form the mythos of the chupacabra in modern times?

Now We Have to Worry About Mini Black Holes Too