South Carolina, one of the original thirteen British colonies, was the first to ratify the original U.S. Constitution (the Articles of Confederation) in 1781, and was the first state to vote to leave the United States during the Civil War in 1860 (don’t worry, it came back). South Carolina is known for many other firsts for the U.S.: the first round of golf in the New World was played in Charleston, the first symphony orchestra was organized in the state, as was the first public college, and the first museum. Famous people born in South Carolina were U.S. President Andrew Jackson, the Godfather of Soul James Brown, comedian Chris Rock, and baseball great Shoeless Joe Jackson. It’s not a big state (fortieth largest), or the most populous (ranked twenty-third), but the geography consists of sandy beaches, marshes, the Piedmont Plateau, rivers, and lakes, so what it lacks in size it makes up for in beauty. The state has more than 683 square miles of lake surface, which makes it a perfect home for a lizard man. 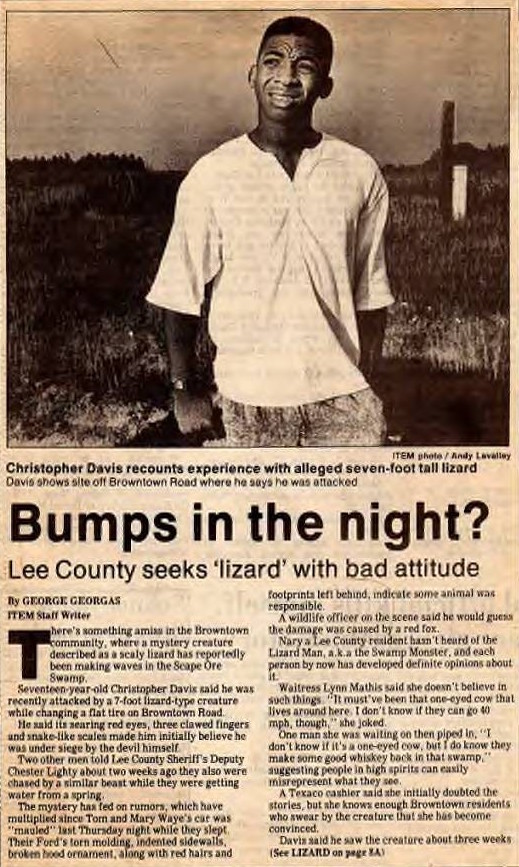 On 29 June 1988 at around 2 a.m., a tire on seventeen-year-old Christopher Davis’s car suffered a blow out. He pulled to the side of the road that ran along Scrape Ore Swamp to change the tire. As he finished the work, a thumping approached him from behind. When Davis turned toward the noise, he found a seven-foot-tall creature running toward him. He leapt into the car, and started to drive away, but not before he got a good look at it. The thick creature ran on two legs like a man. Black hair covered the monster along with patches of lizard skin on its three-toed hands and feet. The lizard man reached for the car, but missed as Davis swerved out of the way. It then launched itself onto the roof. Davis continued to swerve, trying to throw it off. When he arrived home he found the rearview mirror damaged, and scratch marks crisscrossed the roof of the car.

When Davis’ father took Chris to the Lee County Sheriff’s Office more than two weeks later to file a report, they discovered this wasn’t the only such case in the area.

On 14 July, sheriff’s deputies responded to the home of Tom and Mary Wave in a small community outside Bishopville, South Carolina, on a call of vehicular vandalism. Chrome was torn from the body of the car, as were the antenna, and hood ornament. Wires under the hood of the vehicle had been chewed on. Stranger yet, the car was covered with muddy footprints. It was then locals told the officers of many recent sightings in the Bishopville area of a seven-foot-tall monster with red eyes.

Lizard man encounters soon began to spring up all over the area, and officials attempted to track the creature, but all they found were large, three-toed footprints. Although rare, lizard man sightings continue to this day. 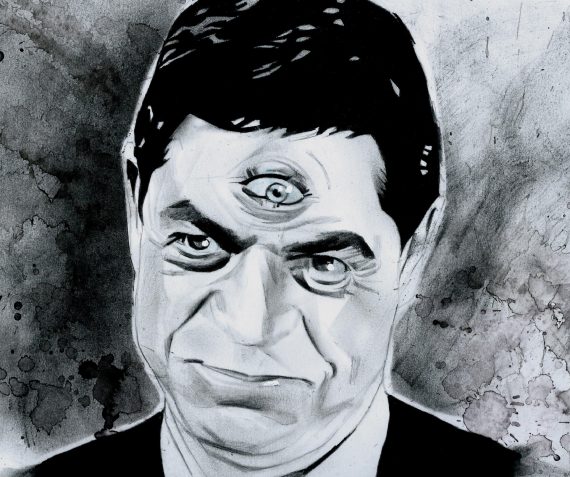 Two students wandering the University of South Carolina utility tunnels (dubbed “the Catacombs”) on 12 November 1949 witnessed something strange – a man wearing silver clothing. The man didn’t look at the students as he lifted up a manhole cover, and climbed into the hole. One of the students, Christopher Nichols, was a student reporter and wrote the story for the campus newspaper The Gamecock. In April that next year a campus officer making late night rounds found mutilated chickens, and a man in silver clothing hunched over them.

But the officer armed with a flashlight got a better look at the silver-clad figure than did the students. The man’s skin was “grey and grotesque,” and he had a third eye in the center of his forehead. The officer called for backup, but when the second policeman arrived, the Third Eye Man had escaped into the tunnel system.

The Third Eye Man became the stuff of legend around the Gamecock campus for more almost two decades before it became reality again. Fraternity brothers hazing pledges in the 1960s by taking them into the Catacombs for a fright, saw what looked like a crippled old man dressed in silver. When they approached him, the man struck them with a pipe, knocking one student to the floor of the tunnel before escaping.

A spokesman for the University of South Carolina told a reporter for the student newspaper there’s nothing in the service tunnels that shouldn’t be there but empty beer bottles. 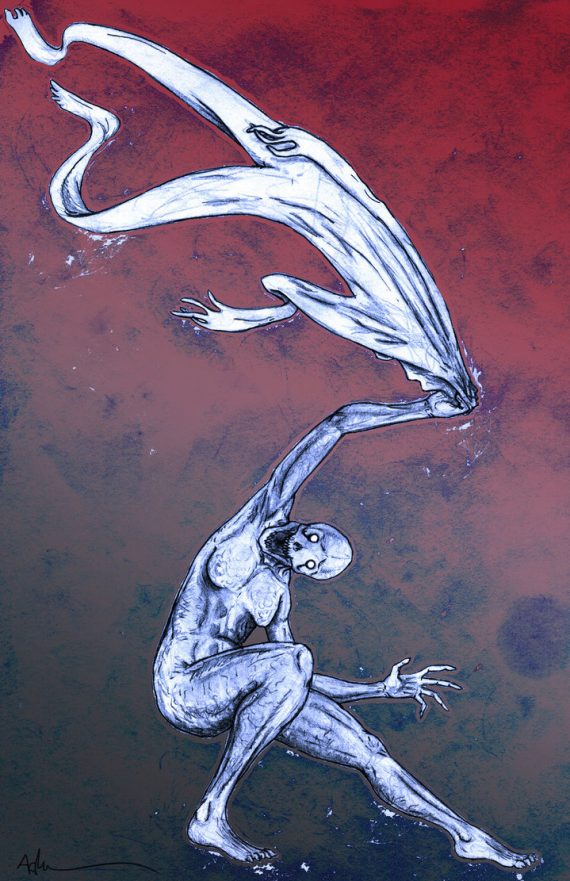 After slavery was abolished in the United States, some of the former African slaves settled on America’s East Coast from North Carolina to Florida. The mixing of traditions and legends brought from various regions of Africa created a unique culture, the Gullah. One legend of the Gullah from the coast of South Carolina and islands close to the coast is the Boo Hag. The Boo Hag is a vampire that doesn’t feed on blood, but instead sits on the chest of its sleeping victim, and sucks a person’s strength through their breath.

Boo Hags can enter the victim’s home through any sort of small opening, and when they do this creature – that appears as an old woman with no skin – sits on the victim’s chest and “rides” them. The Boo Hag victim will then wake exhausted. Although these red demons usually leave their victims alive so they can feed on them again, when they take all the strength they can, the Boo Hag steals the victim’s skin, and wears it as clothing.

If you think a Boo Hag may be riding you at night, there is a defense. Sleep with a broom next to your bed. The Boo Hag will spend so much time counting the individual pieces of straw they won’t attack you.

A popular good night saying of the Gullah is, “don't let de hag ride ya.” 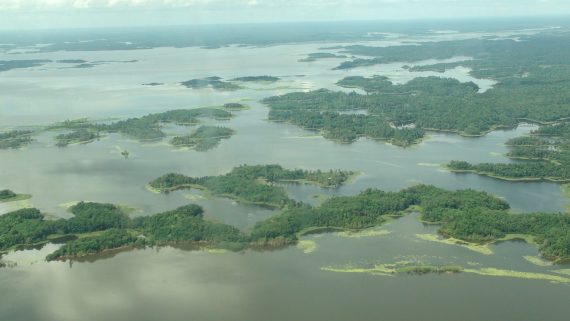 At the time of its construction (1927 to 1930), Lake Murray was the largest man-made reservoir in the world. At 41 miles long and 14 miles wide, it’s still pretty big, with a surface area of 50,000 acres, and a maximum depth of about 200 feet. It’s the right size to hide a monster, but as a man-made lake, the creature dubbed “Messie” understandably has its doubters.

The first sighting was Messie was in 1933 when Gilbert Little of Ballentine, South Carolina, claimed to see something large swimming in the lake. The most famous encounter, according to the book “Weird Carolinas,” by Roger Manly, was when something attacked the boat of Buddy and Shirley Browning. The couple had been fishing with their friend Kord Brazell when something the size of an alligator (“it was not an alligator,” Buddy protested) aggressively approached the trio.

“It tried to climb into the boat,” Shirley said in the book’s account. “Buddy beat it off with a paddle."

Although Buddy didn’t know what the creature was (he thought might be a sturgeon), he docked, and went back to his house for a shotgun. “We was going to go back after it and claim it, but we never did see it again."

In 1980, the newspaper The Independent News described Messie as a combination of a “snake and something prehistoric."

In 1990, retired Army General Marvin B. Corder claimed to the South Carolina Department of Natural Resources, that he and his son encountered a “serpent-like creature” about “forty to sixty feet long” with the “tail of an eel." 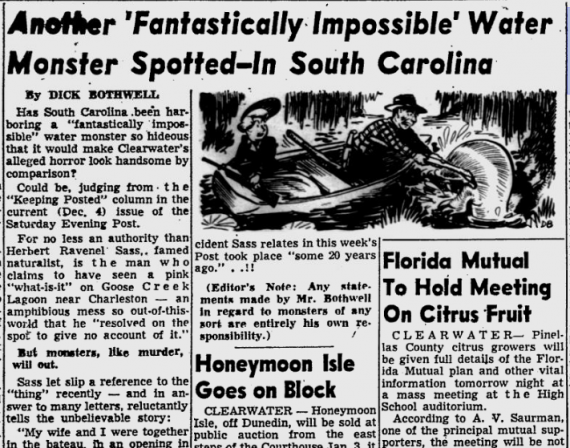 A 7 December 1948 article in the St. Petersburg (Florida) Times recounted a twenty-year-old story by novelist and naturalist Herbert Ravenel Sass who witnessed a pink “amphibious mess” in floodwaters near the Goose Creek Lagoon.

According to Sass’s account, he and his wife were in a flat-bottomed boat when they saw, “moving through the water growths below the surface an indeterminate shape.” When the boat was almost over the shape, Sass slipped a paddle under it, and lifted it above the water. “It was very heavy, about the thickness of a man’s lower thigh, of a bright salmon pink and orange color. How long it was I don’t know, because both ends remained under water.” Although Sass and his wife didn’t see a head or tail, they both saw a pair of legs, “like an alligator’s or salamander’s.”

“It may be … fantastic to suggest,” the newspaper quoted Sass as saying, “that there exists in these Carolina swamps and lagoons a species of giant amphibian of which no specimen has yet been taken.” 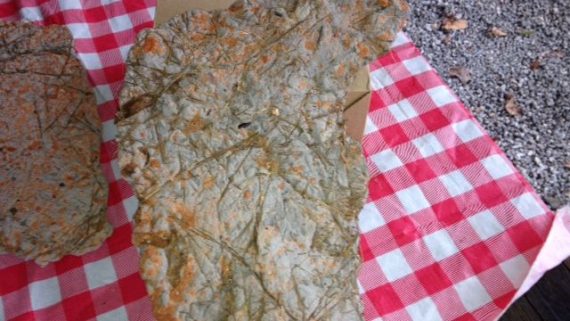 With 13 million acres of forestland, South Carolina is a prime spot for Bigfoot sightings. Although encounters with this big hairy fellow stretch back to pre-colonial times, with the encroachment of civilization came fewer encounters. According to a 2014 article in the Free Times of Columbia, South Carolina, the Bigfoot Field Researchers Organization lists only “50 Bigfoot reports in South Carolina dating back to 1968.”

But physical sightings, footprints, wood knocking, and gorilla-type nests have all been reported from the forested areas of the state. A group of cryptozoology enthusiasts in South Carolina, the Carolina Cryptid Crew, recorded what they claim to be Bigfoot cries around 3 a.m. in March 2015 in Oconee County. Are these the screams of the elusive creature? You decide.

Up next: South Dakota.