Fear and Loathing in Loveland: A Farewell to the Famous Frogman of Ohio

It was just the sort of thing you'd expect to happen while a young couple is out playing Pokémon Go at night, especially while lurking near the lair of a famous cryptid critter.

Sam Jacobs of Loveland, Ohio, told Fox 19 reporters that he and his girlfriend were playing the game near Lake Isabella, when they saw something in the water nearby.

What they saw, however, was no Pokémon.

In the photo, we see a dark figure, standing waist-deep in the lake's waters, with large bulbous eyes reflecting (or perhaps casting) light brightly enough that it is clearly seen reflecting off the water rippling below. 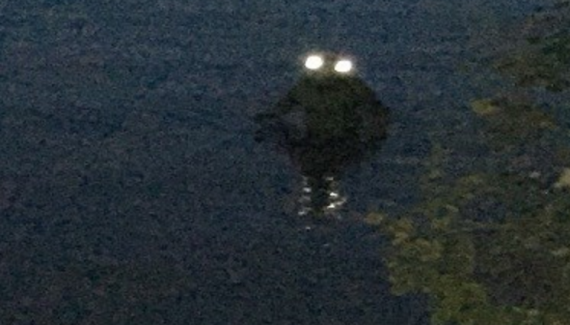 Who knows what the "creature" actually is... a model? A guy in a ghillie suit with a pair of LED headlamps strapped to his forehead? What matters is that the purported sighting is built around a much older legend about the area; it is also one that might easily have been solved well before now... though, as we'll see, the long-held tradition of "keeping the legend alive" may have effectively withheld the less sensational aspects of the story in order to do so.

The tale of the "Loveland Frog" has been well documented over the years; enough so that any elaborate description here isn't really necessary. Nonetheless, a few general facts about the fable will help illustrate the creature's alleged history.

The earliest known encounter dates back to May 25, 1955, at which time local legend tells of a businessman who observed three leathery-skinned, frog-like humanoids as he was driving the Loveland area. According to the account given by Jerome Clark in his Unexplained! Strange Sightings, Incredible Occurrences & Puzzling Physical Phenomena (2nd Edition, Visible Ink Press, 1999), the time was approximately 3:30 AM, and the figures were observed standing beneath a bridge near the Little Miami River. The two figures appeared to be conversing, and at one point one of the creatures lifted a wand-like device into the air, which emitted sparkling light that startled the observer. The man then drove to the area police department, and notified Chief John Fritz, who felt that the man's testimony was sincere.

A similar incident occurred later on August 21 of that year, four hours away in Evansville, Indiana. Mrs. Darwin Johnson was swimming in the Ohio River when she claimed a strange, claw-like hand reached up from beneath the water and attempted to grab her. Though seldom noted in related literature, it is worthwhile nonetheless to observe that the film Creature From the Black Lagoon premiered in theaters only one year prior to these alleged encounters. Might this monstrous silver-screen representation have served as inspiration for the stories of amphibious beasts lurking around the Ohio River and its tributaries around the same time? 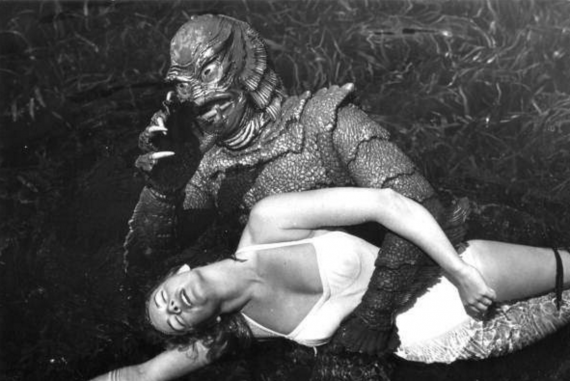 Fast forward to 1972, when a widely publicized incident occurred involving two Loveland policemen, an officer Ray Shockey, and officer Mark Matthews. On March 3, 1972 at approximately 1 AM, Shockey reported seeing a lizard-like object scurry across the road in front of his patrol car, which purportedly stood on two legs and observed him momentarily before climbing over a guardrail and disappearing. Within two weeks, Officer Matthews was driving in the same area along the Little Miami River when he observed what he thought to be a dead animal by the side of the road. Popular retellings of this incident state that as he emerged from his patrol car and approached the creature, it then "stood on two legs", and resembled some kind of frog or lizard. Matthews fired his pistol at the animal, and it purportedly dragged itself over the guardrail again, as in Shockey's encounter, and escaped toward the river.

So the legend goes, at least. However, there have been some contests to this narrative, namely testimony that officer Shockey himself was said to have given in an email interview a number of years ago, where he stated many of the "facts" about the case had been exaggerated over the years.

The relevant quote from the "supposed" email was featured by skeptical researcher Ryan Haupt in an article at Brian Dunning's Skeptoid website, though Haupt explained that he was unable to find the primary source for the quote. A quick search online, however, turns up that the source had been an article by Davy Russell for XProjectmagazine.com, which first appeared online back in 2001 (that article can be read here).

In the article, Russell wrote the following:

While preparing the Loveland Frog entry for the X-Project Magazine, numerous "credible" sources were consulted. Despite the detailed and mass circulation of this story, it was brought to my attention as being completely inaccurate and exaggerated.

In an e-mail interview with retired officer Mark Mathews, the second police officer that saw the bizarre creature in March 1972, he states, "There is absolutely nothing to the incident that relates to 'monsters' or the 'paranormal'. This entire thing has been habitually blown out of proportion...".

Perhaps some of the confusion lies in the fact that Russell does not explicitly state that he was the one who conducted the interview in question, although it seems that this is strongly implied in the excerpt featured above. Matthews also provided the following testimony about the incident:

"It was and is no 'monster'. It was not leathery or [had] wet matted fur. It was not 3-5 feet tall. It did not stand erect. The animal I saw was obviously some type of lizard that someone had as a pet that either got too large for its aquarium, escaped by accident or they simply got tired of it. It was less than 3 feet in length, ran across the road and was probably blinded by my headlights. It presented no aggressive action."

Here endeth the story, at least so far as any new suggestions that it had been blown entirely out of proportion, weaving dodgy rumors and urban legends around a few odd retellings of events over the years. That is, of course, until Sam Jacobs and his girlfriend's alleged encounter earlier this month, of which he stated that he would "swear on my grandmother's grave that this is the truth", adding that he wasn't sure "whether it was a Frogman or just a giant frog. Either way, I've never seen anything like it."

Jacobs' encounter with a "real-life Pokémon" prompted more than just renewed speculation about the existence of the Loveland frogman. In response to the story, officer Matthews once again came out of the woodwork, this time giving further details about the creature he and officer Shockey observed back in 1972.

Matthews contacted WCPO News in Cincinnati after hearing about the Jacobs encounter, explaining to reporters there that the creature had simply been a large iguana:

Mathews recovered the creature's body and put it in his trunk to show Shockey. He said Shockey said it was the creature he had seen, too.

It was a large iguana about 3 or 3.5 feet long, Mathews said. The animal was missing its tail, which is why he didn't immediately recognize it.

Mathews further explained that the animal might have been a pet that either escaped, or had been released into the wild once it became to large to care for. He believed the creature had taken residence near the warm pipes of a cooling facility at a local boot factory, "as a way to stay warm in the cold March weather."

For the most part, it does appear that the earlier email interview with Matthews jives with his more recent retelling of events. Matthews did add, however, that a local author who had written about regional legends in Ohio had ended the written version of the story right after Matthews shot at the creature, leaving out the part of the story where the lizard's body was recovered and later shown to officer Shockey.

The story that we are left with is much like a number of similar animalistic humanoids that populate American folklore, ranging from the "Goatman" of Maryland, to the beastly "Lake Worth Monster" of Texas, and a host of other creatures. And yet, the story behind the story of the Loveland Frog shows us more than just how cryptid yarns appear from time to time, based on these kinds of local legends. It illustrates the ways that folklore builds upon itself over time, even in the presence of facts which might refute the popular narrative. And it shows us that, at least in some cases, mountains can indeed be made from mole hills.

Or, in the case of the Loveland frog, that a lizard can evolve into an upright-walking "monster".

So it would seem that the legend of the Loveland Frog can indeed be laid to rest. The investigative exhumation we've presented here pulls forth the creature's remains, and finds something far less than the "monster" it had been purported to be; may this dearly departed denizen of the higher classification iguanidae, however it came to reside near Loveland in 1972, finally rest in peace.