Where do baby great white sharks come from? If you took a lucky guess and said “Long Island, New York,” book a ticket to Las Vegas ... you might be on a streak. An ocean research company has become the first to find a great white shark birthing place and baby nursery off the coast of Montauk, Long Island.

When we started this work... back in 2012, 2013, the real question was where are these sharks in the North Atlantic giving birth? Because that's where they're most vulnerable.

That’s Chris Fischer, leader of the expedition and founder of OCEARCH – an ocean research organization. If this were a shark movie, the opening scene would show a team from OCEARCH reeling in a 3,500-pound female great white off the coast of New Jersey in 2012. They tagged her, named her Mary Lee and released her back into the North Atlantic. 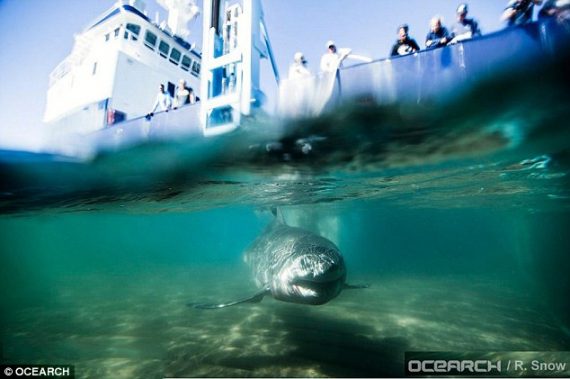 Fast forward to May 2016 and cue the scary music. OCEARCH tracking equipment picked up the return of Mary Lee to the same waters and Fischer wondered if she had come back to give birth. He quickly organized a tracking expedition along the New York Bight – that’s the correct spelling for an indentation in the Atlantic cost extending from Cape May Inlet in New Jersey to Montauk Point on the eastern end of Long Island where the waters are unusually warm from contact with the Gulf Stream. Perfect waters for shark birthing?

[This is the] most significant discovery ever made on the ocean. [It’s] the holy grail of the research. We have just been totally overwhelmed by the abundance here and the volume of sharks we're seeing.

An excited Chris Fischer describes in an interview the scene where his team hauled in pregnant females, OCEARCH’s first-ever male and at least nine shark pups, all of which were quickly analyzed, surgically tagged with a tracker and released – but not before giving them names: Montauk is a four-foot female, Hudson a five-foot male.

Is this a sign that it’s not safe to be swimming on the Jersey Shore? Never ask that question of an oceanographer like Fischer.

These whites sharks, they pick good places to drop off their pups. It means you are living in a very special place, critical habitat for the entire abundance of the north Atlantic.

OCEARCH can now track these sharks for at least 10 years. In fact, so can everyone interested in great whites as the website makes the information available to the public.

What happened to Mary Lee? The signal of the 16-foot-long mom – named for Fischer’s mother – was last picked up off the coast of the Carolinas.

Cue the upbeat music as this shark movie comes to a happy ending.

Aliens From Newly Discovered Planet Proxima-B May Be Here