A video made early last year is making the rounds this week, possibly because of recent anomalies that have been seen in Saturn’s rings or possibly because it’s a slow news week. Whatever the case, the interviewee is Norman Bergrun, a former longtime NASA and aerospace industry scientist and author of The Ringmakers of Saturn who claims there are huge spaceships in Saturn's rings that may be becoming dangerous to Earth and the rest of the solar system.

According to biographical accounts, Dr. Norman Bergrun worked for 12 years as a research scientist at the National Advisory Committee for Aeronautics (NACA), the predecessor to NASA’s Ames Research Center, in the areas of airplane thermal ice-prevention and roll stability laws for airplanes, missiles and rockets. He then spent 13 years at Lockheed Missiles and Space Company before founding Bergrun Berg run Research & Engineering in 1971. Author of two books and numerous papers, Bergrun wrote The Ringmakers of Saturn in 1986.

In that book, Bergrun analyzes photographs of Saturn’s rings taken by the Voyager 1 and Voyager 2 spacecrafts in 1980 and 1981. He then details his theory that the rings were formed by giant Electro Magnetic Vehicles (EMV’s) which are possibly being controlled by intelligent beings. He states that the 7000-mile-long elliptical ships are currently orbiting Saturn within the rings and emitting visible exhaust. Later analysis by Bergrun and others suggests the same or similar ships are in orbit around the Sun, Jupiter and Uranus. 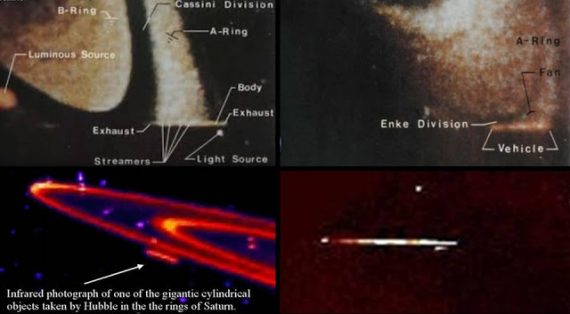 Bergrun refers to these ships as “living alien spaceships” because they maintain themselves and … this is the big one … self-replicate. It’s that ability that worries him now. He believes new ships are being created at an alarming rate that are taking energy from the rings of Saturn, Jupiter and Uranus and possibly getting ready to move around the solar system. Why? To continue to replicate, create more rings around other planets, absorb energy … you know, the usual things living alien spaceships do. Having 7,000-mile spaceships orbiting Earth, replicating and absorbing energy is probably not a good thing, which could be why Bergrun is generating one last warning (he’s in his mid-90s.)

There have been some recent activities in Saturn’s rings which create dots that could be connected to Bergrun’s theories. In April, photographs from the Cassini probe showed what looked like a rip in Saturn’s F ring that was caused by something exiting from the rings … probably a space rock but could it have possibly been a ship heading out to procreate and populate the solar system?

Then in June there was another Cassini photograph showing a strange “bend” in Saturn’s A and F rings. That turned out to be an optical illusion caused by the planet’s atmosphere absorbing light and acting as a giant distorting lens.

As a respected, well-educated and widely-experienced space scientist, Bergrun has quite a few followers of this and other theories from The Ringmakers of Saturn. The latest Mysterious Universe podcast's Plus extension talks about his theory of black aliens.

The video and Bergrun’s writings are interesting and thought-provoking for those open to the idea of massive, self-replicating, living alien spaceships coming to build rings around your planet and absorb its energy.