Perhaps less renowned than his contributions in prose to the to horror and "weird fiction" genres, Howard Phillips Lovecraft had also penned a number of poems throughout his career. Such poems often served as curious "notes and asides" in his broader Cthulhu Mythos, tying together little frayed ends in the twine that held together his unearthly imaginary realm.

One of his poems, "The Ancient Track", stands out in particular for its reference to an eerie form of natural illumination. The passage, excerpted here, reads as follows:

There was no hand to hold me back
That night I found the ancient track,
And reached the crest to see outspread
A valley of the lost and dead:
And over Zaman’s Hill the horn
Of a malignant moon was born,
To light the weeds and vines that grew
On ruined walls I never knew.
The fox-fire glowed in field and bog,
And unknown waters spewed a fog
Whose curling talons mocked the thought
That I had ever known this spot.

The reference, if you missed it, had been Lovecraft's invoking of the "fox-fire" that brought its eerie glow to the marshy landscape before the narrator, who is in search of the fabled town of Dunwich. 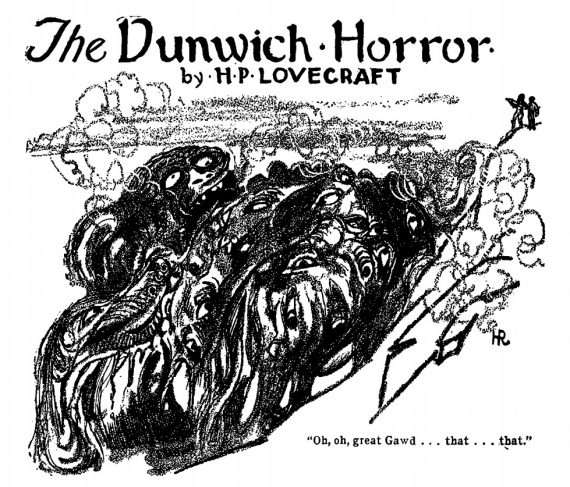 Foxfire is a bioluminescence that certain funguses are able to create, usually taking on a greenish or soft blue glow. The chemical processes that allow for this little natural marvel involve the oxidative enzyme luciferase, which can occasionally emit enough light to illuminate a path, or perhaps evne light the yellowed pages of an old Lovecraft edition, speckled with foxing (those are the little brown blotches that appear on the pages of old books).

I have always wondered about natural illuminations of the eerie kind, and their apparent associations with the fox in various traditions and folklore. Certain fine art has even played on this motif (as we'll see shortly). However, the notion was most recently brought to my attention again by my colleague Adam Olson of New York, who recently wrote to me with a few of his personal recollections about traveling in the East, and the appearance of a similar theme:

It’s "sun showering” up here in Gotham. I saw a film by Akira Kurosawa, Dreams, where the director as a child interrupts a marriage between foxes which happens only when it rains while the sun is out. As I only saw it a month and change before moving to Japan, I asked some people about that at my then local bar. It’s was a Nepalese bar so drew foreigners like myself from all over and locals.

I was surprised to learn that not only Japan has this legend, but even an Italian pilot knew the same story. So did the Nepalese owner. In fact, many places call it that, or the wedding of another animal. That’s quite peculiar that a wide spread of culture would call a weather phenomenon the marriage between two animals.

Adam is one of these individuals that can unravel so many spiraling connections between literature, film, folklore, and a variety of other sources that I would argue he may be one of the most "meta" thinkers I know. Glancing at the Wiki page for "Sunshower", I marveled at just how many countries around the world actually make this association between rainfall while the sun is shining, and the marriages of various animals (additionally, some traditions also recognize this meteorological phenomenon as coinciding with the birth of various animals as well, which nonetheless infers coupling).

It was at this point in his message that the idea of "the fox weddings" really took on an interesting turn, however, since a direct Japanese language reference to mysterious illuminative phenomena turns up:

When I looked up the Japanese word though, Kitsune no yomeiri (狐の嫁入り, "the fox's wedding”) to make sure I had the kanji right, an alternate definition was "ghost light".

Citing the Wikipedia article on "Kitsune no yomeiri", in an excerpt from Echigo Nayose (越後名寄), Adam produced the following additional description of the mysterious illuminative phenomenon that is often associated with a "fox wedding" in the distance:

"At whatever time at night, whatever place, on occasions when it becomes extraordinarily quiet, flames like paper lanterns or embers can be seen continuing far into the distance, far surpassing even one ri. They are quite rare in all places, but they appear occasionally in the Kanbara district. This is said to be the wedding of young foxes."

Indeed, the description of "flames like paper lanterns or embers" sounds eerily similar to the kinds of unexplained illuminations that appear at locations like Brown Mountain, North Carolina, where I have visited countless times in search of the fabled ghost lights said to appear there. However, Adam's descriptions of ghost lights associated with fox weddings brought something else to mind; a painting I recalled seeing in the collected works of Japanese artist Utagawa Hiroshige, which depicts a similar phenomenon: 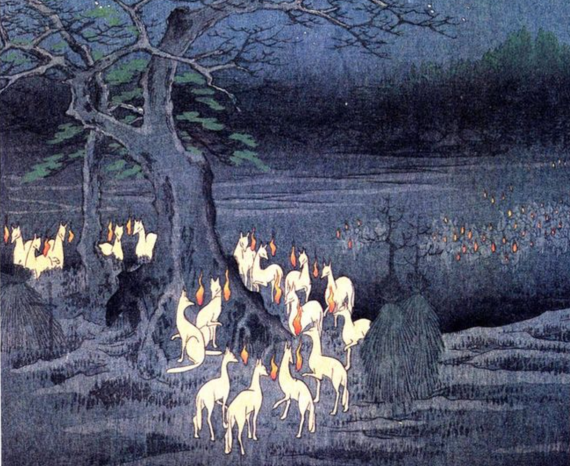 Conferring with Adam, he also recognized the painting. "Ah yes, that's from his 100 images of Japan series," Adam told me, noting that the painting dated back to 1857. "I never made the connection between the foxes and foxlight, I always thought they were holding New Year's candles."

As for the name "Foxfire", Adam further suggested that the etymology of “foxfire” probably stems from the earlier term “faux fire”, as Aristotle described it. "What the connection between foxes and mysterious floating lights is I’m not certain of in lore. I do know that foxes, often white ones, are the earthly messengers of the shinto god Inari (rice, sake, fertility)."

It does seem interesting that the idea of sun showers and its association with marriages in the animal kingdom is so widespread; equally interesting is the association between the fox or Kitsune, and the appearances of mysterious "ghost lights" from which bioluminescent fungi seems to also borrow its popular name.

With little doubt, probing a bit deeper into myth and history of various cultures around the world might turn up similar parallels between belief and unusual phenomenon, which perhaps have spread slowly in the passage of traditions between cultures over time.

Whales May Hold Secret to Menopause and Mamma’s Boys