Last year, archaeologists working at Durrington Wells--two miles north east of Stonehenge--announced that geophysical studies had uncovered the presence of a "Superhenge." Now, the first excavations at the site show that the massive circular structure--some five times the size of Stonehenge, and the largest ancient monument in the UK--was built entirely from wood. And perhaps most bizarrely, construction on the ring of wooden pillars was never completed; instead it was pulled down and buried not long after construction began.

The initial studies by the Stonehenge Hidden Landscapes Project suggested that beneath Durrington Wells lay giant stones akin to those used at nearby Stonehenge. As National Trust archaeologist Dr Nicola Snashall said to the BBC:

The response from the radar was so good that the team thought they were dealing with a whole series of stones lying on their side, buried beneath the bank of this ancient earthwork... What we've discovered are that there are two enormous pits for timber posts. They have got ramps at the sides to lower posts into.

With these two 1.5 meter-deep pits excavated, the team now believes that the anomalies they saw on radar imaging of the 500-meter diameter circle include between 200 and 300 6-7 meter timber posts that were sunk into deep pits around 4,500 years ago.

Similar to Stonehenge, the construction of the structure would have been quite a feat--yet something happened within just a few months or years that caused the entire thing to be pulled down and buried. 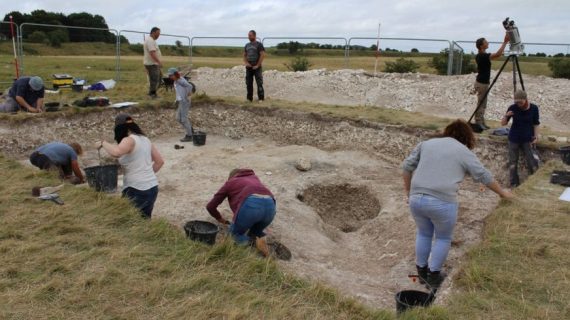 The two pits they have examined had both had their timber posts removed, before the holes were filled in with large blocks of chalk, before the entire circuit was covered in yet more chalk. At the bottom of one of the pits, archaeologists found that one of the prehistoric laborers had also buried his shovel, which was fashioned from a cow's shoulder blade. As a report in the Independent suggests, it is as though during a time of religious and political turmoil, efforts were made to literally bury the past.

In around 2,400 BC, there were significant shifts in religious direction in the UK as the nation moved from the Neolithic period to the Bronze Age. But precisely who was burying the past remains unclear--was it religious revolutionaries implementing change and concealing their own history, or were they suppressing the traditions of another culture?

That, and exactly why the ancient people of England were so big on giant circles is still a source of speculation.