While we debate whether our digital records will be able to be read by future generations or space visitors even 20 years from now, researchers have unlocked the secrets of a lost Mexican civilization known as the Cloud People written on a 500-year-old dried deerskin covered with plaster. Are we uploading to the wrong cloud?

The 16-foot-long deerskin manuscript – known as the Codex Selden - is one of only 20 codices (handwritten books) from Mexico’s pre-Columbian history. This particular codex was attributed to the Mixtec culture, a major but mysterious Mesoamerican group comprised of a a number of cities united for a brief time in the 11th century under a single king. Mixtec comes from the Nahuatl word Mixtecah, which means Cloud People, and their descendants that survived the arrival of the Spanish are still one of the largest indigenous groups in the U.S.

Unfortunately, none of the current Mixtecs knew how to open, let alone read, the Codex Selden. The long deerskin was covered at some point with gesso – a mixture of gypsum and chalk - before being folded into 20 pages. An unsuccessful attempt was made in the 1950s to clean it but was abandoned for fear of damaging it. 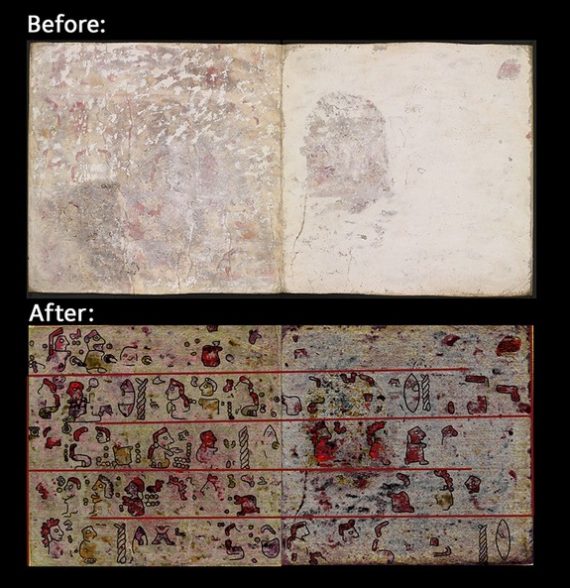 According to a study in the Journal of Archaeological Sciences, researchers at Leiden University in the Netherlands used a new technique called hyperspectral imaging (900 different wavelengths of white light are shined on an object and their reflections are scanned and analyzed) to see through the plaster for the first time. What they found was beautiful, shocking and puzzling, according to archeologist Ludo Snijders.

What's interesting is that the text we've found doesn't match that of other early Mixtec manuscripts. The genealogy we see appears to be unique, which means it may prove invaluable for the interpretation of archaeological remains from southern Mexico.

Unlike other Mixtec manuscripts which showed only males facing in one direction, the Codex Selden contains vibrant images of both men and women (many with red hair) looking and walking in all directions while carrying sticks and spears. Other unusual features include young siblings connected by a red umbilical cord and a recurring name symbolized by a knife and a cord. That’s just from the first seven pages analyzed using hyperspectral imaging, says study co-author David Howell.

This is very much a new technique. We've learned valuable lessons about how to use hyperspectral imaging in the future both for this very fragile manuscript and for countless others like it.

Will hyperspectral imaging help future beings read a CD, flash drive or Internet cloud? Nope. However, with the way things have been going lately, maybe there’s things we don’t want the next generations or space visitors to find out about us.

Radiation in Trees Could Help Date Earliest Events of Civilization